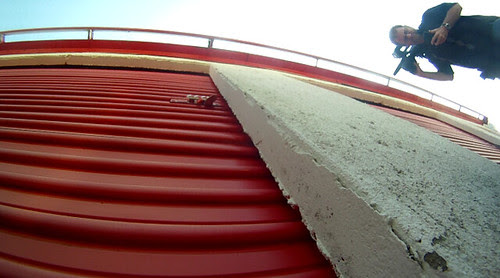 If you're anything like me, you've already wasted several hours of your life watching carefully-crafted whack-jobs gobble up other people's property. You know, the show with the beguiling Brandy, that dithering hipster and the angry dwarf that yells "YUUUUPPPPP!" all the time. Surely you've seen it. If you haven't, know this: it's changed the face of the storage locker industry. Now, when lot owners go to sell the residue left behind by deadbeat tenants, more than just your weird Uncle Murray shows up to bid on that box of broken toasters: soccer moms, drunken sailors, girl scout troops ... news crews. It's gotten so bad, yours truly was recently spotted loitering by these cathedrals of crap. But I wasn't alone! A certain reporter was along for the lurk, holding a GoPro and giggling like a schoolgirl.

Who can blame him? Re-enacting your favorite low-budget TV show can be a lot of fun, especially when you're surrounded by the southen fried hucksters we knew we'd find sizing up all that detritus. Speaking of terms you had to look up, you know this one? joie de vivre. It's a French term for 'joy of living' and at the risk of losing my curmudgeon card I must admit, I grinned like an idiot the entire time I shot this piece. See, 2012 has been a bitch and while I'm still mourning the loss of my prodigal father, and I found a dip into this celebrated dustbin served as a musty form of therapy. And you thought we were just padding newscasts! No way - everything we do is dripping with intent, whether we're hijacking the zeitgeist or simply fawning over bent sheet-metal.

But don't take my word for it. Watch the clip and see how reality stacks up to the best non-fiction story-boarding modern television has to offer. Or better yet, shit-can the Tv Guide and get outside. While you're at it, clean out that garage, would ya? I'm pretty sure that stack of coronet valves will bring big bucks on the open market, not to mention what it will score after it's aged for awhile in some cinder-block temple. Am I reading too much into this? Probably, but since this isn't my first TV show tie-in, I'm allowed to riff on the differences between cable casting calls and the true nature of man. Now if you'll excuse me, there's a box of vintage peanut brittle I think even I can unload on eBay. Watch my purse, would ya... 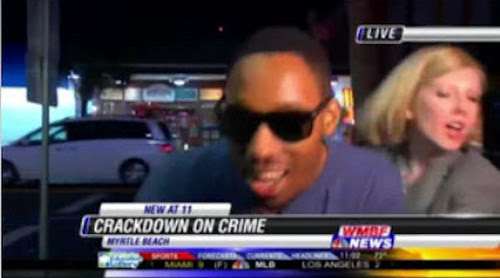 Make no mistake, we here at The Lenslinger Institute take the study of schmucks very seriously. But not every crime against the camera qualifies for full alert status. Some are just so stupid, they're better left unexamined. Such was the case with that unfortunate business in Myrtle Beach. You've seen the clip: a young reporter is in the middle of a live shot when an intruder stops her mid-drone. Grabbing the microphone from her hand, 20 year old Justin Moore takes center-screen and proceeds to best Kanye West...


"I AM THAT HIGHLY DIVISIVE INVECTIVE!" he did not quite yell.

Upon review, TLI's top schmuckologists found the interlude wanting. Though unwelcome if not vile, young Mr. Moore's outburst lacked the gravitas of a certified assault. The chosen pejorative was troubling, too. As we felt any undue attention might encourage others to take up this heckler's cause, we promptly tabled the matter and got back to watching Gunsmoke. But then the affected affiliate overreached and suddenly Moore seemed like the smartest guy in the parking lot

"I knew instantly something was about to go terribly wrong..." The emphasis is mine but the words come straight from the reporter's mouth some twenty four hours after the - ahem - attack. Unsure how to advance the story, she not only plays the victim's card, she slams it on the table and dances around the room. She then goes on to extoll the virtues of the victims' advocate, who called her to let her know A) Moore as out on bond and B) her fifteen minutes of fame were nearly over.  It's a tough call, certainly: You and your station are sitting on something viral and you're not sure how to capitalize on it. In this case, a simple mug shot would have sufficed, but by going with a breathless, stiffly delivered dispatch on how one woman is recovering from a harrowing night in the spotlight not only does a disservice to real victims, it makes us TV geeks look intrinsically silly. Just what Justin Moore wanted to accomplish in the first place. 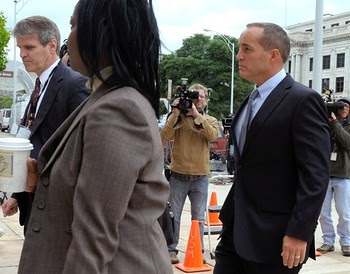 I was foraging for Cheesy Poofs when the scrum began to stir. Sensing the disturbance, I set aside my appetite and leaned out of the live truck. There, across the street, a clutch of rogues and pirates were once again assembling outside Greensboro's federal courthouse. Squinting into the distance, I searched for hoisted lenses. Twenty minutes earlier, I'd helped form a corridor of glass as John Edwards, his daughter, parents, lawyers and (for all I know) personal hairspray caddy filed past. I'd scoured their every glower as they entered the courthouse, a musty building where my kind and camera weren't allowed. Fine by me. Back in my station's live truck, a small cooler packed to near hurricane status held the highlights of my day. Now, with said snacks nearly in my grasp, I had to grab my fancycam and hustle back across the street. Dodging traffic, I couldn't help but wonder what my high school valedictorian was doing this drizzly Monday.

Chances are he (she?) wasn't playing Frogger with the planet's most unpopular millionaire. Once across the street, I slowed my roll. Hey, one doesn't bum-rush a federal courthouse - not unless one enjoys the taste of pavement with a side of highly shined boot. Me, I'm a lover (not a fighter), so I slipped in all quiet-like among the freelancers and network crews loitering by the entrance. At the top of the stairs, a man I'd come to know as Lord of the Feds was eyeballing his kingdom. At the curb, a few uniformed officers were standing around as only cops can. In the corner of my eye, I noticed a sound guy's boom pole was growing erect, its swarthy operator stroking the shaft. Now, I'm no network jet-setter with a list of fixer's phone numbers in my vest pocket, but I've taken in enough life through a tube to know when shit is fixin' to go down. Besides, a certain someone was fondling his own microphones nearby, a sure sign something recordable was about to happen. But what? All the expected players were already inside. Opening statements were on the day's agenda but for now, lawyers were still badgering possible jurors. Who could be rolling up now? Gloria Steinem? Nancy Grace? Carrot Top? (Ever seen 'em all three together? Hmmm? Have you?)

Don't answer. Just know that I was wracked with doubt as the camera crews drew close. Moments later our preternatural knack for self-preservation paid off when the Marshalls stiffened at the sight of an approaching sedan. The car slowed to a stop in front of the courthouse and though no one could really see inside, two dozen calloused thumbs twitched as tiny tally lights began to glow. My stomach rumbled as I pulled the vehicle into focus. That's when a driver the size of a Zamboni popped out and double-timed it around the parked car. Wondering just what I might say to Oprah, I loosened my grip and made sure I was rolling. Suddenly Andrew Young appeared, looking thick in the chest and pissed off everywhere else. John Edwards' opportunistic confidant returned the cameras' unblinking gaze with a prison yard stare of his own. I fought the urge to blow him a kiss and in an instant he was gone. But with photogs flanking the way, his six second journey to justice was well documented. In fact, it would bounce to outer space and back before he ever took the stand. I myself could not get back to my stash of snacks before receiving texts that I'd just made a cameo on Headline News. In the coming days, that fleeting footage would seep up and down the dial and flood the far reaches of the internet. Friends I rarely talk to would call and congratulate me, for what exactly, I do not know.
I'm just glad it happened when it did. Five more minutes and my furry mug would have been covered in smuggled cheese dust. 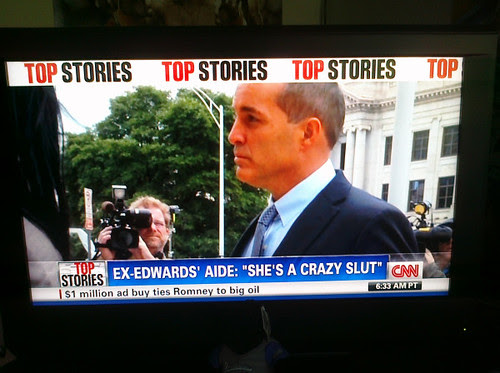 Then again, might have gone viral...
Posted by Lenslinger at 10:02 PM 2 comments: