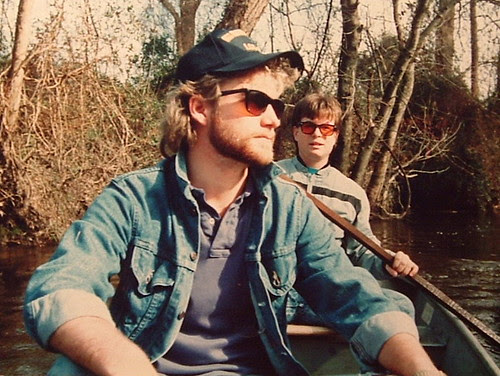 This week on Deliverance Theater, it's a very special Thanksgiving when Elbert and Durwood hit the creek for a little pre-meal mischief. All is well until an encounter with a noxious woodchuck spooks the duo and sparks a watery inferno that leaves the cousins frigid, withered and grizzled. From long-lost contraband to a brief (but diarrhetic) Bigfoot scare, good ole boy voodoo ensues as they stumble their way back to the double-wide. But will they make it to the table in time? Or will Big Mama get pissed and finally impound the Rally Sport? Tune in to find out...

Brought to you by AmberVision!
Posted by Lenslinger at 4:59 PM 1 comment:

Over at the Photog Nation's favorite watering hole, longtime contributor David R. Busse is sharing a treasure. Fourteen years ago, the Los Angeles news photographer went to a West Hollywood hotel for what he thought would be another soulless press junket. Instead, he was treated to a languid lunch with famed director Robert Altman. The legendary filmmaker instantly recognized the veteran photog as a kindred spirit of the lens. Over sandwiches, Altman spoke excitedly of his new film The Player and quizzed Busse on his own background...

We had an all-encompassing lunch conversation about the state of the entertainment industry, our favorite places in the Midwest (his was Michigan, for reasons I can’t recall), and the reasons I liked my job. Altman seemed to “get it” the minute I described a typical day. “No two days alike and you get to be producer, director and DP (Director of Photography) all in one, making little movies for the news...” he said.

By now, m-u-c-h has been written of the Michael Richards meltdown. No surprise, there - after all it ain't everyday one of TV's wacky neighbors lets loose with a racial tirade that would've made Archie Bunker run for cover. Couple that with Richard's spacey explanation on Letterman last night and you have the professional suicide of everyone's favorite hipster doofus. Bummer, that - I always preferred my Seinfeld taint-free. Hopefully by the weekend, some soap star will plow his Beamer into a plam tree and we can all guffaw at an invective-free mug shot. For now, Kramer's arse is on the hot seat and the cable nets won't quit until they've dissected his on-stage flip-out like the Zapruder film. What must the aliens who monitor our deep space TV signals think?

Beats me - I can barely keep up with the terrestrial analysis. Amid all that clatter I've yet to see much on the gadget that captured his career-defining moment: the lowly camera-phone. That's right, Kramer went down in flames via the diminutive lens of some civilian's cellphone. Sure, that hardly lessens the blow of his hurtful words, but I can't help but wonder if the sight of a schlub like me behind a fancy-cam may have stopped Richards in his hysterical tracks? Would the sudden realization that his implosion was being recorded for posterity be enough to make him wise up and shut his pie-hole? We'll never know. One thing I am sure of however, is we'll see more of this in the future. Camera-phones, YouTube, a grillion snarky bloggers ... slow-motion scandals will be forever be just a click away.

Remember that the next time you're tempted to pick your nose at that stoplight.
Posted by Lenslinger at 6:41 PM 1 comment:

Over at Under Exposed, Richard Adkins explains what an average Amber Alert can do to your day. It started with a carjacking in Rocky Mount. But this heisted whip had a baby on board, causing the mother to rightly lose her mind when she strolled outside to her a patch of gravel instead of her late model sedan. Who knows if the carjacker passed a TV station sat truck on his way out of town, but a battered fleet of the lumbering beasts did begin racing toward the City on the Rise. When the media arrived at the Police Department they found the story was almost over: A deputy found the car with the baby in it and was bringing the child safely back to Mom and Dad, who were huddled somewhere deep inside the PD. With the baby on the way and five different news crews laying in wait outside, the game was on. That's when Adkins' spidey sense started tingling and he followed a feeling around back. Moments later...

"I walked around the building and told the rest of the media pack they could relax, the little girl was inside. There was a lot of grumbling, a little disbelief and a few four-letter words."

Read the rest of Part of the Job.
Posted by Lenslinger at 8:26 AM No comments:

Daughtry and the Weave

Weeks before my recent Nashville dash, Weaver jetted to L.A. to catch up with another local American Idol alumni: Chris Daughtry. When he and Shannon Smith caught up with the local vocalist, he was laying down last minute tracks at a legendary L.A. studio. Behind the dials, an all but finished album featuring his own soulful material, celebrity guests aplenty and of course, his chrome-plated pipes. Now that the CD's about to drop, he and his new band will go on a whirlwind press tour of national TV, radio and live appearances. Not bad for a guy that was writing up service orders at the nearby Honda dealership a scant twelve months ago or so. He sure gets my vote for Best Year Ever!

As for the Mighty Weave, he ain't exactly parkin' cars. In fact he was just nominated for a local Emmy (or two), a natural by-product of his infinite enthusiasm for the craft. He's the only shooter I know who can be heard regularly squealing out in joy from a distant edit bay. On his L.A. jaunt he pulled off the now standard trifecta: reams of well-lit footage, impromptu digital photospread, scriptable tidbits and of course a few promos - all of which is now available via cable, airwaves and website. These days, precious little gets left on the cutting room floor. Call it customer service, viewer enhancement, or just plain transparency. Up next, an exclusive look at all our rental car floormats and restaurant receipts. Wait - I can explain all those burritos!
Posted by Lenslinger at 8:04 AM No comments:

Back to the Future 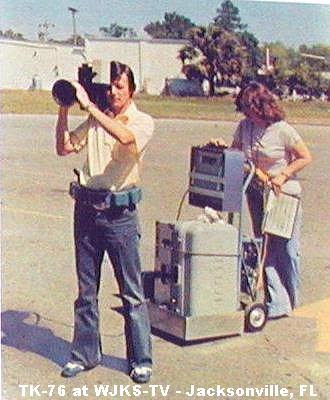 In the little seen sequel Back to the Future 2.5, Marty McFly travels back to the Year of the Bicentennial for a sweltering summer of minimum-wage newsgathering. He's about to topple rival Biff for the coveted weekend anchor spot when Doc Brown shows up and transports everyone to the scene of the Rodney King police beatdown. Ironically, Marty has to ditch his TK-76 camera in Jacksonville after he can't fit the massive gear into the Delorean. As a result, he misses recording his own startling version of the infamous 1992 attack and L.A. burns right on time. Co-Starring Ben Vereen as Rodney King and Ernest Borgnine as Darryl Gates.

Straight to Betamax. 2 stars.
Posted by Lenslinger at 8:53 PM 2 comments:

As promised, Jeff Varner weighs in with one reporter's take on my most recent Top Ten list, Things I'd Teach Rookie Reporters. Please, no wagering...


1. Buy me lunch sometime. I don't make any money either.

2. If I buy you lunch, two words I expect your selfish ass to say -- THANK YOU!

2.5 I'll carry your sticks, if every now and then you leave them in the truck.

3. Speaking of sticks, if a great moment is breaking and I miss it because you're setting up a friggin' tripod, it's Hammerin' Time!

4. If you're nice to me, I'll set up a story at a swimsuit competition and request you.

6. Talk to me like I'm two and I'll tell that reporter you hate to work with that you love it when they tell you what to shoot.

8. If I'd rather not be working one day, your sour ass disposition ain't gonna make it any better. Quit Yer Whining!

9. That cellphone vibrating your crotch as the perfect soundbite is about to rollout of a mouth needs to keep buzzing. Whispering "hello" in the middle of a soundbite next to a boom mic is rude and screws up those valuable nats you love so much.

From what I’m reading in the newspaper, it looks like 10-Codes are going the way of the clattering Teletype. That’s probably wise in a post 9/11, super-smart cell phone world, but the loss of these police scanner hieroglyphics makes the newsgathering world just a bit more antiseptic, which I suppose is only inevitable. For the uninitiated, 10-Codes are of those abbreviated alpha-numerics favored by first responders the nation over. “10-4” is of course the most ubiquitous example - it can mean everything from “Yup” to “Hey - the hot donuts sign is flickering at Krispy Kreme!” But “10-4” is just the beginning. Stashed away somewhere in your favorite photog’s news unit is a crumpled call sheet filled to the margins with countless other 10-Codes. When I first started in this silly business, a crisp 10-Code translation sheet was issued with every antique tripod. After all, you can’t beat the first on scene if you can‘t understand the cryptic directions pouring from beneath your news unit’s dashboard. Is it any wonder so many young shooters committed countless codes to memory before ever twisting every button on their aging cameras? It sure explain all that footage of squad cars idling at the corner of Fuzzy and Blue, doesn’t it?

Trouble is, the 10 Code was always a frighteningly malleable shorthand. What one department used for ‘Suspected Jaywalker’ could mean ‘Escaped Ice-Pick Slayer’ one county over. That lack of universality can really raise a person’s pulse, whether they’re reaching for a loaded service pistol in a dark alley, or juggling a cheeseburger and a cheat sheet in a nearby drive-thru. On 9/11 this discrepancy became painfully amplified when neighboring police and fire agencies couldn’t understand each other’s codes, all that intentional obfuscation only adding to the tragedy. Couple that globe-changing day with the onslaught of quantum-leap communications technology and the 10-Codes do indeed seem as outdated as all those Adam-12 reruns.

Perhaps we should let the 10-Codes go. Hell, I never learned ‘em all anyway. Instead I've always used my amped-up auto-reflector as distant emotion detector. I still remember standing beside my tripod outside a freshly razed apartment complex a good ten years back, smoke and hoses everywhere . With my shots in the can I was debating whether to stick around for any sound, when I noticed a nearby fireman engaged in terse conversation with the walkie-talkie on his shoulder. Listening in, I kept hearing a single, repeated 10-code. I didn't know what it meant but could instantly tell from the way they grimly bandied it about that not everyone had made it out alive. 10-65, I think it was - or 10-42 maybe. Perhaps now I can stop pretending I know what a fellow photog is saying when he starts spitting out letter-number combos like a bingo-caller on Steroids. 10-4?
Posted by Lenslinger at 9:35 AM 1 comment: