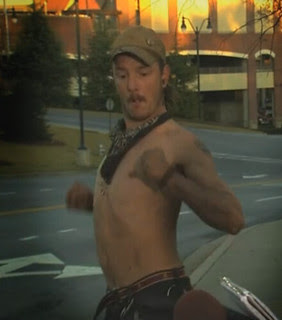 Pity the holiday news crew. Not only do they have to forgo the meals and merriment of Thanksgiving, but they have to deal with the vagaries of the chase on a day when most of us are resting in a pool of cranberry sauce. Just ask CBS Atlanta's Jon Goss and Jeff Chirico. They were moments away from going LIVE(!) outside an unsuspecting Wal-Mart when something crazy their way came. Well, "crazy" may be an overstatement. Lots of perfectly sane people take offense at crews, though not all threaten to defecate.

How it all started remains a mystery, but the Vimeo clip below clearly shows one of Metro-Atlanta's finest transients locked in a war of words with our intrepid news crew. Reporter Jeff Chirico looks worried, annoyed and rightly so! Photographer Jon Goss isn't quite so visible, probably because he's got his hands full shooing the stranger away from a soon-to-be-hot camera. It really isn't clear why the bare-chested young man has taken such umbrage, but it's easy to see he wants to have a go at Goss.

"Ya ready to FIGHT?" he asks. "I got nails in my ears!" he warns. "I ride freight trains, kid!"  To drive home his point, this economy class traveler breaks bad, deftly exhibiting the kind of spastic physical mastery that scored him a three day gig as Kid Rock's body-double in that cinematic masterpiece, Joe Dirt.

He flexes! He hops! I'm pretty sure he sharted! Through it all, Goss stands his ground while Chirico scowls, threatens to dial 911 and finally signals to his producer (who I'm SURE was enjoying the show) that the live shot they're counting on wasn't going to happen. This seems to appease the shirtless intruder, for he soon grabs his sea-bag (stuffed full of unused deodorant and used Joe Dirt DVD's, I'm guessing) and prepares to wander off, where he'll no doubt find a hapless drive-thru guy to go off on.

But something weird happens on the way to Mickey Dee's. Before exiting stage-right, Kid (Crack) Rock drops his bluster and virtually BEGS Chirico not to call the cops. Guess the PO-leece are as impressed with this dude's drunken wrestler routine as our journalist friends were. Here's hoping a fellow meth-head soon robs him of his last bent Marlboro, if not, perhaps, his chastity. But, hey, who am I to wish ill on some half-baked nutbag? I'm sure he's a warm, thoughtful human being. In fact, he's just the kind of guy I'd like to lock in a crowded control room during a newscast - if only so the house cats could better understand what it can be like to going LIVE(!) among the masses. Schmuck!

Confrontation During a Live Shot from Eric Carlton on Vimeo
Posted by Lenslinger at 9:37 PM 7 comments:

Rolling in the Deep 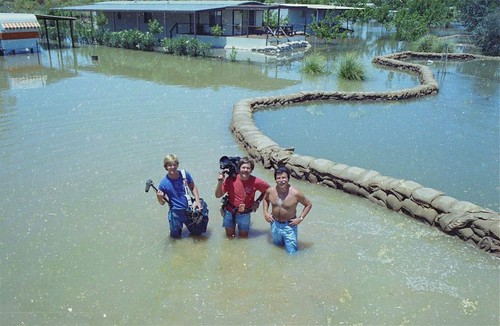 Boom microphones burst into flames if they dip into his shot.

He can change receiver frequencies using only his mustache.

Wherever he sets his tripod, begonias soon cluster.

Batteries grow stronger when placed in his pocket.


Oprah's photog comes over and jumps on his couch.

His every whim comes with its very own time-code.

He once fed an entire village from a single fanny-pack.


Men on the Street stop to ask him questions.

He is The Most Interesting Cameraman In The World and his name is David R. Busse. Back in the summer of 1983, he even caused floodwater along the Colorado River to evaporate - but not before stopping to pose with a couple of mere mortals...


"We had no satellite trucks or other live capability from the California-Arizona border area, so we spent three weeks flying out there each day, shooting a story and flying back, to feed our footage from an airport tarmac in Riverside, Rialto or wherever..."

Sure you did, Busse, sure you did. Stay thirsty, my friend.
Posted by Lenslinger at 10:27 PM 3 comments: 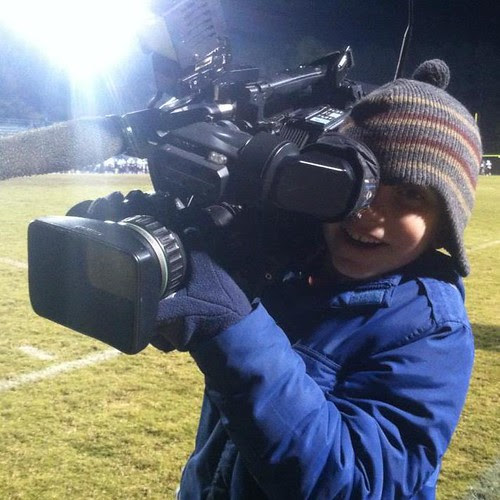 This isn't the first time nine year old Carter has manned a fancycam and unless authorities step in, it probably won't be the last. And to think it happened on a high school football field, where risky visual stimulants can render innocent youngsters agog with possibilities. Wanna capture a kid's imagination? Give 'em a gizmo that captures action, bends time and mines the horizon. But beware, that kind of magic can befuddle an otherwise focused child's attention. Before long, your little mathlete could lose interest in equations and then one day you find him deep in the glow of a local newscast... heckling reflections, berating bad light and shot-calling axis-fractures. It isn't pretty, and I would have hoped a full grown photog like Tommy Normanly would have known better. But dude says he has a damn good reason for handing his boy an apparatus that should come with a caution... (SURGEON GENERAL'S WARNING: Use of this device may malign the spine, interrupt deep sleep and slow overall career trajectory.)

"I'm hoping by letting him play with it now, it will be like locking him in a room with a box of cigarettes. He'll hate it, get it out of his system, and never want to touch a camera again."

I hope so, Norm. Otherwise I'm calling Social Services...
Posted by Lenslinger at 8:37 AM 2 comments: