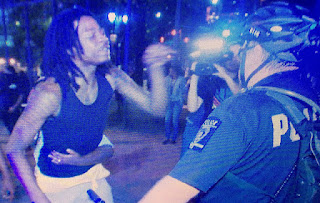 As grown men go, I'm just not that brave. My brother Richard, a retired firefighter, is. He's the guy you want by your side in times of danger. I'm the guy that can get you through that first round of Jeopardy.

But place a TV camera on my shoulder and my very DNA changes. It isn't courage that consumes me when I'm within the lens. It's curiosity. There's no valor involved behind that glass. It's a quest for access. I've no flair for daring in any other situation. But a face full of viewfinder is a suitable mask for a guy like me. I can don that disguise and weigh into any fray as if I'm a treasured guest. It's the fortitude born of a million deadlines met, an aberrant behavior caused more by boredom with the norm than any notion of nobility. Don't get me wrong: I could never be one of those far-flung war correspondents. But when shit goes sideways in my little 'burg, you can better believe I want to be there, if for no other reason than to see it for myself. Those of us with tripods in our trunks steer into the weird with only one agenda: get a better shot than the other guy or girl...

It's been a solid week since the city of Charlotte damn near came undone. It began when local cops shot and killed a black man, Keith Scott. As accusations of institutional racism and police overreach swirled around the Queen City, a couple dozen protestors grew into hundreds of unhinged citizens. Roving bands of demonstrators flooded uptown and disorder ruled the day. It went well on into the night and I was there with a TV camera in tow. Seven days later, I'm still unpacking impressions and trying to figure out how to write about it. The best I can do for now are these scattered thoughts:

Think what you will of the protestors, but don't lump them all into one category. Like the media itself, they cannot be categorized into any one genus or phylum. In my time among them, I witnessed everything from rancor to grace, apoplexy to aplomb. While many were intent on anarchy, others pleaded for peace and understanding. Some wanted the eyes of the world to see what was happening. Others wanted to wipe the streets with this Caucasian cameraman. In one night alone, I was threatened, blamed, pushed, high-fived and even hugged by demonstrators of every denomination.

Despite the incident that led to the unrest, the Charlotte-Mecklenburg Police Department showed unbridled restraint in the face of chaos. Suited up in riot gear, they formed a line and stood silently as protestors screamed in their faces, challenging their convictions, character and courage. Sure, they threw tear gas and flash bangs when they felt overwhelmed, but had they used their batons rather than their shields, this city that I've come to know and love would likely have burned. Ask yourself: Could I have kept my cool while a mob of angry faces screamed 'murderer', 'bigot' and 'demon' at me?

Tear gas is no trifle. When police began lobbing canisters last Wednesday night, I was too close for any hope of comfort. Fueled by adrenaline and competition with the other news crews, I stayed put for far too long and sucked a couple lungs full of the noxious fumes. I coughed for a half an hour, my eyes welled up with acrid tears and I wore a large snot-stain on my shirt for the rest of the evening. At one point, I hunkered down with my camera at my feet and wretched. A man who looked to be homeless appeared out of the mist and poured some of his bottled water on my face. Then he vanished into the crowd.

Somewhere amid the threats, tear gas and fatigue, I found myself re-examining my career path. Less than two months ago, I held the title of manager and as such, spent all of my time inside, far from the vagaries of the chase. 'Was I not better off playing the part of house cat?', I wondered as I zigzagged through a throng of SWAT cops and demonstrators. Was I not safer navigating the shoals of office politics, rather than dodging wide-eyed marauders and burning trash cans? Would I not have been wiser to stick with managing millennials instead of this thankless life of sweat and peril?

'Naaah', I thought, wiping my eyes with my shirt collar. I'm safer out here than holing up inside any newsroom.

After all, I'm just not that brave.

(The viewpoints and opinions posted here do not reflect those of my employer. They are my thoughts alone.)
Posted by Lenslinger at 8:26 PM 6 comments: