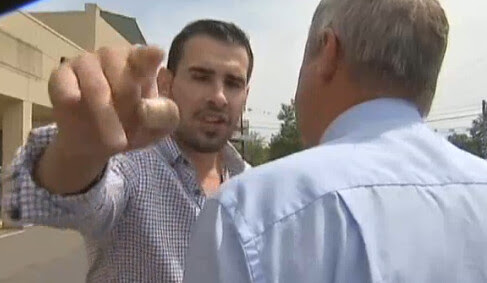 Chances are reporter Brian Thompson and his (oddly) anonymous photog weren't expecting a fruit basket when they arrived outside New Jersey's Wayne Diamond and Jewelry Center, but did they deserve a beat-down? We here at The Lenslinger Institute think NOT. But then again, we're a crack squad of top schmuckologists; well versed in the art of the grab and ever vigilant for signs of news crew abuse. Which brings us back to that parking lot in Jersey.

That's about as far as the journalists from NBC 4 New York got, before the staff of the aforementioned jewelry joint went all Sopranos on 'em. Maybe it was the brazen way the journalists pulled up in broad daylight that offended their sensibilities. Perhaps their trousers were just too tight. Could it be  they were back in the Old Country, where slapping around nosy newsies was a national past time? Whatever the case, these indignant gem pimps proved to be just a couple of thugs. Who knew? But enough of my blathering, let's go to the videotape!


There's a delightful moment at 0:18 when Jeweler #1 (we'll call him Penelope) tells Thompson he cannot enter the store. Thompson asks which store - a question so loaded it momentarily stymies Penelope, who then warns Thompson not to 'piss me off right now!" "When would be a GOOD time to come back and piss you off?" Thompson did not ask.

Around 0:32 Penelope tires of engaging Thompson and turns to the unnamed cameraman. "Do you want me to punch you in the face?" No doubt Penelope meant it to sound threatening, but it struck me as what it must feel like to be bullied by Borat. High Five!

At 0:44, shit gets real. Penelope moves in close to the lens, then sucker punches the (unidentified) news shooter. It's a cheap shot and poorly executed. Dude behind the lens was probably right to hold his fire, but I sooo wish he'd brought his foot up and kicked Penelope in the Hiddenites.

At 1:02, Jeweler #2 (we'll call him Nancy) emerges for a tour de force performance. Raising his voice and feigning friendship, Nancy approaches our man behind the camera with deceptively good tidings, only to grab at the lens once he gets within reach. No doubt Nancy felt pretty cool, but I could only think of the Festrunk Brothers.

Finally, at 2:06, Nancy reappears for an encore performance. When asked by Thompson to identify himself, Nancy instead grabs the microphone. What follows is a grappling match that deserves to be included in the next Summer Olympics. Sure, it goes nowhere, but can it be any less mind-numbing than all that volleyball NBC is foisting upon an innocent nation?

So, did we miss anything? Probably, but while our disdain remains, the selection committee here at the Institute's elders have grown weary of the clip and would like to return to their rock-scissor-subpoena tournament. Schmucks! 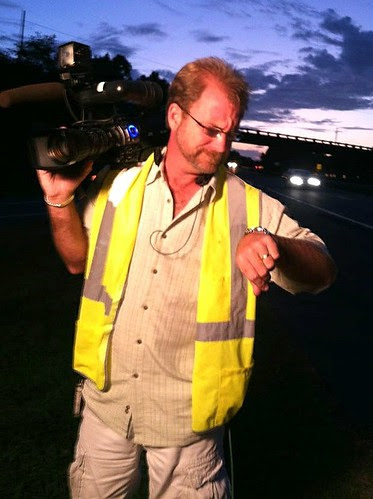 Morning News Crews: We do more before nine a.m. than some people do all day. But then we pass out in a pile of dry cereal dust around quarter to three, roll off the couch and just hang there upside down until the dog begins licking us before it too collapses into some kind of sugar-induced stupor. At least I think that's why I woke up french-kissing the family poodle. (He smelled of Fruity Pebbles.) Either way it was a bonding experience I don't regret, even if I do have a sudden urge to piss on every mailbox in the neighborhood. But that's not important right now. What IS important is that I finish this entry before bedtime rolls around. Look, it's almost seven already! Hey, where's my sleep mask?!?

SO HELP ME, IF ANY OF YOU WORMS TOOK MY SATINY PASSPORT TO NAPTOWN, I WILL STRIKE DOWN UPON THEE WITH GREAT VENGEANCE AND FUR-I-OUS ANGER!

A-hem. Sorry to go all Tarantino back there. I've just been a little on edge ever since I started working the overnight shift. Hmm? Yeah, I know it's only Monday, but I'm three hours in the hole already! Understand, I don't get a lot of sleep to begin with. (These screeds don't write themselves.) I got a caffeine habit, a writing compulsion and early onset of that weird old man thing where you wake up at dawn and wanna plow shit. Turn all that upside down for a week of overnight shifts and you have the makings of a mid-Wednesday breakdown. I can't afford that! I gotta move an eighteen year old into her first dorm room on Friday. At this rate, I'll be even more zombiified than the rest of the hollow-eyed Dads schlepping trunks and comforters up a non air conditioned stairwell! What will the children think? Ahhh, it doesn't really matter. By then I'll be so brain-dead I won't be able to discern between a grateful hug from my oldest child and a terse invitation to leave campus NOW.

Why, already, my density is intensifying. Earlier I was napping at an especially long red light and when the inevitable horn behind me began blowing I awoke to find three dried-up I.Q. points stuck to my chin. I can't spare those! I'm already a decade late on a book I'm supposed to be writing! I use to yell out answers (in the form of a question) during Jeopardy! each night. Now I need flash cards and a service animal just to get through Wheel of Fortune! WHEN WILL IT STOP? Better yet, forget I asked.  It's damn near eight o clock and I'm late for the hay. Somewhere out there a grassy overpass is in need of a pre-dawn camera crew and at this rate I'll still be typing when the producers start counting down in my ear. Soooo....

Kill that light, would ya?
Posted by Lenslinger at 7:13 PM 2 comments: