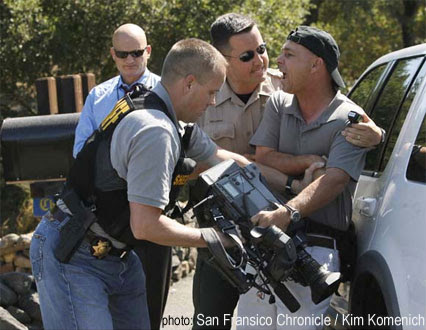 I'm reluctantly holding back on issuing a Class 5 Schmuck Alert on the Napa County Sheriff’s Department for one reason: a veteran reporter acts like a total dillweed on the now obligatory videotape. More on that later. For now, the facts: Shortly after KGO-TV's Wayne Freedman and Craig Southern arrived at the scene of a fire this afternoon, law enforcement officials rescinded their invitation. Trouble is, the news crew had no invitation. See, breaking news doesn't come with an RSVP; when newsworthy events occur in a free society, journalists can go anywhere (a private citizen can) in order to record, document and disseminate the details. It's a little thing we call Freedom of the Press and a bunch of guys in powdered wigs and knee socks thought it was important enough to include it in a seminal document two hundred and thirty some years ago. You'd think by now, the Napa County Sheriff's Department would had received the memo. Apparently not.

Of course, I wasn't on that California cliffside this afternoon. (I was interviewing a Russell Terrier in a surfboard sweater, if you must know.) Thus, I can only guess at what preceded the recorded take-down, the sequenced still shots, the reporter's account and the internet chatter now swirling around this temporary detainment. Taken as a whole, it's a multi-media conundrum that puts some product launches to shame. It's also a techicolor testament to the politics of spot news. Increased adrenaline, pack mentality, competitive paranoia and power grabs: these highly reactive factors are all in play when calamity, cops and camera crews and collide. As a reformed Southerner, I myself am probably a bit too passive by the flashing lights, but then again I've always found amannerly disposition and good ole boy slouch got me alot farther than screeching fits and attempted levitation. Still, it is hard to debate Constitutional Law with a guy trying to twist your arm behind your back.

Which brings me to my lone caveat. I have every reason to believe the Napa County Sheriff's Department was wrong in their detainment of KGO's camera crew - an assertion reinforced by the fact that both reporter and photog were soon released with no charges filed and little explanation given. But to the average viral video viewer, the guilt surely lies in the Fouth Estate. Why? As the footage begins, reporter Wayne Freedman is on the verge of apoplexy: screaming, squirming, demanding legal counsel. That's all well within this allegedly legendary journalist's rights, but methinks he'd be better off if, instead of behaving like Rick Flair on a ringside tear, he'd follow my folks wise advice and 'act like he had some smarts'. Perhaps then, these increasingly common clips of 'Cops Gone Caveman' wouldn't be so damned wince-inducing to watch. Just sayin'...
Posted by Lenslinger at 7:28 PM 4 comments: While I remain a staunch supporter of the heavy glass, the boat anchor on my shoulder was no match for this backpacker's souped-up handycam today. Justin Quesinberry's his name. I know because his ID badge stuck to my face for a second this morning. The two of us were floating among the detritus of an airport shuttle bus - a stout vessel stuffed with City Council members and driven by a man who, apparently, had to pee very badly. Look, I'm all carting politicians around to see what they're voting on, but who sightsees at Mach Four? What should have been a quiet drive around the runways felt like 'rookie night' on the Vomit Comet. I didn't so much run my camera as ride it. From scoffed-at speeds bump to last-minute lefts, our driver and his bulging bladder kept me in Zero-G for most of the voyage. Ricocheting across the cabin, I barely escaped landing in the bus' shallow stairwell, but stepped on News & Record reporter Margaret Banks' foot in the process. Sorry, Margaret - it was either that or fall into the mayor's lap again and that's just not how I roll. Tell you what, I'll go hang with the rest of my ilk living their dream underneath the luggage rack. That News-2 dude on the floor seems to have found a way to steady up. Too bad he's sitting in gum.
Posted by Lenslinger at 7:35 PM No comments: 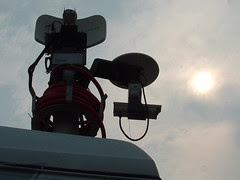 Someone give Al Gore his money, it's getting wicked hot. How hot? Today I saw a squirrel soaking his nuts in Gatorade. I would have captured it on video too, had I not been busy french-kissing the air conditioning vent. What can I say, it was a long stoplight. At last I think it was. Truth is, time goes all slow-mo when every outdoor assignment comes with a brand new case of swamp-ass. And don't talk to me about wardobe, either. I'm already dressed like a third grader! One more layer shed and I'll surely spark a flurry of suburban Bigfoot sightings. Then I'll never get these Man on the Street interviews done, no easy feat when your face is wrapped in a soggy beachtowel. Fact is, there's no way to pull off a smooth focal move when sweat's pouring off your brow in sheets, your upturned viewfinder cup a flickering cauldron of saltwater. Don't bother looking for shade either, that's where the oven-blast really settles. A few more weeks of this and we'll have air so thick you can hang art off of it. For now, it's all I can do not to Stop Drop and Roll every time I fall out of Unit Four. Just when I'm sure my eyeballs are about to melt, I realize I'm not on fire after all. It's just a July Tuesday in the Carolinas. Wait until August, when SwelterFest begins...
Posted by Lenslinger at 7:31 PM 4 comments: 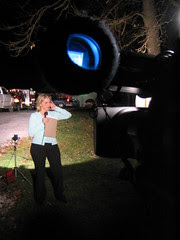 In the taxonomy of TV News, there are house cats and there are tunnel rats. I'm proud to be of the latter species, though the feline set does smell better at the end of the day. Why wouldn't they? They haven't been clinging to a ditchbank listening to paramedics gossip, they haven't dodged the ire (and saliva) of shackled crackheads at dawn, they haven't wrestled a dying live truck to the side of the interstate at 70 miles per hour. I've done all three and while it may render me pungent by sunset, it also makes me a whole lot cooler than those goobs back in the newsroom. I'll tell 'em that to their face too ... just as soon as Oprah throws it to a break and I have two and a half minutes of their undivided attention. 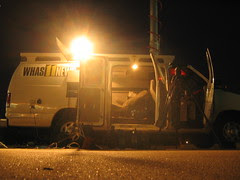 But hey, I didn't log in to denigrate the soft and the weak. I can do that at work! No, I just toggled through the accounts of a few Flickr friends and came away inspired by their strangely familiar frames. Take this shot, for example. I call it 'Live Truck at Night'. While not too sure from where it hails, I dare say I can predict where it's going.. the structure fire, the Attorney General's office, that amorphous black hole of an abandoned crime scene we call important... no one said the voyages of the Live Truck Enterprise had to make much sense; they just had to make slot. That's TV talk for deadlines and while we exert great energy damning them all to hell, we'll downshift and punch it in the breakdown lane of life just to avoid missing one. Crazy, I know....

...but that's how it goes when you're a broadcast packmule, a TV stevedore, a caddy to the overly coiffed and understudied. Most times you're invisible to the civilian world, reduced to background by an audience that sees you as little more than a logo'd and roving tripod of sorts. That's cool by most lenslingers - as only fools heave the glass for money or fame. Instead, we do it for the view: a flickering vignette that hits at the top of the hour and usually involves pretty people and the smoldering remains of someone else's dream. If that seems too melodramatic, then you've never watched an old woman in a housecoat pick through the soggy hellscape of what used to be her living room. Do that enough times and you won't even flinch when she asks you what time your coverage will be on - despite the fact her TV set is now made of charcoal. 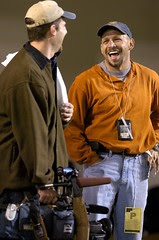 Still, it ain't the unfettered access that keeps me loading up and heading out. Rather it's the paycheck I've foolishly come to depend on. While there are easier ways to make a buck, few offer the benefits of a life spent on the fringes. For there is where I feel at home, whether it's on the sidelines of a scheduled game or by the chalklines of fresh victimhood, the small talk is often the same. Scuttle butt, dark wages and gallows humor for all. It may not be the kind of small talk fodder I'd recommend to my kids, but as conversation it is unparalleled, the kind not found in your average cul-de-sac. So, excuse me if I seem a little distracted in the newsroom, as it's not my natural environment. I'm much more at ease out on-scene, where the only pre-requisite is a lack of invitation and the belief that you belong there. See ya at the rodeo...
Posted by Lenslinger at 7:53 PM 2 comments: 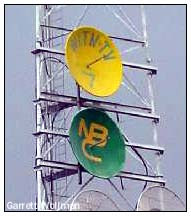 In his fictionalized biography, a young Howard Stern locks horns with a Machiavellian manager he aptly named 'Pig Vomit'. When I first saw the film I considered suing the King of All Media, for he was obviously stealing scenes from my very own corporate nightmare. See, at the time I was two years deep into a career in Promotions. Instead of chasing drive-by shootings and Easter egg hunts, I was cranking out promo tripe for The Man - a most vindictive dictator we referred to simply, as 'Satan'. It was a dark time, one that only ended for me when I finally ran away screaming to a Piedmont newsroom. But while I sought refuge in a badly-idling news unit, many of my colleagues remained - doomed to suffer under the reign of a widely-reviled despot. That's their business and I wished them well, but I couldn't help empathize for them every time I visited Downeast and caught sight of a news product that seemed hopelessly mired in the Spring of 1982.

Well, 'Satan' finally got the boot. After running his affiliate into the ground with on-air contests that would make a middle-aged AM radio deejay wince, the GM in question no longer holds keys to the corner office. Glory be to Gray Communications. Ten years gone myself, it really isn't my business to care - but even a decade away doesn't erase the memories of my stint in a place we used to openly refer to as the 'House of Pain'. Thus, I'm moved to throw a little kerosene on the bridge I firebombed so long ago, for life is too damn short to cower before a pear-shaped radio hack with a bad combover. So congratulations, Eastern Carolina, you just received a sizable gift. Soon, maybe that wedge of light between 8 and 9 will offer more than chintzy call-back contests to enter, more than the very latest in twenty year old news graphics, more than utter contempt for you the viewer. And for the many of you who long ago programmed the number 7 out of your line-up, give 'em another chance, for there are many talented people there, ready to show you what all they can do.