What Are YOU Smiling At? 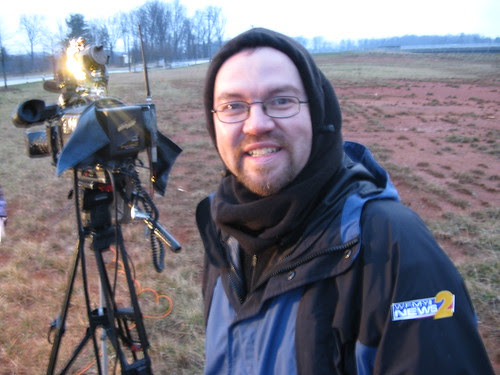 By now, you know my usual mood to be somewhere between distracted and increasingly vexed. I'm cool with that. Only problem is, I can't blame my eternal surliness on The Job. Not with this guy in my peripheral. Meet the Emmy Award winning Austin Gwin - the grinning yin to my angst-ridden yang. I can't tell you how many times I've mumbled under my breath at the injustice of it all only to look up and see this goofball lope up with a smile and an extra light. At train wrecks, operating rooms, city council meetings -- How's he do it? What fills him so full of mirth? After all, this dude trudges through three times the number of live truck orgies than me and I've never once seen him roll up in a bad mood. Maybe it's the baby boy at home, or the fact that his lovely wife was smart enough to leave the biz. Whatever it is, Austin Gwin is one happy cat. Don't believe me? When I snapped this photo of him earlier this evening, we'd both spent a long, cold, rainy day covering a story that brought no one joy. Through it all, Austin kept his chin up, his gear dry and me from wrapping my shivering lips around the live truck's exhaust pipe...

The nerve of that guy.
Posted by Lenslinger at 10:31 PM 3 comments: 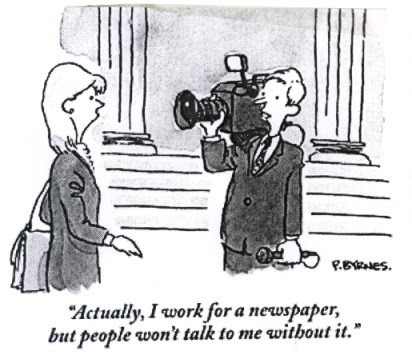 If you heard a giant whiffing sound emanating from the offices of our nation’s newspapers today, don’t bother dialing 911. It was merely the sound of thousands of print employees attempting to high five each other, over a recent piece in Broadcasting and Cable. Seems the article in question heralds the demise of TV stations that crank out cookie cutter news, citing the rise of on-line alternatives and the drop in loyal users. It’s an epitaph the ink-stained wretches know all too well, as lately traditional print has had the allure of a cadaver dog now that all the world’s skinny is but a Google away. But while newspapers have been the earliest victims of this splintering, they damn sure ain’t the last. So while they’ve been busy innovating, they’ve kept a close eye on their broadcast brethren, in hopes they’d be watching when the whims of a newly empowered audience finally kicked us square in our unnaturally white teeth. Who can blame them?

I can’t. In fact, the longer I work in television news, the more eager I am for it to change. And change it will, that much is indisputable. New species of data-gatherers are already roaming the globe: VJ’s, Embeds, Mojo’s, all highly-wired individuals capable of producing a less polished but more immediate product that’s readily digestible on a variety of platforms. The B&C article that’s gotten so much press delves into this schism, exposing how many TV stations have made only the clumsiestof lurches at scaling this newly uneven terrain. I implore you to read the whole thing, then check out the many conversations it has sparked on-line. Go ahead ... I’ll wait.

As for your above-average lenslinger, I am at once wildly excited and desperately pessimistic about the future of local TV news. With new tools at our disposal and more ways to share our work than ever before, this could be the eve of a badly-needed renaissance. Freed from the conventional wisdom of stagnating broadcasts and single-purpose production, those of us behind the lens could re-write the paradigm and forge a new kind of news story that had little to do with allotted time-slots and frothy correspondents. I got lots of friends on both sides of the glass, but if local TV news is going to survive, its got to keep up with the new generation of news consumers - none of whom give a damn what time your next newscasts start. Trouble is, we’re a stubborn lot. Despite those iPods on everyone’s desk, too many of us are quick to recall the good ole days, when three channels ruled the day and Chet McDimpleChin ushered in every breathless tidbit with a twinkle and a wink. Come to think of it, maybe change ain’t so bad...
Posted by Lenslinger at 10:48 PM 2 comments:

The Adventures of Camera Dad 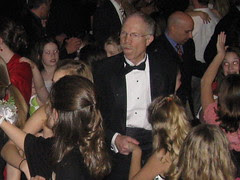 I was deep undercover when I spotted him. Chrome-dome, tailored tux, lip bit. Who was he? I didn‘t know and I didn’t care. But something about this utterly distinguished gentleman doing the twist with his seven year old held me spellbound. Perhaps it was because I was doing much the same. Actually I was thrown’ down a mean ‘robot’ as my youngest shrunk in horror, but that’s not important right now. What is important is I wasn’t in the moment. Instead of taking in my ten year old in all her splendor, my eyes were darting around the ballroom like a sniper on deadline. The insurance agent with the too-tight toupee, poppin’ and lockin’ by the punchbowl, that pharmaceutical salesman, the one digging in his thousand dollar suit for a business card as his six year old climbs up him, the shrieking pack of fifth graders trailing the cookie tray lady. All around me, men in black and little girls in ruffles attempted all manners of rhythm as the sound of Kelly Clarkson blasted every crevice of The Empire Room. How was your Friday night? 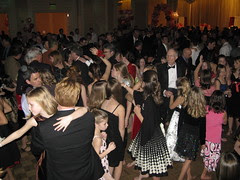 Mine was great - another Father-Daughter dance I’ll strive to describe to future descendants. But as much as I may have been lost in all that estrogen and reverie, another part of me remained clinically aware of my surroundings - eve as I whipped out that patch of cardboard and started to break-dance. It all became clear once my fifth grade ran off the dance floor screaming: I’m a photog. No matter how I disavow my field, years of conditioning have rendered me unable to not appreciate dramatic lighting, to not analyze ambient sound, to not survey faces for expressions suitable for framing. My youngest daughter safely drowning her shame in three kinds of chocolate chips, I was free to roam the great hall in search of prey. Fishing my digital camera out of a suit pocket, I scanned the room for Mr. Bit-Lip. Finding him in mid-Travolta, I moved across the room like a hitman until the disco ball light bouncing off his forehead momentarily blinded me. Wonder what tax attorneys think about on the weekends? 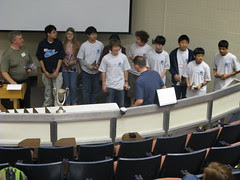 I wouldn’t know. Been doing this silly gig too long to know any other angle. I proved it again a day later, when not far from the scene of my dancehall shenanigans, I skulked along the edge of a college classroom, Canon PowerShot in hand. This time however I wasn’t tracking white man under-bite, I was hunting genius At least that’s how I’d describe the middle school kids taking part in Math Counts - some kind of Mathletic Event my oldest child looks forward to every year. If I weren’t so proud, I’d feel stupid. How else am I supposed to feel when they flash a paragraph of symbols I don’t even recognize on the overhead projector and before I finish deciphering the third squiggle, some kid in a free t-shirt yells out ’16907.4’ and high-fives his buddies before the judge can even tell him he’s correct. Damn! I’ll be working for that kid someday. Better get a picture… 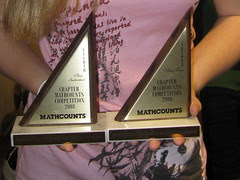 Trouble is, I don’t act like the other Dads. Whereas they loiter on the edge with handy-cams at parade rest, I palm my tiny lens and move toward the front like one of those scary church ladies who appear out of nowhere to catch those stricken with the spirit. Sometimes the tunnel-vision kick in and I forget where I am. Suitably southern and quite polite, I’m known to slam a Grandma into the boards should she wander into my shot. That kind of behavior I cannot endorse, but something just takes over my soul in the presence of a photo-op. Perhaps that explains my actions Saturday, when no sooner had my oldest daughter’s name been called than I bounded down the steps three at a time, lest I not be in place for the trophy shot. Oh rest assured I was there, but not before realizing the entire crowd was staring at the goateed loser clutching the handrail with one free buttock while he leaned w-a-y in over the stage and triggered a cavalcade of flashes. I knew then my quite refined oldest child would have a thing or two to say about Dad’s enthusiasm on the way home.

I just wish they hadn't called security.
Posted by Lenslinger at 5:59 PM 2 comments: