Anatomy of a Walkdown

As perp walks go, it’s pretty pedestrian. But this twenty second journey of an accused killer is worth reviewing anyway, if only because someone caught it on their fancy new phone. In it we see the backpedaling begin, a fugacious parade of shackles and glass that fed the opening moments of a half dozen newscasts. I wasn’t there, but have waited on enough Crown Vics to know what to do when what passes for Justice rushes up. So too do my cohorts, who set aside the small talk long enough to bag their prey - in this case a man accused of murdering his mother and setting her home ablaze. That's Top Story Strong and nothing would do for either of them to miss their mark. Still, nary an elbow set sail as an ad hoc welcome wagon surrounded the guest of dishonor. The competition ain't always that friendly, but in our analysis, the Lenslinger Institute finds no foul. Thus, the analysis that follows should be used only for entertainment purposes and not even linked without the express written permission of that sweaty executive I put on TV last week. Remember, no shrubberies were trampled in the making of this report. Names have NOT been changed to protect the indifferent. Please, no wagering...

:02 The footage begins with Weaver (in light blue) trailing the suspect closely, tossing out a question and getting a cryptic response. For Weave, the rest of the trek is but a cutaway. Meanwhile, Justin (in black and white) backpedals before the approaching trio like a man walking on marshmallows. Why you'd wanna walk on marshmallows, I haven't the foggiest.

:04 From screen left, lovely Caroline (in white) enters the field, sashaying across the lawn like she’s at a garden party. Do not be fooled. She’s a seasoned operator and can crunch scrum knuckles with the ugliest of us. As she swoops in, Weaver pries an eyelid off his screen long enough to notice an approaching pole. He dodges it.

:06 Justin too comes up for air, sees an ill-placed cement thingie and deftly slithers around it. His lens never leaves the mug of the man in the middle. At precisely the same time, a second shooter (in blue) appears, choosing a crossed ankle lope to smooth out the middle distance while working the far end of his full-sized lens.

:08 Corner fully rounded, the seven people proceed toward the Sheriff's department door, four squinting through lenses, two bearing arms and in one in a paper jumpsuit authorities made him put on after they found him naked near a swimming pool. You can’t make this stuff up. I’ve tried.

:10 The scrum congeals as the straightaway opens up. Weaver and Caroline fall into cadence on the arrestee's right. To his left Justin juggles his wriggling baby-cam. It is here lenslingers dare to zoom, darting in for a close up at the risk of eating an ill-placed phone pole. As for the man of the hour, he's entering 'the squeal zone'.

:12 "Why'd you set a house on fire" It's the only audio of note, a vexing question lobbed at a bloke well on his way to the pokey. He chose not to answer, keeping the details of his day to himself. But many times men in handcuffs do tell tales, so you'd better be rollin'. I've seen 'em confess on cam...

:14 No such luck this time. the suspect grooves on his shoes as he shuffles past on (mostly) his own power. No comment personified. Justin, Weave and Caroline trail alongside, lest he change his mind. Second shooter pans the passing parade. Nelson from the newspaper fires a closing shot.

:16 A squeal of feedback can be heard as the video freezes. I'd like to report that it was a passing spaceship dropping off Sasquatch for a press conference on Osama Bin Laden's whereabouts, but in reality the phone stopped recording once a call came in. It was a nightsider, wanting directions to the scene. Funny how news works.

...So, there you have it. Gratuitous perusal of found footage, the likes of which prove little more than I've logged too much time on my new Mac. If nothing else, perhaps you'll put some names to faces the NEXT time you're being frog-marched into a county-owned enclosure. Tell 'em Lenslinger sent ya...
Posted by Lenslinger at 9:18 PM 6 comments: 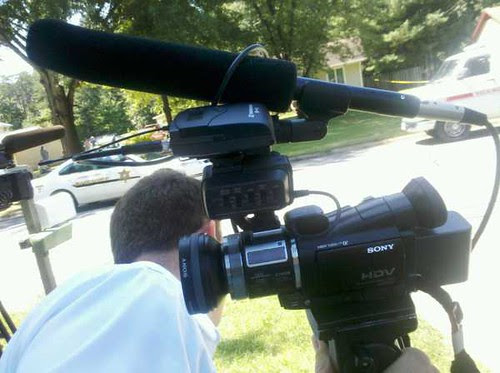 Once upon a crime scene, you knew what to expect when you glanced at the other guy’s gear. These days, not so much. Take this set-up, for example: a stack of plastic and glass so nonsensical Dr. Seuss might hide it in the live truck. Me, I’d strap that contraption to one sore forearm and wade into the fray, oversized logo lit by a lone tally light. So what if Rube Goldberg wouldn’t shoot his kid’s bar mitzvah with that rig? We got menus to cruise through! Besides, it ain’t the components you tote, it’s the moments you scope. And who knows, this plastic axe may be just what you need for that upcoming clown-car ride-along. Imagine the pride when you all pile out, knowing that A.) you’re rockin’ the very latest in news-gathering technology, or B.) those virgins down at Radio Shack have been playing Jenga in the back room again...
Posted by Lenslinger at 11:00 PM 3 comments:

Word to the Herd

Some folks only see their competitors on a spreadsheet. I run into mine at train derailments, cop car conventions and, of course, ribbon cuttings. Not surprisingly, the more mundane the assignment, the happier the chit-chat. Let’s face it: no one’s gonna skunk the other guy when you’re all lined up to talk to the Tomato Queen. Or even a well-meaning executive, for that matter. Thus, you’ll see many of the above formations outside pseudo-news events. Some call it teamwork, others collusion. I however know it by its proper name, an inelegant appellation to be sure, but one that’s oh so fitting: It’s a Gang-Bang. And while that term may offend your sensibilities, too late: We’ve been calling them that since before Andy Rooney swung his first wool-encased elbow.

Me, I like ‘em. You would too, if you spent much of your day squinting into a tube, slaving over a hot dashboard, or merely trying to dig that tripod foot out of your lower intestinal tract. While I have little desire to carry any young reporters through their seminal assignments, I’m always up for a cross-town camera cluster. The other guys and gals seem to agree - especially in this time of One Man Bands, Multi-Media Journalists and other Kitchen Sink Carriers who have either volunteered or been outright deceived into working alone. Why it’s a time to compare opinions of protocol, transfer valuable camera acumen or just spread the kind of vile gossip we newsies tend to live for. Come to think of it, who wouldn’t dig a little midday huddle, a chance encounter we all knew would happen when we first read the press release...

Just don’t think it’s always a love-fest. Au Contraire. TV cameras are, after all, Asshole Magnets and a few of those orifices have infiltrated our own seething ranks. Think YOU despise the guy on the Tee-Vee with the shellacked head and aura of entitlement? Try scrunching up next to him outside a Meth-Lab. Or how about that sports reporter who sleeps in his car? That IS a pickle slice stuck to his cheek. And while we’re on the subject, how about that local news shooter who thinks he’s the official scribe for the Photog Nation? Dude speaks in couplets! And when he’s not yammering on about the psychological ramifications of High-Def lenses on aging News Queens, he’s slinking away to pop off yet another photo of some utterly dull camera cluster --- What other profession can you skulk about a playground at dusk and still feel pretty good about yourself? Loiter outside a homeless shelter with your eyes held high? Part a sea of overdressed strangers while wearing a fishing vest? Name another gig that requires the skills of an assassin, the reflexes of a pilot and the nobility of a pizza delivery guy? Hold that thought, I gotta put some eyes on a sinkhole across town. Seems it swallowed a Prius full of female weight-lifters road trippin' on a vitamin binge. That’s the kind of video the good people of the Upper Midland Heart Zone count on me for. Besides, I didn’t repeatedly volunteer to thread the filmstrip projector in middle school for nothing. See...

I’m on a mission from God.

Okay, maybe not the thunderbolt-hurling, pox-applying, sunset-understanding GOD, but hopefully some middle management deity is reviewing my file, watching the good news I produce and the bad news I dodge and marking it all down some sort of cosmic photog ledger of sorts. I’m really not expecting total consciousness or anything but if I’m gonna be judged, base it on the number of feel-good stories I cranked out as compared to the death-obsessed dreck I had a hand in. Hey, we ALL fall short of the Glory, but if I’m going down (or up) over the kind of tripe I spread across the earthbound airwaves, I feel pretty good - for I’ve profiled (slightly) more dogs in funny hats than I have freshly shackled madmen, no easy feat considering the first four hundred stories I put On-Air began and ended with some sap in handcuffs.

Hey, it was the early Nineties. Arsenio Hall still had a show. There was a lot to be angry about.

Yeah, not counting all those times I slow-mowed video of Revered Ernest Angley walking in and out of Federal Court, I’m pretty good in the Karma Department. There’s only one thing that worries me. The Blog. I’ve been at this this for more than half a decade, spotlighting the plight of TV News Shooters for a small but rabid readership and though it’s humbling to admit, I’ve received some glowing letters over the years. We’re talking personal notes filled with uplift, the kind of divine e-mailed intervention that’s more than once elevated my mood just when it really needed it. But I’d be less than lying if I didn’t admit it troubles me on occasion, More often than not, it’s the rookies who write, they tell me they enjoy reading my screeds then offer up their own adventures. This never fails to please me, but in my inner moments I wonder will I pay for encouraging youngsters to pursue what may be the most intriguing dead-end job on the planet. Can I live with that, let alone live up to it when called on the cosmic carpet?

Lemme get back to you on that.

(Special Thanks to Jonathan Warren, whose above photo got my head spinnin'...)
Posted by Lenslinger at 7:42 PM No comments: