An Offer I Couldn't Refuse 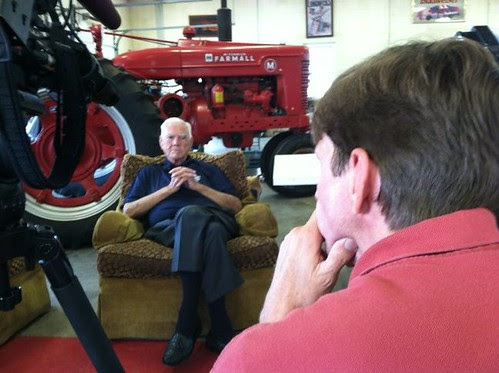 Despite being a heterosexual Southern male, I don't know a lot about NASCAR. Sure, they run big time races just down the road, but until they outfit those 'stock' cars with flamethrowers, I probably won't tune in. That said, I'm a huge booster of my home state, which is why even a Luddite like me happily got up early to go hang out with certified living legend Junior Johnson. Don't know Junior? Why, he's quite simply the embodiment of NASCAR's moon-shining roots, a man who tore up the back roads with a trunk full of hooch l-o-n-g before grown men appeared in public wearing day-glo jumpsuits. If that wasn't enough, dude owns North Carolina's only legal distillery! It's a fine establishment I've profiled a time or two and the product that pours out of that Madison tap will, as my late Father would say, "knock your dick in your watch-pocket".

Crass colloquialisms aside, I was the picture of sophistication as I drove into Johnson's 150 acre estate. Of course the property itself was the reason I'd come. After all, you don't put a six million dollar spread up for action without first having a bunch of news crews over to get the word out. Of those interlopers, I was crew number two. News 14's ever dapper Ed Scannell barely cocked an eyebrow as I barged into the foyer, a reaction not nearly as exciting as that rumble scene in 'Anchorman'. Still, it was all we could do circle each other warily before returning to our individual mission. That mission: videotape everything interesting in the rambling mansion before the place filled up with reporters, cameramen and (GULP!) newspaper people. Yes, even the Print ourists showed up for a forced march through one legend's living room. There, in the pantry, isn't that the lady who hurls morning forecasts every other weekend? She's not at all taller in person!

But enough about people I make uncomfortable with my baleful stare. Let's meet our host! While strangers rifled through his dream home, Sir Junior Johnson lounged in his race shop down the driveway. That's where fellow TV News survivor David Whisenant and I cornered the former race car driver. Seated in the shadow of his prized 1941 tractor, the eighty one year old was frail but friendly. Without a doubt, Junior Johnson has peered into more television cameras than I've yet to lift, which is why I plopped mine on its tripod and took a seat.  What followed was a breezy three way conversation between a man destined to be remembered and two schlubs who can't seem to remember why they got into this business to begin with. Oh wait, I know: it's because this silly gig allows to me to meet the occasional folk hero, not to mention a fellow journeyman like the good Mr. Whisenant.

You know, with all this talk of palaces toured, I'd really like to show you the result of my visit, but since my station didn't post the story, I'll have to show you David's version instead. 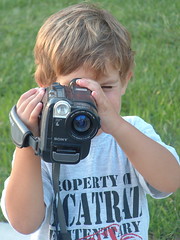 ...I learned with one eye shut. Seriously, I paid ZERO attention in high school and even less afterwards. In fact, it wasn't until I first fixated on that tiny screen at the end of the eyepiece that a few truths came into focus. Important stuff, too, like...


It's not enough for surgeons to save lives, they got to be the coolest guys in the (operating) room. Honestly, I've sat through enough procedures to spot extreme douche-baggery with or without a sterile mask. Theme music, frigid temperatures, dried ice: it's amazing the props some surgeons need to cut a fellow open. And talk about playing to the camera. I know reality show cast-offs with less of a lens fixation. I had one doctor get so excited at the presence of my glass, I thought he was gonna pantomime 'Sister Christian'. So the next time a nice hospital lady ask if the local TV station can videotape your bunion-ectomy, do yourself a favor and hobble away to the other end of the lobby.

If your first three story ideas fall apart upon impact, you are doomed to a day of fruitless phone tag. I don't care how many gold statues you bought and paid for, some days shit just doesn't come together. And there you sit, workin' the horn for all its worth while news managers bang into your cubicle like angry sharks. Of course that's the exact moment a press release touting incredible news lands in your in-box. You rejoice, flip off your least favorite producer, do an awkward victory dance and call the number on the press release - only to find out the PR flack just left for back surgery but will happy to help you once he's finally cut free from his body-cast.

The smaller the constituency, the grander the delusion. Let's face it, the guy within reach of the nuclear football is really quite reasonable. It's that dude on the local school board you gotta watch out for. Chances are, he's nuttier than a barrel of squirrel turds. At least that's MY finding after witnessing some of the nimrods who hold a gavel over our fine communities. Hey, you don't HAVE to be nuts to serve in city or county government, but it will sure will help when you and your esteemed colleagues are holding an entire town hostage over the color width of this year's parking tickets. Me, I'll be sitting by the door, one hand on my camera, the other cradling a can of mace. Don't think I won't use both of them.

No matter how many times you tell the desk that A) unicorns don't live under that overpass, B) there's no way a steaming pile of egg noodles can resemble Kurt Cobain, or C) you don't even remember HOW to square dance, understand this: All you really have to do is get in the news unit and GO. I'm not saying minotaurs will be waiting there to guide you through some house-cats fantasy, only that if chain-smoking gremlins are in fact taking over the city sewer system, they'll most likely come out and talk once they see you circle the block a few times...