(Indulge me, won't you? There are themes deeper than the evening news...)

When three weeks ago my older brother Richard called to tell me our biological father had passed, I told him quite honestly, I didn't think Dick Carney COULD die. After all, in his lifetime he'd been burned, shot, run over and chased away by many an angry woman. In recent years, he suffered heart attacks, a stroke, MRSA and enough bumps and bruises to put down an elephant. Not Dick. He could shake off a coronary emergency like it was a bad cold.

Or so we thought. 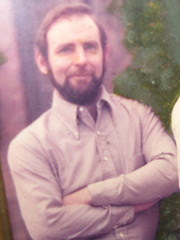 On January 30th, Dick endured routine shoulder surgery. Upon coming out of anesthesia, he mumbled a few words to his loving wife Kay, pushed himself up in bed and simply ceased to be. In an instant he was gone, exiting his two sons' lives as abruptly as he entered them. My brother Richard had it harder than me. A veteran paramedic, he was there, bedside, as doctors tried in vain to revive our father. In the coming days, Richard and I would talk more than we had in years.

But neither of us would come away with any real answers.

When I first met the man responsible for half my DNA, I was sixteen and angry. My Mother and he had divorced when I was but a baby and my brother barely six. Mom remarried a damn good man, who gladly gave us his name. Garlon Pittman took us in as his own and I love him dearly. But I grew up wondering about my biological father, as any child would. My mother never spoke badly of him, but his name was one you only dared whisper. He returned the favor by simply staying away. When Dick Carney finally did contact us, I wanted very much to hate him.

I didn't stand a chance. 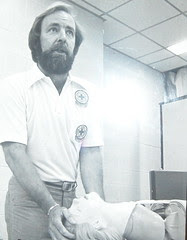 Over the years, Richard "Dick" Caswell Carney found many ways to make a living. He was a military policeman, a city cop and a private detective. He was an Emergency Medical Technician, a chronic blood donor and an enthusiastic first responder. Later he sold specialized tools to local farmers, convertible BMW's to pretty women and ice to Eskimos. In the mid 80's he owned a convenient store and put his scruffy youngest son to work behind the counter. One day, a beautiful blonde rolled up in a Honda Prelude and made that boy forget what color his socks were.

Dick Carney wasn't quite so lucky in love. After his first marriage failed, many others followed. Some I know about, some I don't. You could say he was a serial monogamist, though there's an ocean of ladies who would choose a harsher term. I guess that's their right. (Eventually, he mastered marital bliss with a good woman named Kay.) Me, I found myself forgiving this crown prince scoundrel a lot sooner than I had planned. He was, you see, one charming sonofabitch. Richard and I were not quite grown when we got to know him and in his furry face, we caught glimpses of the men we might become.

Having failed so spectacularly at early fatherhood, Dick nailed the second half.

It helped that his sons identified with him so. My brother and I are very different people, but much of what makes us "us" can be directly traced to you know who. Richard got the moving parts: the quiet confidence, the thirst for armament, the unquenchable desire to render assistance. To me, Dick Carney bequeathed his reticence, his reflection and his lust for language. Both of us inherited his humor and the ability to work a room.

So why am I telling YOU all this?

Simple. I miss the man. And with every day I wake up thinking of him, I worry that I'll forget one of his many facets. Besides, if you regularly read this blog, you too are in Dick Carney's debt. When long ago I dropped by his house to tell him I scored a job at the local CBS station, he put down his pool cue and handed me a coldbeer. I'd just quit a job making fairly good money selling cars for a minimum wage position at a backwaters affiliate. 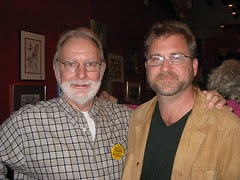 It was one of the smartest things I ever did and somehow he knew it long before I did. When fifteen years later I began writing about the job, he was the first to grasp what I was trying to do, for he seemed to have the blueprints to my psyche. So, yeah, I got a few 'Father and Sons' parables to tell and rest assured that eventually, I'll get to them all...

Now go hug YOUR Dad.
Posted by Lenslinger at 4:54 AM 9 comments: 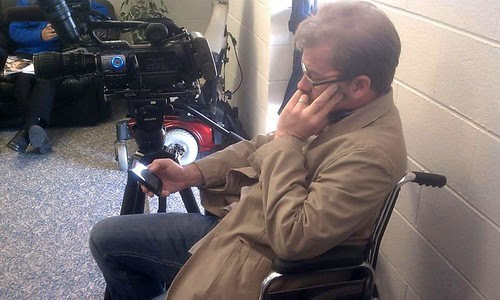 Note to Self: The next time a certain William Bottomley is hovering over you and giggling, get OUT of the wheelchair. To be fair, it was the only place to sit and since my story was forming at a glacial pace, sitting was more than called for. Speaking of calls, can anyone remember what we did before our every waking moment was spent fixated on a handheld screen? I have vague memories of driving around looking for phone booths, but from there it gets a little fuzzy. I do know that my first station-owned cellular device had a gasoline engine and giant, glowing green letters. Since then, I've sported an assortment of comm-links, from a briefcase size device bolted to the live truck floorboard to a late model Merlin hanging off my hip. Back then if you told me I'd be saddled with access to all the world's knowledge twenty four hours a day, I'd have asked you just what you smoked once Mork and Mindy went off.

Chances are you wouldn't have told me.

These days, of course, I'm equipped with a 3G device I neither pay for or could ever fathom living without. How could I? At any moment, I could be jettisoned into the void, hurled tripod over tea kettle at some cop car convention at the end of an unmarked road. What am I supposed to do, read a map? Yeah, right. I'd just as soon swing by the library and crack open a World Book. Maybe then I could figure out what mankind did before cyber-life... I'm pretty sure it has something to do with that Bill and Ted movie, though I don't trust any film featuring Keanu Reeves without an equal dose of ass-kickin Patrick Swayze. You heard me, nobody puts baby in a corner, headlock, wheelchair. Now, where was I? Oh yeah, waiting for today's story to end. I just hope it doesn't move too fast when it does...

I think my keester is asleep.
Posted by Lenslinger at 10:17 PM 3 comments: