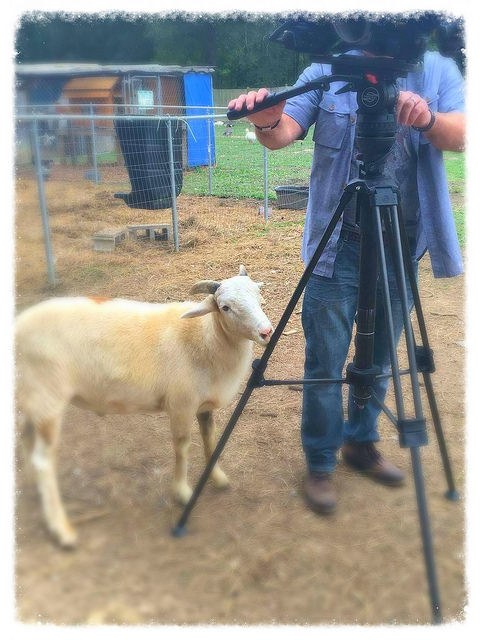 In his latest musical release, Lenslinger mines the plight of the lonesome data-gatherer against the angry jangle of the American dream. "Pixel Hood" tells the washed up story of a TV stevedore, a limping journeyman whose stilted visuals have left the landscape badly out of focus. Forced to schlep the earth with a broken Sony, the blogger turned troubadour finds damnation, scams and calamity in the guitar-laden gnarl of the photog songbook. But for all the pith and vinegar he pours forth, this only marginally skilled musician struggles with tone throughout what could have otherwise been a minor masterpiece.

The album's opener, 'Over and Under' opens with an angry scat about tangled TV cables, then shifts into what can only be described as 'Screamo-Zydeco' before settling into a whispery chant about fast food wrappers left in the live truck.

By far, the strongest track is 'Trailer Park Fire', a rollicking stomp through a thousand late night news scenes. With potent imagery and a plaintive wail, 'Slinger paints a searing portrait of what losers look like when they look at losers. Too bad he had to drench the whole thing in mid-80's synthesizers.

From there, 'Slinger careens from one genre to the next, often abandoning a particular style, form or even instrument before the song in question is halfway through. While the source material is strong, his insistence on open-mouthed throat drumming wears thin. Were it not for the versatility and verve of his backing band - a ragtag group of news shooters turned musicians known as 'The Hurricane Head-Nods' - their leader may have mangled the muse in the process.

The album ends with it's title track, 'Pixel Hood', an ambitious if unwise epic dirge about a delusional news shooter bent on revenge and too many Red Bulls. Before the nine minute song crescendos with enough rock-star bombast and rearview mirror moves to make Corey Feldman slink away in shame, it touches on such important topics as hunger, injustice and why Spandex is no longer an acceptable fashion choice for middle-aged men.


The whole thing's pretty much an ear-bleed, but compared to his debut CD, the pretentious, protracted and universally panned double live album "Wretch-A-Sketch", anything is an improvement. (Two Stars)
Posted by Lenslinger at 10:59 PM 11 comments: