Many stories from covering Hurricane Irene to come, but for now a quick video from Atlantic Beach, North Carolina...
Posted by Lenslinger at 2:20 PM 3 comments:

The Hulk and the Hurricane 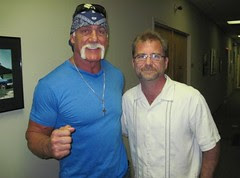 It's not every day you tell a grown man you loved him as Thunder Lips, but that's exactly what I said to Hulk Hogan when I ran into him at work on Wednesday. He told me was I was dating myself. I said that was okay around here. He half chuckled before ambling down the hall - gingerly, like a man who's taken a folding chair to the face. I was in suitable awe, but I couldn't linger too long on this deflated superhero. There was a bigger name on the other line. IRENE. Seems this salty wench is intent on crashing our Carolina shores and if that's going to happen I simply have to be there. Why? Hard to say. Voluntary deprivation is normally not my bag, but the pageantry attached to these marquee winds draws me in like a punch-drunk barfly. Too bad escorting a harlot onshore is such thoroughly miserable business, with little to no reward. In the end, there are only bragging rights, the ability to name-drop the latest storm at the very next keg party; it's the TV news equivalent of getting a new tattoo. All I know is for me, the only thing more unpleasant than chasing a hurricane is watching someone else do it. Thus, I'm hustling to the coast with electronics in tow and safety in mind. Friends are joining me. Dirty weather awaits. I'll try and keep the blog updated but things get hinky when trashcans take flight. So check my Twitter feed or Facebook. Get with.  Know that I'll be checking in... Courage! 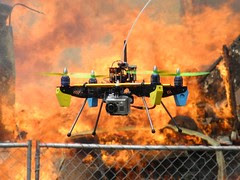 I have seen the FUTURE of news gathering! At least I caught a glimpse of it before it buzzed that burning house. First though, a disclaimer: Here at Viewfinder BLUES, we pride ourselves on remaining calm in the face of emerging technology. Too often, practitioners of our craft set aside better judgment in the rush to be perceived as early adopters. No sooner does a new tool or technique emerge than a certain type of news shooter declares his (or her) fanaticism, until every story the produce features a tilted swish-pan, extensive wide-angle lens use or every overwrought auteur's favorite device: the infamous dip to black. (Guilty! Guilty!! Guilty!!!) Thus, the founding faculty of the Lenslinger Institute vows never to go coo-coo for Cocoa Puffs when a sober endorsement will do. Having said that...

Sweet Lincoln's Mullet, THIS is the coolest thing to hit the news scene since the introduction of the wireless microphone cut workplace injuries in half! Officially, it's known First-Person-View or FPV. It's the latest craze among the RC Aviation crowd and no doubt has it's roots in the military. Basically, it's (one of those wonderful) GoPro camera strapped to a flying platform. But it's no mindless drone. Instead, an earthbound operator watches a real time feed through special goggles, enabling said joystick jockey to jam his flying eye into the very bunghole of calamity, all while feeding instant Hi-Def video back to its base and beyond. The possibilities of such a toy-like news gathering tool are endless! Okay, so one would last about five seconds in even a category 2 Hurricane and they probably wouldn't harvest much footage at that County Commissioner meeting, but imagine what you could do at a road-choking traffic accident or a spread-out ostrich farm or even some highly predictable controlled burn situation.

That's where the intelligent beings known as the Roswell Flight Test Crew broke out their tiny quadcopters and flew them through the plume of an abandoned apartment complex - a set of structures thoughtfully set ablaze by the Longview, California Fire Department. The results are staggering - even withOUT the pyrotechnics and driving metal soundtrack. The Roswell developers say it's still in the prototype stage, but whatever they fly it over next, it's sure to turn industry heads - provided it doesn't make an unceremonious splash. As for me, I'll be honing my (non-existent) joystick skills and reminding Mrs. Slinger how a GoPro camera would fit quite nicely in my Christmas stocking. For now, I'd like to hear YOUR suggestions for how this truly bad-ass hovercraft can enrich local newscasts. Just speak up, would ya? I'll be out back, practicing my swish-pans.