From Our Personnel Department... Must have firm grip, a pair of sniper's eyes and a knack for gadgets.

Oh, The Places You'll (be forced to) Go! 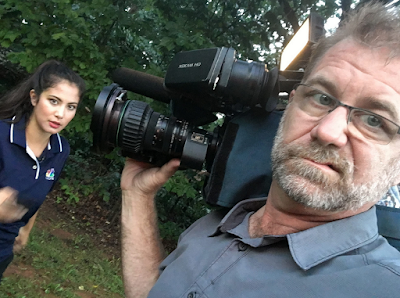 Congratulations! Today is your day! You're the photog on call! You’re off and away! There’s poo on the highway. And goo at the zoo. Stop by the station and grab a hair-do! Lex will be waiting. Or maybe take June. Just don’t go with Nigel. That dude’s a buffoon!

The scanner just burped! It horkled and hacked! We’re gonna need you two to come back! Pick up a live truck! Head straight out of town! An unpleasant something has just fallen down!

You can’t lag behind! But please do not speed! There’s no time for lunch! You’re now THE LEAD! Producers are juicing! A manager stammered! I’m pretty sure our sports guy is hammered!

We know you’re not there yet! And busy as hell. But we need to know just HOW this thing fell? Did something else push it? Did it just take a dive? Was it feeling depressed? All out of jive? Let us know when you get there. WE'LL DO IT LIVE!

You’ll round off the bottom. In a box off the top! We’ll come back after weather. And probably not stop! We’re still in the book. So try not to flop! Now put down that phone and know you’re the best. Whatever you do, wear that damn yellow vest! Tweet when you get there. We’ll flesh out the rest!

You’ll come to a place where the streets are not marked. We don’t really give a damn where you parked. Just get on that guardrail. The countdown’s begun. Fire up the camera. Set it on STUN. There’s no time to focus. You’re up on the bird. Stand by for grandeur…

Let’s polish this turd!
Posted by Lenslinger at 6:52 PM 3 comments:

They may smell like a bucket of wet gym socks, but I've found most college mascots to be pretty reasonable creatures. Sure, they're misunderstood. But how can you not be when you're a spherical fruit with stubby blue arms?  Where can a tiger with cereal issues go, without someone yelling "You're G-r-r-r-e-e-a-t! And who can blame a horse-headed playboy for pickin' up digits on the road? I can't! Which is why I jumped at the chance to speak with a number of them at an industry function the other day. Well, actually I was the only one speaking. Mascots are pretty quiet. In fact, they don't talk at all! Don't know why, really. Anyhoo, sitting there, listening to the minutes of the meeting not be read, I got to thinking...

Ya know, mascots and photogs aren't all that different. Both species sweat profusely, both suffer from poor peripheral vision and both know how to whip the natives into a frenzy with just the roll of a shoulder. Maybe that's why I always identified with these taciturn assassins - even Shadow Satan over there. Normally, I try to avoid fallen angels, but I gotta say, for an agent of the underworld, he's good people. I just wish he'd share some sordid road stories with me, but all he ever did is stare. Then he pantomimed my execution, much to the pleasure of the cleaning crew. Once I even asked a cheerleader WHY these creatures are so quiet all the time. She only shrugged and said the mascots didn't like to talk about it.

I guess I should have seen that coming.
Posted by Lenslinger at 5:18 PM No comments:

An Important Message To Families...

Does your young teenager think camera crews are cool? Does he only stop fondling the remote control when the local news is on? Does she hold her phone strangely sideways when snapping a selfie? WE CAN HELP. What seems like a passing interest in TV News can lead them down a road filled with potholes, potholes that your son or daughter will be expected to stop and put on television. That’s no life for anybody. Which is why we here at the Lenslinger Institute have established a unusual youth intervention program to discourage kids from even considering what was once the world’s most interesting dead-end job.

We blow up your kid’s phone at 3 AM, tell ‘em there’s a circus train derailment on the edge of town and we need their help. They’ll be excited at first, but that feeling will fade once our crack team of washed-up photogs arrive and throw them into the back of our very own live truck (the one with the blacked out windows!). From there we run your son/daughter through a gauntlet of real world news gathering scenarios, from the soul-draining tedium of a simulated city council meeting to virtual hurricane immersion! The shift is long but it usually ends with the kind of panic attack that will send your little hipster running straight for the nearest Coast Guard recruiter. Hey, look who’s making America great again!

Our rough but loving crew of photog-expats and rogue sound recordists are determined to make sure your little buttercup doesn’t make the same mistakes they did. Which is why we have no problem abandoning them in a Wal-Mart parking lot until they can score fresh sound on the Battle of Gallipoli. Truth is most of our staff emotionally shattered, if not estranged from their families. But that’s not important right now! What IS important is that your child understands there’s no simply future in covering yesterday’s news. So don’t get all weirded out if they come home talking about being strapped to a wobbly stepladder and handed a red-hot handycam. I can personally assure you that the Waffle House sausage grease we spray on them during the plebe period IS 100% Gluten-free.

Sure, our tactics are a bit unconventional, but we guarantee your snowflake won’t be pass a local news car in traffic without getting the vapors. They’ll thank you later. And considering they’re gonna be the ones picking out your rest home, it pays to maximum their income potential NOW. Ya know, studies show that every time a young adult pursues a career in TV News, a future venture capitalist dies. Our country can’t withstand that. So do what’s right and cough up the seven payments of $49.99! The sooner you do, the sooner we can frog-march your little smart-ass through the longest workday of their young lives. They’ll come back with a weird eye twitch and a major better attitude. Most importantly, you’ll rest easy knowing your children’s future is a little bit brighter - and for far less cash than even a decent reform school…

Speaking of which, did we mention the extra charge for the souvenir video?
Posted by Lenslinger at 2:12 PM No comments: