Gunnin' round the Mountain 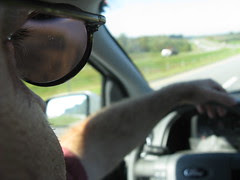 With Sarah Palin and supplicants high-fiving one another at nearby Elon University, I was lucky enough to be pointed in the opposite direction. But freedom from America's hockey mom doesn't come without a price. No, to earn my reprieve, I had to once again pull off the improbable: I had to haul ass to the mountains. And back. Along the way, I was to shoot video of the eye-popping foliage, interview as many leafers as possible and have it all put together by the 6 o'clock news. What's that? You have no pity for a schlub like me - whose only job is to drive uphill, take some purty pictures and put 'em on the Tee-Vee? I hear ya - but before you christen me some kind of camera packing slacker, let's do the math: 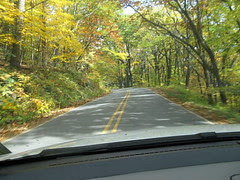 The distance from El Ocho's news conference room to the Blue Ridge Parkway is - eh, 101 miles. That's not unheard of in the way of news sorties, but bear in mind every bit of it is uphill. Since it took me until 10 AM to convince the suits to let me go, I didn't arrive in theater until well after 11:30. At that point, the real driving began. See, the Parkway is a meandering two lane road that tattoos the spine of the Blue Ridge Mountains. Pockmarked with overlooks that offer debilitating views, it is best suited for rich guys in Harleys and elderly couples in motorcoaches - not hopped-up photogs with deadlines ridin' shotgun. Tell me - you ever snaked your way past a bus full of Shriners on a lonely mountain pass - only to have them throw club signs at you when they roar past your tripod a few miles later. I have and it shocks me the kind of sign-language those people use. 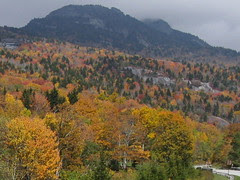 But it takes more than an angry guy in a fez to throw my focus. No - to really screw things up - you need road closures. Which is exactly what threw me for a detour soon after I headed South on America's Favorite Drive. Before I knew it, orange signs directed me off the scenic ridge an into rush hour traffic in Boone. That's okay if you're trawling for hippies, but I had a mission to complete and this circuitous route cost me plenty. When I did get back on the Parkway, the damn thing was clogged with Grandmas of every denomination. Running out of options, I tried to drive nice - but that one old bag had it coming and hey, unit 4 is unmarked. A half dozen terrified geriatrics later, I stared up at Grandfather's Mountain and realized it was time to turn around. When I arrived back at El Ocho, it was 4:30 in the afternoon and station promos were already touting the footage I'd yet to even look at. When everything aired as advertised ninety minutes later, no one was more surprised than I.

Except, of course, Sarah Palin. I'm told she was crushed I didn't show.
Posted by Lenslinger at 9:50 PM 8 comments:

No Soundbites for You! 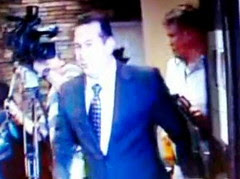 While I've never been ejected from a presser, I've damn sure fantasized about it. Truth is, I'd rather pass a Rubik's Cube than attend one more semi-circled summit, for it seldom makes for acceptable television. That's why TV news crews shift from foot to foot as newspaper reporters (remember those?) scribbles podium quotes into their skinny notebooks. That may cut it in Inkville, but in Television we need first-person, one-on-one interviews, preferably with a 3-D logo spinning in the corner. So...we wait until the dogs and ponies have been packed away, lead the speaker away from the glowing picture window the PR flack insisted he stand in front of, and ask the CEO slash Sheriff slash American Idol judge just what they meant when they recited that stuff from the press release. Like I said, it rarely illicits a gripping response, but it's better than the swill they foist upon the ink stained set from the safety of their lectern.

I'm reminded of one press conference from a few years back - that turned out not to be a presser at all. The details are sketchy, but I remember a reporter and I being dispatched with the utmost haste to a press conference already in progress. Seems the good folk down at the County School Bus office had a few things they wanted to share about some of their driver's records. Juicy stuff for a Tuesday morning, even if my on-air partner and I had no idea what precipitated the school bus office's newfound transparency. By the time we arrived we still didn't know, but upon dragging our gear into the small conference room, we sensed something was not as it should be. Lights. Way too many of them for a midday press conference, all shining on two separate camera crews from the same competing station. At the center of all that light, a PR lady sat frozen in fear as Channel X's investigate reporter thrust documents in her face. This was no press conference - this was a sting! No doubt the culmination of a month long investigation, Channel X was going in for the kill and somehow el Ocho caught wind. Check Please!

After a few minutes of eyelid morse-code, my reporter and I determined we were, in effect, crashing a deposition. To their credit the 'X On Your Side' crew(s) barely looked up, but from the amount of scrim they'd used on their keylight and the way the potted ferns were so expertly placed over the victim, er - PR lady's left shoulder, we felt like we'd bum-rushed a distant relative's kid's intervention. AWK-ward! After jotting down a few notes, my reporter and I did the only honorable thing we could do: we slunk out of there like the greedy vermin we were. Oddly enough the suits didn't make us turn that story that day, though someone a few tax brackets above me started making phone calls to the school bus office on behalf of El Ocho. As for me, I watched Channel X that night, learned some really skeevy things about certain bus drivers and breathed a sigh of relief when I saw no signs of myself coming, gawking or going...

I just feel bad about all those shadow puppets.
Posted by Lenslinger at 8:30 PM No comments: 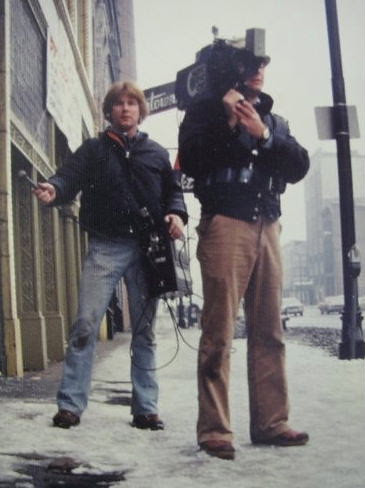 ABC, 1978 (Pilot Episode) In this short-lived Starsky & Hutch spin-off, "Berger and The Bus" cruise the means streets of Kentuckiana in search of deadlines, breakers and a couple of those new Members Only jackets. While S&H featured the 'Striped Tomato' Ford Torino, this primetime hopeful revolved around the RCA TK-76 handheld color camera and the duo's thwarted efforts to score chicks with it. Producers initially had high hopes for the series, but quickly pulled the plug when The Incredible Hulk's strong debut instantly dominated key nerd demographics. The series' only surviving episode is known for heavy polyester product placement, unsuccessful catchphrase attempts ("Are we Rollin'?") and it's Electric Light Orchestra soundtrack. Now popular on college campuses, fraternity brothers trade jello shots each time the soundman character runs his fingers through his perfectly feathered hair. Starring real life Lousiville newsies Jim Berger and David R. Busse, with a special cameo by Antonio 'Huggy Bear' Fargas. *** (3 stars)
Posted by Lenslinger at 8:35 PM 2 comments: 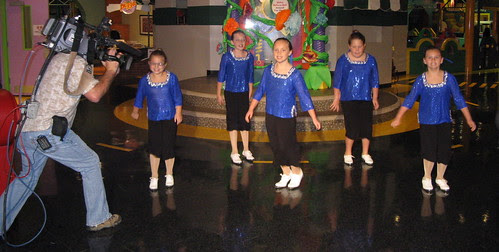 Once upon a time I worked the antemeridian quadrant, processing more froth and atrocity before breakfast than most people did all day. Head-on collisions and toenail conventions, charity auctions and horrible arsons, luxury boat shows and bloated floaters; I pointed a live lens at 'em all for a four hour morning show that never seemed to end. But that was many moons ago, long before I proved to the suits how cogent I can be after the sun comes up. These days I avoid those bleary-eyed live shots like airport bathroom stalls - and not just because of I take such a wide stance. See, I'd rather race after deadlines than stand under a Sony. Throw in the techical acumen of a stoned shepherd and you got more than a few reasons why I deny my pre-dawn qualifications (except when under oath). Still, I'm not in total control of my day and with our regular early-bird photog at home building his ark, it's inevitable I get tapped to fill the time between the empty-headed anchor babble and the orange barrel update.

All of which goes to explain why I was hunched over a mob of hopped-up cloggers while you were still wandering around the house in your boxer shorts this morning. By the way, ever listened to Cotton Eyed Joe twenty-three times before your first cup of coffee? That'll put pep in yer step - which you'll need once the fiddle solo fades and you find yourself slogging down the shoulder of some country road as a trailer bakes in the distance. That's exactly where I ended up a mere ninety minutes after the above snapshot was captured. No sooner had I bid my high-stepping friends a bitter adieu than my cell phone began dancing a jig of its own. Eight miles later I paused there in the high grass as a deputy with a big pistol and a small man complex insisted I go no further. He consulted the walkie-talkie on his shoulder; I threw up my sticks. Through the viewfinder I watched as paramedics wrestled a soot-faced woman onto a gurney. She didn't want to go and I didn't want to be there...

Just like old times.
Posted by Lenslinger at 7:14 PM 2 comments: 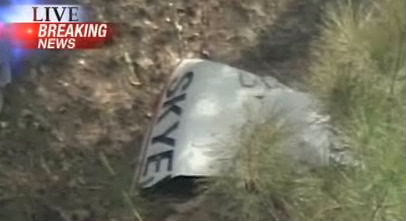 It's the kind of breaking news no TV station wants to produce. But KTRK's live coverage 0f their own chopper's crash is sobering, potent and necessary. Condolences go to the families of pilot John Downhower and photographer Dave Garrett, the two men killed today when SkyEye 13 went down five miles short of the story they were after. More to follow...
Posted by Lenslinger at 3:57 PM No comments: