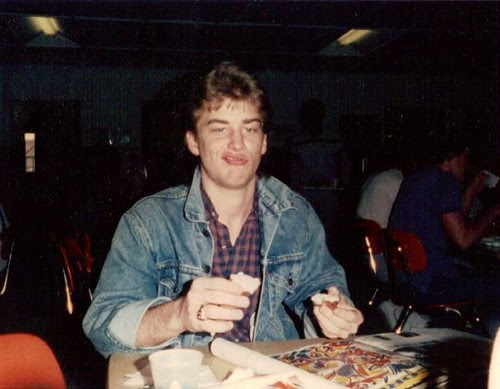 I'm on a badly needed Spring Break. While I recover, enjoy this recently unearthed high school photo of a young lenslinger, courtesy of a friend's upload. Make your own joke. Be back soon...
Posted by Lenslinger at 8:35 AM 1 comment: 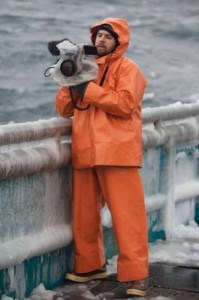 As a lover of the Discovery Channel, there is much to admire about The Deadliest Catch. For example, I like how the show has made heroes of smelly, working-class Joes. I also like how so many of the crew members smoke incessantly, knowing full well lung cancer is the least of their immediate health concerns. I like the way sea-spray looks in high-definition. I love the fact that Sig Hansen is now something of a celebrity (Here he is hobnobbing with Sir Paul McCartney!) More than anything, I love the way producers have crafted a compelling 'reality show' that doesn't involve confession rooms, dance numbers or multi-colored buffs. But for everything that I adore about this venerable hit, there is one thing I despise: the idea of slingin' a lens on either of those wretched vessels. Don't get me wrong, scoring a crew hat from the Cornelia Marie would earn me a lifetime of love at the nearest pub, but I'd still rather shoot a colostomy bag insertion than grace the deck of a paid fishing boat.

And it ain't that I'm skeered! I'm domesticated!! Fancycams are fun - even the tiny ones wrapped in plastic. I'm not sure I wanna sling one for 18 hours a day on the Bering Sea. I was in the Nav, remember? I know better than most landlubbers that Mother Ocean will gladly suck you into her briny embrace - whether you're trying to shoot a reality show, attempting to evade the crosshairs of a Navy Seal or just minding your own business at the scene of a hurricane. No Sir, I'm not this guy! But I'm glad brave young souls like him exist, for how else could I entertain myself when there's nothing to stare at on the internets? Don't bother answering, just know that at age 42, I fully grasp where I belong and it's not dodging some fisherman's wrath out there in The Drink. Right now, I much prefer my sofa - where the most hazardous thing I can do is sit on my oldest daughter's iPod and blame it on her little sister. Yes Sir, sibling insurrections I can handle. Rogue crab pots to the face? Not so much.
Posted by Lenslinger at 9:50 PM 3 comments: 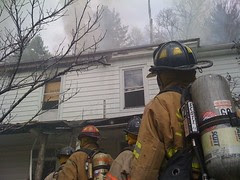 Sure, you might watch a lot of news - but until they perfect Smell-O-Vision, you'll never know the aroma of your average broadcast. Then again, why would you want to? Just ask any reporter who's been embedded with a ripe photog and they'll tell you: some fragrances are better left unsavored. It ain't that we stink. Well, most days we don't. Hey, you chase a cadaver dog through a homeless camp in the month of July ... see if YOU don't start losing friends. I mean, it's not like we're construction workers! No doubt those cats work even harder than your local TV stevedore, but at least they're relegated to hard-hat zones all day. We lenslingers have to intermingle with the delicate set. Businessmen in thin black socks, overly-perfumed reporter chicks, University elders with their own trademark scents... it's tough to carve soundbites out of thin air when the guy behind the camera smells like he lunched in a dumpster.

But like that green cloud I picked up at the county landfill, I'm getting ahead of myself. With the Photog Equinox still weeks away and Swamp-Ass Season just beyond it, there's really no reason for any interloper to melt the plastic off his dashboard with an indefensible whiff. So, HIT THE SHOWERS! But when you're done, have a splash of what and ex El Ocho photojournalist and gifted Twitterer 'Joey Flash' describes as...

...The cologne of news: structure fire smoke and motor oil are the top notes, with accents of sweat and whopper jr. Sexy as hell...

Sexy, yes - in much the same way a hand-me-down news unit with a third-generation funk is sexy. In fact, allow me to round out the bouquet: Eau De Photog would build upon your basic smoke plume, as would it feature the metallic tang of a live truck generator belching exhaust across the inner city. Add a trace of reporter hair spray, toss in the dollar menu item of your choice along with a vial of day-old bile and you have a pretty good idea what that bloodmobile slash manhunt slash circus clown orgy smelled like the other day. If that's not enough, put on this rain slicker and lean in realcloselike to your set... A buddy of mine wants to tell you about his walking tour to the penitentiary and luckily for you, he sweats in HI-DEF!