Welcome to the Chunder Dome... 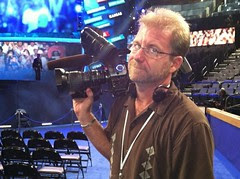 Okay, so no one threw peanuts at me, but a certain deity DID hurl thunderbolts, rain pellets and brain-baking heat rays my way. Frankly, I would have preferred a few Planters upside the head. But when you're slogging through the ass-hat factory that is any political projectile. Or your next meal, for that matter. Want proof? Eighteen hours ago, I ate a cold burrito delivered by armpit. Washed it down with eleven ounces of rainwater I collected in an old Fanta can I found in the live truck. Yup, life gets pretty raw on the campaign trail ... What's that? You've SEEN convention coverage? The bright lights? The swelling soundtracks? The polished pundits? All looked pretty posh, eh? WRONG! Covering a convention is like surviving a plane crash in the Andes. You'll come out of it okay, but only after trekking overland, infiltrating a village and noshing on a few colleagues along the way. I'm sure the network vet sipping lattes in some distant skybox might disagree, but here at the local level, it's every cameraman for himself. Just ask the yak who kept yelling my name at the exact moment Secret Service agents were waving wands over me. Good to see ya, Ken Devanney, but there's a beefy guy in a windbreaker trying to radiate my junk! Perhaps we could chat later....

Speaking of which, you ever loiter under a street light in a sketchy part of town while an exhausted coworker flags down a cab, all so the two of you can meet another tapped-out TV geek for a few overpriced Jack and Cokes? Me neither, as far as YOU know. What little downtime I had was spent in quiet reflection; sparse moments in which I pondered the cosmos and my place in it. After some time, I've come to realize a few truths:

Political conventions are hollow as hell. Yes, the Time Warner arena is stuffed to the gills with supplicants, but the rhetoric is so freeze-dried only the true believers get hot and bothered. I been to Mary Kay parties that had more soul. And before you go thinking I'm a Republican spy, know this: I'm a photog - a journalist, too. I've stared deep into the eyes of both parties' faithful, smelled the rubber chicken they just had for lunch and held my breath as they extolled the virtues of their chosen one, while intimating the opponent keeps dead baby livers in their glove box. I'm all for watching Democracy in action, but you people in the Barbershop quarter hats scare the crap out of me - no matter what buttons your cardboard fedora sports. Got it? Good. Now that we have that out of the way, we can get to important matters, like how the streets of Charlotte look like the last fifteen minutes of The Blues Brothers. Or how the protestors followed the Occupy model, each and every one of them raging against their own individual machine. I SWEAR, I saw a guy protesting potted meat at the corner of 7th and College yesterday, though from the smell of it, the only thing he truly boycotts is a working shower stall.

Cheap shot? Perhaps, but when you're suffering from sleep deprivation, a compacted skeleton and one righteous case of post-burrito turmoil, you take them when you see them. Next time, we'll explain how I ended up in the Charlotte Observer, popped up on Laura Ingraham's Facebook page and fist-bumped a stranger who told me either he 'loved the blog' or to 'get out of the shot'.

I couldn't really hear him.