Schmuck Alert: Hacked off in Sac-Town

Don't you just hate it when Mr. Clean falls in a vat of warmed-over butter-bean juice and chases you around the inner city? I do, but, hey, when you drag a TV camera around with you, you're bound to run into the occasional cartoon. Take Sacramento (please!). Temperatures there topped a whopping ninety degrees the other day and news crews fanned out to hype the climate. All went swimmingly at first. People jumped into pools, others sweated on cue and somewhere a giant thermometer was being fished out of a distant prop closet. Then it happened. A rogue ray of sunlight upped and melted one dude's brain. How else do you explain the actions of one Mr. Kermit Shirt, who took such umbrage at being filmed that he ditched a perfectly good bumbershoot and went to swingin' his attache case. Careful, fella! There's three decent issues of Boy's Life magazine and a half-opened juice box in there!

Now I don't know what triggered this particular Schmuckaleptic fit. Perhaps it was the heat. After all, ninety degrees IS almost hot! Or maybe Kermie there just didn't want to be photographed cowering under an umbrella in broad daylight. I can't really blame him, but that's no reason to go all clerical on an innocent news shooter. I only wish the reporter lady had better explained what set this guy off, for sometimes random buffoonery isn't enough. We need context, background, analysis. Hell, they didn't even include the part where Mr. Greenjeans took of with the photog's tripod! Un-cool. That report was already in danger of collapsing under the weight if its own cliches. Finishing it without sticks was downright dangerous, as someone could have got hurt. Luckily, everybody survived and while I may take issue with proper equipment usage, their really is only one tool up there and he's wearing an ugly green shirt. In fact we have a technical term for worms like him...

Schmuck!
Posted by Lenslinger at 6:21 AM No comments: 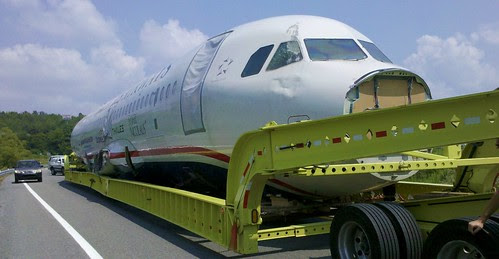 Ever chased a famous airplane up a mountain? I hadn't - until Thursday. It began the night before, when the suits of El Ocho learned the very aircraft Sully Sullenberger parked in the Hudson River was going to clip our coverage area and turned to the one photog they could count on they saw first: ME.  Suddenly I was hunched over Google Earth with an early morning mission in mind: Intercept Flight 1549 as it soared down the interstate. When and where was up to me, though the house-cats had suggestions. I glanced at the lack of details and grimaced. ‘Couldn’t I just shoot a gardening segment instead?’ I though about asking. It’s not that I’m skeered, or even lazy. I’m just pacing myself! Stand in the way of current events as long as I have and you learn to duck once in a while. I got enough misadventure coming my way, I don’t need to volunteer for extra headaches. Besides, this little mission wasn’t without its blank spots. I could pull my best Daniel Boone and still only bag a few seconds of video. So I did what any professional news photog would do: I promptly forgot about it and drove straight home. The next morning I rose early, poured a pot of coffee down my throat and dragged my ass uphill. Ducking into a drive-thru, I choked a spicy chicken biscuit and as the heartburn hit me, I wondered if the same feeling hit Sully felt when that flock of birds flew his way.

Then again, the hero pilot was nowhere near the plane that made him famous as it cruised through Virginia at an altitude of about three feet. The big bird was on its way to the Carolinas Aviation Museum, where generations of school kids would marvel at history's largest flotation device. As the convoy of support vehicles surrounding the newest national treasure wound Southward, I hauled glass up Interstate 77. Once I got to the Virginia State line, the terrain steepened and I made my way to a place called Fancy Gap. Once there I began profiling overpasses at sixty miles a clip. All the while the Droid my lap chirped and burped with messages from my station, as well as a student from the NC School of the Arts named Aaron, who was riding with the airplane and answering my every, oh, third text. According to Aaron, the miracle airplane was under an hour away, giving me just enough time to get high. See, I needed an overlook a scenic perch where I might catch more than a glimpse of the passing airbus. I settled for one on the Blue Ridge Parkway but soon realized the woodchuck beside me wasn't gonna cough up any good soundbites no matter how l phrased the question.

I didn’t travel far, however. Backing down the exit ramp, I headed for a rather countrified convenience store I’d passed earlier. The gravel parking lot assured me I’d find proper counsel inside, as did the Earnhardt cut-out in the dirty window. Inside, the clerk was busy, but that was okay. I came for the wing-man. You know, that loitering yokel who chats up the counter help between gulps of Funyuns and Mountain Dew. Those cats are leaning vessels of local lore, keepers of swamp holler secrets and perhaps a little creepy up close. No bother. I'm a fully grown cameraman in a marked news car. I can break a deadbeat Dad with implications of consent. Some jacked up gadfly will quickly do my bidding, even if I have to explain repeatedly what gadfly means. This time however, I was double lucky, for Funyuns was familiar with nearby bridges and only slightly derisive of my mission. ‘Ain’t gon’ find nobody waitin’ for that airplane.  Too damn hot!’ I agreed it was indeed sultry and repeated the directions back to him. Three miles later I pulled up to the overpass the wingman said would be there. It was.  Feeling a bit defeated, I dragged my gear to the edge, certain I wouldn’t get much more than six seconds of passing payload.

Then my Droid caught fire.

Okay so it didn’t erupt in flames, but by the way it began to dance and hum I  was expecting it to go full-on Pentecostal. It did not, but when it spit it out a message saying the famous airplane would have to detour around a busy underpass a few miles up the interstate, I nearly grabbed a snake and started swinging it. Instead I humped my gear back to the car and hauled ass to Hillsville, where to my chagrin actual people were gathering to witness the rolling exhibit. Seems they knew it was coming through and hell, everyone ‘round here knows real big loads always come off the highway and get hung up at the stoplights. I was told this from my new best friends, a rugged scrum of pension collectors and assorted looky-loo’s who treated the news’ guy’s arrival at the roadside post as nothing short of coronation. Suddenly, I was a king, sticking my lens into rural faces and collecting quotes on the impending pass of that big-city aeroplane. When finally the damn thing drove into view, I heard someone yell, “Thar she blows!”  rolled my eyes then realized...

The voice was mine.

The next few minutes passed quickly, though I took it all in slow-motion style. During the eighty seconds that the heavily festooned fuselage rolled in and out of sight, I bagged four wide shots, three medium perspectives and five tight frames of the plane blowing through. I smiled knowing how well they’d fit with the cutaway shots I’d already taken of people staring into the distance, fiddling with their camera phones and generally looking pensive. With the rolling aircraft now plainly out of view, I stuck a small microphone on a twelve year old and collected the best perspective on the spectacle yet. Minutes later, I rocketed Southward, even managing to slip by the airplane and it’s lane-hogging convoy. I was hungry, sweating and perhaps exceeding the speed limit. But an empty bureau awaited in the city of Winston and I was due there soon to write a script for a night-side reporter who was probably still in the shower. As I passed back into North Carolina, I noticed my competitors live trucks parked at the rest stop. Realizing I could have loitered with them at the state line and gotten the same footage footage as they did, I shrugged and pressed the accelerator to the floor...

You can have that kind of fun putting together gardening segments.