"Its funny how cameramen are such a scruffy set. They spend all their time at the biggest functions in the world, yet they manage to look like tramps. ... Its no use use wearing good clothes anyway – they don’t last five minutes. You clean your lenses with your tie, and lie down on the ground to take an angle shot; you tear your trousers as you climb through a fence. No, a cameraman is better off scruffy."

And so it was written in 1947, laying down a legacy of leisure-wear modeled by sloppy photogs the world over. That's right, cabana fans, we're here to talk about what you're wearing. Me, I got no problem with it. Then again, I got more Hawaiian shirts and cargo shirts hanging in my closet than every other Dad in the cul-de-sac combined. They more than make up for it with their fancy cars and holidays off, but do they know the rush of waltzing into a stuffy Republican fundraiser dressed like they're fresh off a fly-fishing trip? Have they ever rolled up on a train-wreck wearing actual hobo-clothes? Can they fathom what it's like to ask a world leader a question while rockin' darkened armpit circles and hiking boots? Highly. Unlikely.

If they did, they'd stop giving us photogs the stink-eye, for then they'd realize half the fun of being an assignment roadie is dressing like one. Until then, count on the gentler set to continue judging you at a dozen paces. Sure, they'll stop to kiss your glass when it's to their advantage but otherwise that rather gamey concert T will only ruffle their designer feathers. I ain't sayin' that it's right; only that it IS. Ever since the first horn-rimmed engineers erected the first empty tube, those of us tasked with filling it with pictures have focused far more on what we see than how we look. Our on-air cohorts know it's true. More than one reporter has raised a sculpted eyebrow over how their shooter chose to cover himself that day. We as a breed tend to shrug it off, but now a new animal is threatening to unravel our sartorial gnarl... 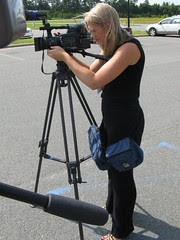 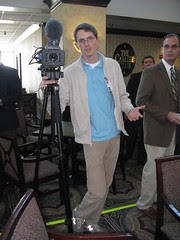 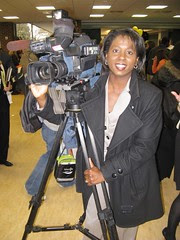 Vee-Jays. Multi-mediums. Ratpack Journalists. Whatever you call them, these crews of one are popping up everywhere and it's a safe bet they look better than you. Hell, I know one statuesque 'slinger who could find steady work modeling for one of those aircraft nose art calendars. Technically, that's a sexist statement - but what did you expect from a guy sporting a Cannonball Run press-on decal where most folk park a polo player...decorum? Perhaps, but I for one can't help but notice how the new breed of newsgatherer eschews the look of old and aims for something a bit more respectable. Chalk it up to those tiny cameras they sport - or the fact that so many of them double as their own on-camera talent. That's a tough gig and if you can pull it off in something other than lumberjack clothes, well - my non-ironic trucker hat's off to ya. Now if you don't mind I gotta gubernatorial debate to attend....

Anybody seen my serial killer pants?
Posted by Lenslinger at 7:51 PM 3 comments:

Shakes on a Plane

Whereas I spent the day locked in a box watching stagnant water, The Mighty Weave took to the heavens. That bastard. Actually, I can't blame the guy. He was nothing but hunched over his newsroom computer the other day when The Assignment Guy laid the high-flying gig at his feet. I know; I watched the whole transaction from a cubicle away, barely suppressing the urge to scale the partition and the both of them with my Leatherman. I would have done it too, but my Leatherman was in the car and at the time I was writing under deadline. Besides, Weaver's probably the better choice join professional news lady Cindy farmer as she did loop-the-loops over Winston-Salem.

See, dude's a bit of an astronaut. We both came of age outside the same Air Force town, but I was never able to recite the specs of every swooping war-bird quite the way Chris did. When the two of us (separately) took up the lens years later, we worked our respective fancycams for entree into many a cockpit. Me, I favored hot air balloons, homegrown helicopters and a near hallucinogenic ride aboard the Goodyear Blimp. Weaver liked to go fast, strapped in, upside down if you let him. I suspect he's hoping he'll get to take over the controls himself one day - but only if he could figure out a way to capture the whole death-defying ordeal from every possible camera angle. He is a photog, after all.

But there's another reason Weaver's got the upper hand, one I don't broach easily. Flying - height in general, really - scares the shit out of me. What can I say, I got a fertile imagination and a vocabulary to match it. I've never let my mild phobia stop me from crawling aboard whatever aircraft that would take me. I've even jumped out of a semi-perfectly good plane, parachuting to the Earth while sporting a mullet straight out of 'Roadhouse'. If that doesn't take grapes, I don't know what does - even if I did freeze up a dozen years later after stumbling out of a Las Vegas elevator and onto the top floor of the Stratosphere. I still say that had more to do with blood alcohol content and sleep deprivation, but I understand if the likes of Portier weigh in to differ. 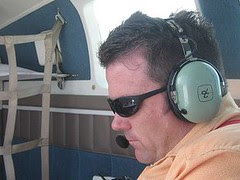 It's inconvenient, really. People - pilots included - assume the cameraman who shows up for the airplane ride to be pretty stoic. Usually I pull it off, though there have been a handful of times where I made deals with any deity listening while scrunched down in the co-pilot's seat: Get me down and I won't get back up. But I tell you is this: Despite a lifelong dread of falling to my death and a plate full of unedited Floyd retrospectives, I would have jumped at the chance to take Weaver's spot on that chase plane - if only to scratch another sphincter notch on my Sony. Still, the News Gods made the right choice, for if - God forbid - something were to go happen to the pilot in mid-flight Weaver would push the guy aside and request a vector, Victor. Me - I'd simultaneously soil myself while swearing in seven syllable soliloquies.

Like a weathered but still proud gargoyle hunched above the Fourth Estate, the broadcasting vet can't help but wonder what's crumbling underneath. Okay it's not that Gothic, but the rate of decay is all the talk in the TV News kingdom, from the Earls of Anchordom to the serfs with tripods in their oxcarts. From my particular perch, I see nothing but upheaval on the horizon, a relentless schism that will leave the media landscape unrecognizable to all but who enter it anew. Then again, I'm not the only stone monkey dragon thingie peering into the distance. Many a village elder and more than a few damsels in tight dresses have clamored for a better view. What they've spotted has caused many of them to breach the fiefdom, to run screaming for higher ground, wherever their checkbooks or cheekbones would take them. Me, I'm part of the architecture - but even a sculpted dolt like me has to ask himself...

"Why am I still hanging around?"

That query is answered of course every time I pull into Castle Pittman. Let's face it: no one's going to pay me to sit around and pen venomous epistles for the internet. Not yet anyway. There's plenty of TV in my future and not just the 42 inch Sony I sit with my back to most every night. No, I make my living off the evening news and while it ain't the deep kick it was back in '91, I still dig it more days than not. Truthfully, it's all I know. Running around mass communicatin' is something I've done for most of my adult life. Thus, I see the world through a prism of lenses, one eye buried in the 'finder while the other scans the room for the very next view. It ain't a habit that lines your pockets with silver. Dead 9-volts, maybe, but not silver. That kind of currency's reserved for folks with far duller gigs that mine. I get paid in access, perspective and two week increments. It'll never land me a shopping spree in Belize but I knew that the moment I first dedicated myself to the pursuit of news. I just never realized how quickly the world would change.

Audience, technology, resources and rewards are at levels unthinkable just a few years back. Even us squatting quadrupeds have had to sit up and take notice - a tough enough nut when you're forever burdened with deadlines and live shots. From here, it's easy to bury your head in the morass of the next newscast, provided those newscasts keep on coming. I'm not so convinced they will, which is a helluva thing to mutter out loud, for when I first hoisted a fancycam it was generally agreed the evening news would last forever. Well, score one for the odd oracle out there who predicted a renaissance. Most of us weren't listening, cleaving instead to our individual disciplines as the calendar pages fanned before us. Me, I got lost in the pixels and fell in love with a form of communication that never had much respect for itself. That's cool; I didn't have much else planned anyway. But as the rub of unending updates has worn away my reserves and I find myself wondering if I should have a crack at my shackles and at least attempt to fly away. Sure beats choking on the coming rubble...

Now help me up, would ya? My haunches are killing me.
Posted by Lenslinger at 4:08 PM 3 comments: