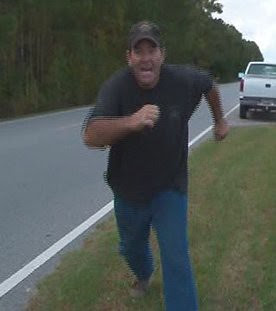 Since he never laid a hand on the camera crew, we can't very well issue a Schmuck Alert, but we here at the Lenslinger Institute would like to recognize the brother of South Carolina Lt. Governor Ken Ard for setting back the image of Southern Men at least a couple of decades. Not since Billy Carter upchucked on those Bicentennial cupcakes has a Governor's brother made such an unabashed ass of himself. (Somewhere in Arkansas, Roger Clinton is feeling pangs of regret over that Playgirl spread he bailed on.) Anyway, senior staff met overnight on the matter and while Sammy Ard won't be granted full Schmuck status, we did agree he's an egregious dill-weed...

I'm not sure what WIS-TV's Jody Barr expected to find at the auto body business owned by Sammy Ard last week, but chances are 'unhinged dullard' wasn't written on his reporter's notepad. That's about what he and his photog found though as none other than the Lieutenant Governor's brother rushed out to identify himself.

"MUHNAMESAMMYARDDUHLOOTENTGUBNERSEFFINBRUTHER!"
At least I think that's what he said. Truth is, even a Southerner like myself had to play it back twice to understand the man. Locals will no doubt grow sick of the sound after Lt. Governor Ken Ard's opponents run it into the ground come re-election time. That is, if he makes it that far. Currently, he's facing a state grand jury investigation into how he funded his campaign. Seems Sammy donated the maximum amount and testified before the grand jury - one day before showing his true color to the evening news. Nice move, bro. With family like you, your brother won't need any political enemies.

Same As It Never Was 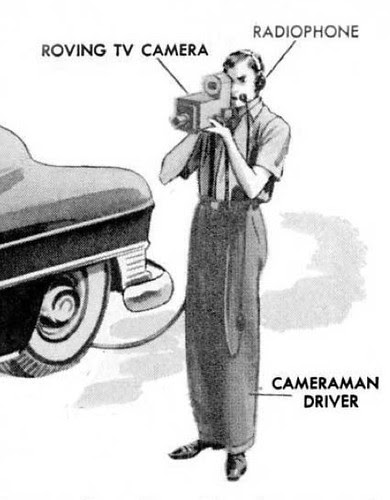 See Dick Run. See Dick Shoot. See Dick sport a pair of wool slacks that'll make generations of lensers break out in hives. Honestly, if a guy with that much dip in his 'do came at ME with a camera, I'd kick him square between the Darrins. Maybe then, he'd stay out of my subconscious - instead of wandering into my every other day dream like some overdressed specter. Did photogs, I'm sorry, "cameraman drivers", ever really look like that? Apparently so, but in my two decades behind the glass, I've not met a single news shooter who could double as that Dad from Dennis the Menace. Then again, I don't get out of Carolina much. Perhaps in Metropolis, mortal recordists dress like Clark Kent. Here in the shallow South, we favor the Suburban Dad turned Survivalist duds -that is when we're not rockin' the mismatched cabana-wear of seaside drifters the globe over. That look never goes out of style. But don't take my word for it. Ask Amanda Emily, the sharp-eyed archivist who forgoes fashion for fresh relics from the ash-heap of TV history. Maybe that's where she found this broadcast schematic - a bold mobile coverage plan, slathered in Mad Man fashion and dripping in retro-tech...

Talk about timeless.
Posted by Lenslinger at 10:45 PM 1 comment: I know what you're thinking: someone threw away a perfectly good photog. But I assure you, Rick Portier is far from discarded. In fact, he's hard at work , rewiring some pesky patch panel in the back of that live truck, -- or aiming his new squirt gun at an unsuspecting reporter. Either way, he's finding new ways to thrive in a changing work environment while demonstrating his mastery of a photog fundamental: Flexibility.

That's right, it takes more than a sharp eye and a drifter's wardrobe to succeed behind the lens. You gotta be limber. Circus freak limber. How else are you fit in that cop car cockpit? Or commandeer that golf-cart? Or hold that fancycam over your head while parade float rolls over your toes? I'm not saying you have to be a straight-up contortionist, but if you're gonna roll up on a clotted scrum and expect to get more than a face full of camera battery, you better snap back mosh after mosh.

Of course with point of view cameras and news crews of one, the lost art of the lens jockey will go the way of the test pattern. No more will stations rely on grubby underlings with malleable backs and zero social skills to procure fresh footage. Hey, why hire some guy you wouldn't allow in your home to hang off that speed boat when you can send Newsbreak Barbie and a couple of suction cups? Come to think of it, such a thing might convince even ME to tune in.

Still, I worry about all those pliant news vets out there - the ones who customized their skill sets to fit every newscast. Where they gonna go? I knew one dude - we'll call him Flexy- he could backpedal on his buttocks, hold his breath for the better part of a telethon and grip an entire light kit with his forehead. How are those skills gonna translate to the real world when his trusty TV gig is rendered obsolete by a buxom blonde with camera implants?

Don't bother answering. I'd have to remove this tripod plate from my chin just to write it down.
Posted by Lenslinger at 9:32 PM 1 comment: