Glance the Night Away 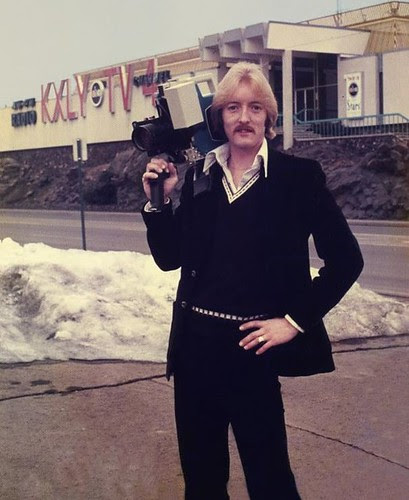 Not so very often Man and Moment collide, leaving such an indelible impression he ends up defining a generation. That or he just really embarrasses his future kids. I should know. All of which is why I had to breathe into a paper bag for a few minutes the first time I took in the sartorial head-spin that is/was Ed Springer...

Note how the feathered hair and the butterfly collar frames the Burt Reynolds' mustache just so. Throw in a jaunty pose and some serious waist piping on that sweater vest and you have a lothario under glass. And what glass! Why, just the pistol-grip on that antiquated mini-cam should have its own display case at the Newseum! But please, don't think I'm making fun of the man. Back when Springer was styling and profiling, I was hunched over a multiplication table wondering how I was gonna make a living without math. Had a cameraman with such panache wandered into my fourth grade class, I would have followed him around until someone filed a restraining order.

Now if you'll excuse me, I'm suddenly in the mood for some BeeGees. Can't remember the last time that happened...
Posted by Lenslinger at 9:20 PM 2 comments: 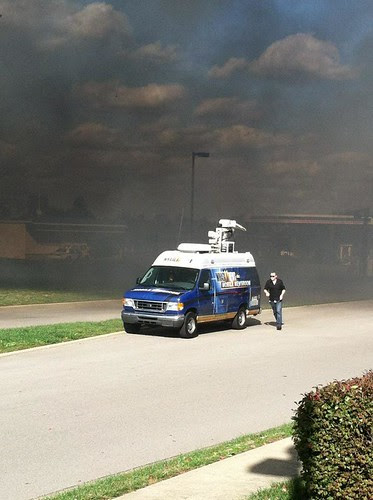 Some might call it a snapshot, but to me this picture of young photog on the go has all the makings of a motivational poster. The dude's name is Bryant James Vander Weerd (and what a name that is!) When he's not splitting the scenery at the first sign of demonic smoke plume, Vander Weerd shoots and edits fresh footage for WHAS11 News. It's the kind of thankless gig that can take a young man anywhere, from a cushy spot at the cabbage queen pageant to the slim margin of safety of a not so distant inferno. That seems to be what's happening above, as our hero splits the scenery solely because his newest assignment was about to blot out the sun. But don't let me church it up, let's hear from the man in black himself:


"This was taken at a strip mall fire in Sellersburg, Indiana. To the left in the frame is supposed to be a mass of fire trucks, but it's very windy today and all of a sudden I'm bombarded with water, smoke, and pieces of toasted shopping center. Totally lost sight of the building. Not exactly an ideal place to do a live shot!"

Not at all, Bryant James Vander Weerd, not at all. Glad you moved. But hey, if you could just run back and grab one of those smoldering chunks of insulation,  the anchors need something to pass back and forth during happy talk. Just don't come into the newsroom, as by now you smell like a melted hosiery outlet. The chicks may not dig it, but you and I both know it smells like freedom. FREEE-DOM!!!!!!

(Sorry, motivational posters do that to me.)
Posted by Lenslinger at 8:32 PM 4 comments: 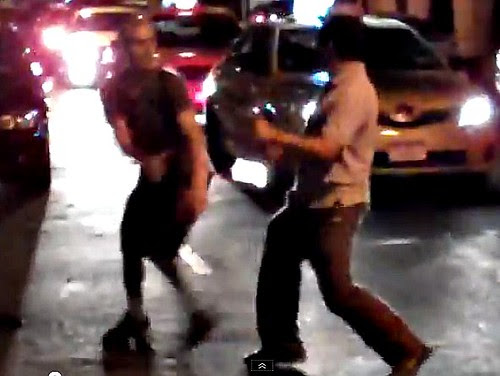 Hey Sports Fans! Bummed out about the NBA cancelling the first two weeks of their season? Me neither! The last time I watched a professional basketball game, Michael Jordan rocked knee-socks and a low-top fade. Now, however, the league of thuggish millionaires is providing more entertainment than they have in years - all by staying the hell off the hardwood. It all started during the Derek Fisher press conference when two camera-AHEM-men began arguing over who had the larger Holly Hobbie collection where each other should stand during the interview. Voices sharpened, hollow chests filled with air, spare batteries caught fire from sheer bellicosity. It was, by all accounts, pathetic. So much so that fellow journos suggested they take their shouting match OUTSIDE - ya know, where truck drivers, sailors and junkies spill blood.

With that, the duo settled down, but once the presser was over they did indeed take their umbrage to the street, though the result was less like the bare-knuckled brawl their colleagues envisioned and more like two Avon ladies squaring off over mixed up lipsticks. Look, I'm way too cowardly, er, cerebral to advocate violence, but if you're gonna bow up like that in front of a bored pack of photographers, you'd best break out the haymakers, 'cause your half-empty can of whoop ass is about to preserved for all of eternity. You might even want to throw a punch. One you expect to land.

Oddly enough, that never really happened. What did go down was an awkward waltz,  an exercise in avoidance, a thrilla in vanilla, if you will (even if you won't). For an excruciating ninety-four seconds the two brutes circled each other, wavering on the edge of actual fisticuffs. They danced, they flexed, they grimaced...they grimaced again. Watching it, one gets the feeling they were waiting for the slow-motion effect from The Matrix to kick in. It never did. Instead these two morons delivered a few half hearted kicks (where I come from, you only kick a man when he's down - and only then when no one's looking), eliciting only giggles from the crowd before they lose interest and wander cruelly out of frame.

Fellas, please! There are better ways to make TMZ. Frankly, footage of you crawling out of a limo without panties would be less humiliating than that (lack of) action sequence. I've seen gnarlier clashes at cat shows. So, whether you two were trying to embarrass yourselves or you're both just really bad at pulling off flash mobs, I implore you to go BIG or go home. Otherwise you're just lowering the reputed testosterone levels of photogs everywhere by sixteen hundred Tony Danzas or Midi-chloridians or whatever the hell you use to to measure machismo. You're also making it awfully easy for pajama-clad pundits like me to make fun of you and while I appreciate the work, I'd much rather you sting like a bee instead of just floating there like a couple of confused and flaccid butterflies.

Now back to your corners and come out swingin'.

We interrupt this lack of updates to bring you a special bulletin: Your not so humble lenslinger is tired of talking television. Hey, I slave over a glowing viewfinder for, like, eight hours a day sometimes. When I get home, there are "Honey-Do's" to negotiate, teenager daughters to embarrass with my mere presence and a rather lippy Eskimo Spitz mix to parade around the neighborhood. By the time I plop down in front of my beloved Mac, I can't always spell T-V, let alone wax poetically on its foibles and future. A shame really; if I could sync up my desire to write with my erratic ability, I might just be able to pry this camera off my shoulder for good. Then again, I can't seem to add new music to my iPod without the assistance of my (embarrassed) 17 year old - who gets her vengeance by loading it down with songs from Phantom of the Opera. Why I'd think I could summon the muse and the tools at the same time makes about as much sense as anything Andrew Lloyd Webber wrote resonating with a high school senior in the year 2011.

Or to be more accurate, I've wandered away from my source material. That's happened pretty regularly in my nearly even years of blogging and I'm more than certain it'll happen again. Whereas I used to make some grand proclamation whenever my focus softened, I've leaned that announcing one's plans is a sure-fire way to make God spit ocean water through his nose. But while I'm on the subject, let me assure you that I'm way to needy a writer-type to ever shut this blog down completely. I've come close a couple of times, but my fragile ego and strong desire to see this thing through always stops me from dismantling this compendium of snark. Simply put, there's no downside to continuing. Unlike my day job - in which I fill two minutes or so news cast every (damn) day - the pace of publication for Viewfinder BLUES is totally up to me. Just remind me of that the next time I'm staring holes into my bedroom ceiling at four in the morning.

Or better yet, catch me on the lake.

That's where you can find me these days, for I finally grew so tired of stepping over the kayaks in my garage that I now park them in the 816 acre watershed out behind my home The Lenslinger Institute.It's proven surprisingly therapeutic, whether I'm racing dragonflies across Lake Brandt's surface or simply bobbing for solitude off it's heavily wooded shoreline. Ya know, I never thought I'd end up as that middle age guy in the plastic boat, but now that I've given up any hope of a sports car (wife got one), there may simply be no paddling back. And while there are less taxing forms of aquatic conveyance, I found that paddling is key. See, like mountain biking, poking around a lake (or river) is both calisthenic AND contemplative. Not to mention, you're sitting down the entire time. That's MY kind of workout! Yeah, sometimes I'll just float there with one eye on the sky - should that alien spacecraft I've dreamed about ever hover over my vessel and beam the both of us aboard...

Maybe then I'd have something to write about.
Posted by Lenslinger at 10:53 PM 1 comment: