Few forces of nature are insidious as floodwater. It's something I first realized while floating through a sea of dead cattle. That was more than ten years past and I still smell the desperation that Hurricane Floyd left in its rainy wake. Now a similar surge has laid waste to much of Music City and a friend of the blog has suffered as a result.

Longtime readers of Viewfinder BLUES will no doubt remember Eric White, that lanky everyman who poured his endless reserves of enthusiasm into what can be a very thankless job. After four years as a general assignment reporter here in the Piedmont, "Whitey" left El Ocho a better place than he found it, bagging a local Emmy before he left for the flat screens of Nashville. There, he flourished - proving himself a capable storyteller in a larger, busier market before turning his thoughts to higher education. In the meantime, he more than enjoyed his downtown apartment...

I guess you can see where this is going. Whitey was out of state visiting family when the deluge that threatened to swallow Nashville settled in. By the time he returned, there was five and a half feet of water in his apartment - an apartment he was no longer allowed to enter... Word went out. Through new social networking and old fashioned phone calls, associates far and wide learned the most decent guy they ever worked with had just lost most of what he owned. Hearts ached, hands dug into pockets and before it was over I wasn't the only schlub feeling good about helping an old friend. Meanwhile, Eric perservered and - if I know him correctly - tried to dodge any local coverage of his waterlogged plight. Well, eventually his current coworkers got him in front of a camera and produced a piece that is as touching as it is understated.

Days ago, Whitey finally got into his apartment. Most of the water was gone, but the pallor it left over this single man's belongings won't soon wash out. Among the higher-end items lost were his new Mac laptop and a treasured PS3, no tto mention all the other things we take for garnted until they soak in near-sewage. But Eric knows others in Nashville fared a lot worse, so don't look for this eternal optimist to start complaining. Heck, he even Emmy got his back, the grimy press passes looped around it now serving as a fine conversation starter. Godspeed, Whitey...
Posted by Lenslinger at 3:25 PM No comments:

It should be noted that when overnight assignment editor Jacki Cisneros realized she and her husband had just won the Mega Millions Lottery, she finished out her shift. Mature? Youbetcha, but I suspect 266 million dollars would cause this photog to promptly go Kent Brockman...

No doubt I'd high-five a few coworkers on my way out the door, but cruel fate would probably intervene in the form of a misjudged knuckle-bump and I'd end up fracturing my clavicle.

One things for sure: I'm hiring Sharon Jones and the Dap Kings to play my going-insane, er going-away party.

Once I checked out of rehab, I'd call together key County Commissioners, City Councilmen and assorted school board members to tell them once and for all that the cameraman in the corner considers them complete and utter buffoons. Then I'd probably leave town.

No way I'm buying anything as doomed as a TV station, but you can look for those late night infomercials to be replaced by my personal reel mixed in with every episode of Bullwinkle.

Using my new found renown, I'd bring important reform to the rental cop agency, work to ban the revolving door and sink some serious coin in the company that makes yellow crime tape. That shit's got a future.

I'd rent the top of some high-rise as my workspace, lock myself in and finally write that damn book. Weeks later I'd probably be spotted in a downtown park - wearing a top hat and monocle - telling stroller moms and woodchucks alike that I was finally gonna start writing that damn book.
Posted by Lenslinger at 10:23 PM 2 comments: 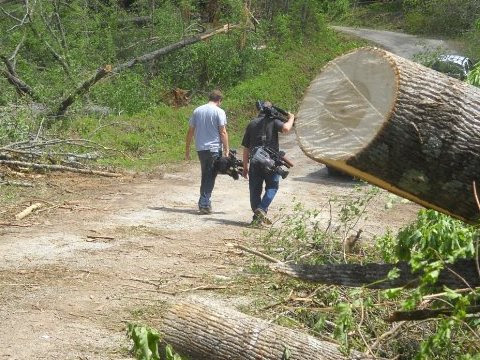 News doesn't happen in a newsroom. It seeps into the nooks and crannies of your adopted region; down dusty, dead-end roads and up long, plastic hallways. I know, for I am but one of many lenslingers paid to collect perspectives. It's an interesting living and until ACME Products perfects the News Drone 5000, there should be adventure a plenty for those thick enough to pick up a lens. But be forewarned: Numbing discomfort afflict all who enter here. Consider it the price of admission. See, war stories don't ring true unless the teller wears a few scars. It's what separates us from the Producer Class, that rare ability to remember news events by the way they smelled and felt, not just the way they shimmered on the far wall of a crowded booth. Wanna shoot news? You gotta find it first - and contrary to what those wretched deskies think, there is no drive-thru window in the game of Life. Even a few fleeting seconds of footage can require a dirty walk in and an even dirtier walk out.

And that's on a normal day.

Lately, Nashville hasn't had many normal days. One look at the national news proves that. But the flood waters that are swallowing Music City have a far bigger effect on the local guys than your average network news crew. It's their home. True, it's a chance for all Nashville stations to shine, but it's awfully hard to perform superhuman feats when your own lair is swirling in dirty runoff. But that's whats happening in Central Tennessee and it's not quite registering on the national consciousness in the way that Katrina did. Why that is I'm not really sure, but I'd like to take this opportunity to extend a heartfelt shout-out to all the local news crews currently dealing with the insidious beast that is a flood. We have many friends in Nashville: Eric, Nicole, Smitty, Cordan and Roxy, to name a few. It's hit some harder than others (Help is on the way, Whitey!), but chances are they've been too busy scrambling for purchase to soak in the longview. Better days are on the way, folks. What you're living through is miserable history and the only small solace is that you won't need any periodicals or network specials to recall the onset of Summer, 2010.

What with a giant oil slick headed for our shore, random news crews are popping up along the Gulf Coast in hopes they'll be the first to spot the blob. It would all be delightfully absurd - were it not such an environmental Waterloo. Still, it's one more reminder that no matter what peril our planet faces, there will be a clot of its most annoying citizens thrusting lights and lenses at the gaping maw of the moment. I'm reminded of the Summer of the Shark a few years back, when field producers from FOX News were caught spreading chum just off Martha's Vineyard. Okay, so that never happened (as far as we know), but you can rest assured that if a hovering spaceship suddenly appeared and started turning citizens inside out, news reporters would rush to the scene and fight for a proper spot in which to debut their designer entrails. Worse yet, they'd drag a hapless shooter like myself alone and before you know it my ignoble end is being twisted into a Made For TV Movie starring that guy who played McLovin' as the furry cameraman who got too close.

That's an intestinal tract I don't need to share with the world, but I cannot guarantee it won't happen, for despite all my armchair smarm, I too rush headlong into misfortune with the notion I won't get hurt as long as I'm packin' a Sony of my owny. Hurricanes, forest fire, daycare stroller regatta: there are few scenarios even a reticent bookworm like me won't storm. Chalk it up to foolish pride, occupational myopia or the mistaken assumption that I deserve a front row seat solely because I spoon-feed select images to the great unwashed. So the very next time a volcano upchucks, or a tribe of Sleestax takes over the Post Office or some fry-cook finds an image of the Virgin Mary burnished into a hamburger bun, remind me how I'm just a mid-market photog with a writing compulsion, severe tennis elbow and a five foot nothing wife of twenty years who might actually miss me should I wind up disemboweled on the evening news...


Ever wonder what it's like to work the overnight shift? Tony Smyth knows. For a quarter of a century the CBC shooter has prowled the meaner streets of Toronto, surviving on a diet of 'death, destruction and drive-thru coffee'. Now his coworker Muhammad Lila has turned the lens of him and created an elegant, bracing and ultimately depressive look at what passes for news after midnight. Despite the grisly assignments, Smyth seems resigned if not happy to babysit crime scenes and fatal car crashes. No shame in that game - but feasting on what the big city will serve up that night' takes an intestinal fortitude your not so humble author sometimes lacks. I ain't skeered - most folk leave us photogs alone. But a steady stream of carnage and regret effs with my head - and I find myself yearning for a sunnier gig to recalibrate my dome. Not Smyth. He's happy to process midnight calamity into breakfast television, knowing that 'nothing's official until Dawn breaks'.