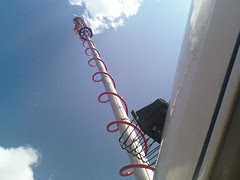 Ever huddle on the rim of someone's discontent and throw up a big ole antennae? It sounds like an awfully rude thing to do but it's exactly the tactic employed by your typical news crew. I'm talking about those cursed live trucks, a fleet of vehicles I've heaped dispersions on ever since I first piloted one across the Piedmont. Wicked blind spots, missing 9-volts, fast food detritus: the average TV news van has all the charm of a bus stop. And it's that business of waiting I find so grating, for nothing slows time like the rough idle of a fully-striped live truck. Throw in these vehicle's natural attraction to black smoke and fresh traffic jams and you have a couple of reasons why I won't spend my retirement hunting rest stops in a motor home. I'd just as soon sit through all those groundbreaking speeches I left on the cutting room floor... again. 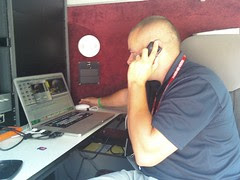 Luckily, most modern day news crews aren't as haunted as I when it comes to manning these outposts. In fact, some even prefer the environs of a remote locale, eager to wallow in near solitude as they process the atrocity of your typical news day. Take Scott and Sheeka. The other day, this intrepid pair positioned their craft outside the Davidson County courthouse and happily hunkered down for an afternoon of editing under glass. Despite my grumblings, I have great respect for that kind of work ethic, so when I finished with my clown convention/three-eared yak/mortuary camp story, I decided to hustle on down there and lend 'em my support... Okay so the suits insisted I go see if they could use some extra help, but hey, if you want a documentary, go turn on PBS, I'm talkin' here! Now, so where was I? Oh yeah, clinging to the hull of an unmarked news van in the mean streets of Lexington. I only had to knock six times before my colleagues tore themselves away from their laptops long enough to let me in. Inside the lack of tension was palpable. From the looks of the ice level Big Gulp cups, this seasoned news crew has everything under (remote) control. Thus, I decided if I could not help them, I'd harass - er, observe them in action. Sheekers barely noticed, probably because she was locked in a staring contest with a progress bar that refused to blink. It didn't surprise me, as I've found Sheeka (Shakira, to strangers) to be proud, pleasant, poised. She doesn't even lose her cool when certain photogs climb the mast and scream for back-up. How do I know? She didn't even flinch when the fire department came to help me down. 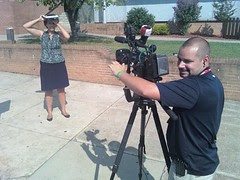 Then there's Scott. A battle-hardened veteran of the South Carolina news skirmishes, Mr. Garrand is highly skilled - without that creepy thousand yard stare that tends to set in during one's second decade of deadline execution. Come to think of it, dude many be the cheeriest news shooter I've ever met - a fact which makes me truly like - if not trust - him. Heck, he didn't even get surly when I grabbed a reflector and tried to turn Sheeka's corneas to dust seconds before air! That's interior bliss, my friend. It's just the kind of cosmic feng shui all news crews should display in the field and I kept trying to let 'em know ()in my own special way) they had my respect and I had their back -- right until Sheeka tossed it to her piece, at which point both reporter and photog turned my way and, ever so kindly, asked me to leave...

Perhaps it was the vuvuzela.
Posted by Lenslinger at 10:35 PM No comments: