Sticks in the Distance

From the Associated Press, a fine frame captured by Gerry Broome at Jordan Lake yesterday. I for one love everything about it: the suncast determination on volunteer Ron Clark's face as he readies his thrust, the frozen squawk of protest from the indignant eagle, and even the bend of the cameraman's knees. It's a pensive (and protective) position, wisely chosen by the anonymous(?) photog - should the jettisoned raptor suddenly veer off from his intended course of glory and proceed to dive-bomb the fleshier side of our good man's fancy-cam. Delusional? Perhaps - but take it from someone who's happily one-eyed every form of weasel, dog and pony show there is ... stay loose!

(As for the title of our hasty post, consider the three-legged beast grazing in the backdrop. If you're a news-shooter, it's all you see...)
Posted by Lenslinger at 12:10 PM 1 comment:

Over at Under Exposed, veteran news hunter Richard Adkins waxes on the art of mobile map management - a dying discipline in the days of Mapquest and onboard GPS:

"There’s nothing like a paper map to give you a hands-on feel for the drive. Paper maps give you an overall look at the lay of the land, a bird’s eye view so you can see all your alternatives at once." 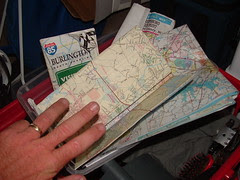 If RAD’s love for his onboard charts strikes you as odd, well then - you’ve never raced to a fresh plane crash on the far corner of an outlying county. I have - and I’m here to tell you, an ample atlas stash in the glove compartment is just as important as that fancy-cam sloshing around in back. More so, for if you can’t find your way to the smoldering wreckage in the first place, no degree of cinematic intent will appease the angry News Gods. It can mean the difference between quizzing the pilot as he stumbles away from the mangled craft and interviewing the driver of the flatbed truck who’s about to haul off the last remains of the twisted bird. I can hear the anchor dancing now, “The lack of video in the following piece is brought to you by ace photographer Roger Soreback, who, despite a flurry of cursed-filled u-turns, never managed to make it on scene...” Trust me, it’s not the kind of on-camera plug you wanna put at the top of your resume tape. Go with a montage, instead... 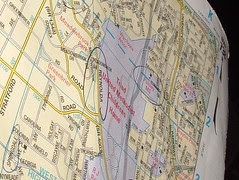 Despite the wisdom of printed directions, I’d be w-a-y less than honest if I implied my own cache of maps was in such pristine condition. Rather, my streamlined file is in reality a mangled heap of faded hieroglyphics, badly folded origami featuring dozens of circled side streets and the blotches of a few too many jostled condiments. (Head East out of town on Highway 64, then hang a left at the small inland sea of Ranch Dressing...) Still, I’m quite attached to my tracts of topography at scale. I still get a tactile thrill from blindly thumbing through its many greasy folds while I scan the horizon for smoke plumes and steer with my knee. Simply keying in the coordinates and having some disembodied voice lead me the rest of the way just seems wrong in my book (of which several key pages are missing). For now, I’ll forgo any satellite rendered assistance, any housewife-sanctioned cyber-map printout. Give the me the glossy fold-away, the tattered road atlas, the chamber of commerce freebie that counts among vital landmarks all three locations of participating Shoe Carnivals.

I’ll get there, somehow - and I’ll be the prouder photog for it. Besides, how may times can you glop Big Mac ooze on that gleaming GPS unit, before the boys at Radio Shack stop returning your calls? My guess is, no more than three.
Posted by Lenslinger at 10:54 PM 1 comment: 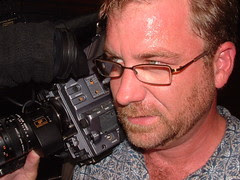 Ten minutes into ‘The Pits’, I was drenched. Everyone was - the sweaty Mexican guys shoveling fire and their benevolent boss, Chip Stamey. Blinking back forehead water, the third generation barbecue baron watched me skulk about his smokehouse through a prism of perspiration. Why exactly the TV dude wanted to swelter outback with the pork shoulders wasn’t all that clear - but Warner Stamey’s grandson is far too skilled a businessman to turn down a curious cameraman. Besides, it ain’t the first time I’ve shown up at his restaurant with an odd request. Usually, it has something to do with an event at the Greensboro Coliseum next door, but today I was simply in seek of the heat. As always, Chip delivered. 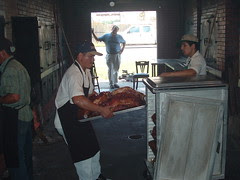 I’d spent the morning pursuing more frigid temperatures. With the dog days upon us, I was looking for people who worked in shockingly cold environs - a visual yen to the summertime yang, if you will. I once shot a few minutes inside a local dairy’s hardening room - a sub zero freezer where ice cream is set to do ... whatever it is ice cream does in the deep dank dark. Memories of shivering uncontrollably that day while parka-clad workers got their ‘Willy Wonka on’ convinced me to revisit the scene on an insufferably hot day as this, but alas corporate PR flacks got in the way. After a punishing round of no-go phone-tag, I found myself sitting on empty, loitering in my cubicle as the noon hour approached. So I made a mad dash to Stamey’s and thought about the opposites. 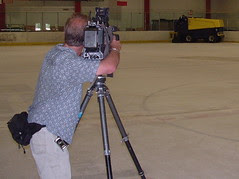 All of which explains why, within a half hour of mopping my sweaty brow over those slow roasted pork shoulders, a shiver ran down my spine as I goose stepped across the shiny expanse of the Greensboro Icehouse. General Manager Chuck Burch barely batted an eye as I dragged my sticks onto the rink and took aim at the lumbering leviathan in the distance, a bored Zamboni driver hunched at his workaday wheel. Perhaps the staff had seen me stalking youthful skaters through the glass a few minutes earlier, leaning into my frosty viewfinder and ignoring the white-hot rage of a hopped-up hockey Dad screaming from the sidelines. ‘Hey, I’m just here for the elements’ I muttered as I scanned the walls for a visible thermometer to shoot. A few more frigid frames and I’d have the dichotomy of shots I needed for yet another minute-thirty masterpiece...

Beats workin’ for a living.
Posted by Lenslinger at 10:42 PM No comments:

Crazy on a Ship of Fools 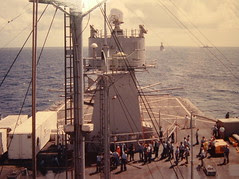 ‘Fecund Stench’, a local blogging demagogue and amateur naval archivist, has kindly chosen a vessel from my past to feature as the weekly banner image on his own potent site. Thanks, Fec. Not only have you shone the spotlight on a thoroughly impressive ship, but you’ve dredged up memories I buried at sea a l-o-n-g time ago. While I’m less than ready to examine everything I did or even witnessed while in uniform, I do recognize that period of my young life for exactly what it is - saltwater fodder for one hell of a coming-of-age story. I’ve known it since the day I last came ashore, yet I’m still not one-tenth the writer I’ll need to be to fully capture my surreal stint in uniform, even if the impressions are still clearly visible on my frontal lobe. 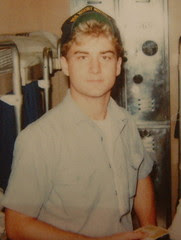 After all, I was just a kid - a bookish underachiever with a few dozen wild oats still to be sewn. How I came to enlist in the first place is a lesson in improbability. Never one to embrace responsibility, I exhausted the patience of every lucid adult I encountered with my lack of life skills and my abundance of smart-ass remarks. Once those wise grown-ups let me fall on my face a time or three, it occurred to me I desperately needed a new direction. So, under the influence of a delusional roommate’s naïve advice and who knows what else, I wandered into the local recruiter’s office and defied them to take me away. When they finished doing back-flips, they shoved a sheaf of important looking papers under my scruffy chin and I started signing. 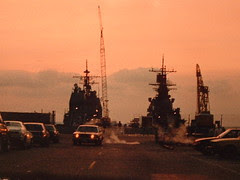 A few weeks later, I found myself standing at exhausted attention on an icy parking lot, as the frigid winds off Lake Michigan turned my nose hairs to brittle stalactites. Somewhere behind me, a small, leathery man whom I truly believed to demon screamed obscenities at my brand new bestest buddy. As the swarthy agent of hell force-marched us to the mess hall for a lightning round of freeze-dried dog food, I wracked my addled brain trying to remember why exactly I’d willingly volunteered to go to prison. A month earlier I’d been an underage lothario of sorts, a harmless hoodlum of the shaggy sort quite happy to ply my charms on any young college cutie who didn’t mind slumming for awhile. It wasn’t an perfect existence, but as I double-timed it back to formation with a greasy bacon substitute roiling in my gut - my memories of it seemed pretty idyllic. 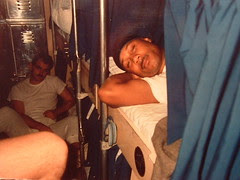 But that was only boot camp - an idealistic prelude to the ocean bound adventure awaiting me. While it took several weeks of nautical instruction to convince me these cats actually wanted me to live on a boat - I eventually seized on the idea and successfully completed my training. Newly qualified to operate navigational radar ( and chip paint with the best of them), I checked aboard my first ship just after nine in the evening. With a scowl and a curse the Officer of the Deck signed my orders and led my sea-bag laden form down a pitch black passageway. Motioning me into a darkened compartment, the annoyed Officer instructed me to climb a rickety ladder to the smelly top bunk that would be my new home. I did and, fully clothed, curled up around my sea-bag and lost consciousness.

Seven fiftful hours later, I awoke to find myself the object of amused derision. As the surliest of salty-dawgs rubbed their bleary eyes and pulled on incredibly crusty socks, they heckled, hounded and harangued the new boot staring back at them from the top rack. It was then I realized I was in too deep.
Posted by Lenslinger at 9:23 PM 4 comments:

Having spent the past week prone, boneless and comatose, the wife is now demanding I raise my pulse to that of an average cadaver.

“No problem,” I nod - as another twisted guitar solo flickers through my subconscious. "I’ll get right on that and the lawn - just as soon as I finish watching these three dozen Stevie Ray bootlegs on YouTube. Until then, I reserve the right to remain suitably useless, intensely inert, tenaciously incapable of any acts of urgency. Sure, I make it look easy, but a catatonic state of this level requires extraordinary dedication to the science of restraint. A street level shooter of my camera-acumen cannot dash about madly 52 ceaseless weeks a year, ya know? I owe it to my viewers to return to the broadcast refreshed and energized, able to pounce on the next available calamity with the speed of a cheetah and the bloodlust of a jacked-up badger. It’s a jungle out there, all right, heavy with humidity and teeming with predators… overzealous assignment editors, insipid public information officers and the occasional rabid rent-a-cop. No ma’am I cannot risk hurling myself into that perilous void without the proper amount of Zen-like preparation, endless hours spent locked in grueling inaction. It's all a part of a strict regiment of feng shui fitness, focused solely on my triumphant return to the news scene of someone else’s liking. For tomorrow I don the visage of mercenary journalist, a dusty lenslinger riding the horizon to make the electronic frontier safe from the onslaught of a thousand nefarious press releasers - Hmm? What’s that honey?”