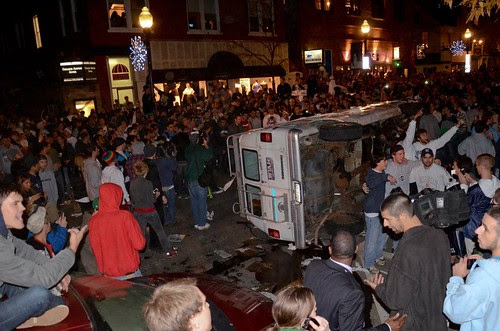 Hey, I'm not the guy to mourn the loss of a live truck, but after watching footage of Penn State students flipping one on its side, I'm reconsidering my long-held spite for these lumbering beasts. At least I can take solace in the fact that the WTAJ live truck lying on its side deserved such an ignoble end. After all, what else do you do when your university fires a folk hero? Express regret over a system that enabled a monster to stalk little boys for many, many years? Stop and consider that something as trivial as college football seems even more inconsequential in the face of serial child-rape? Volunteer to help the victims put their lives back together? Pen a thesis on the poisonous group-think that allowed a sexual predator to hunt children under the auspices of your hallowed university? Naaaaaah, you go out and party! You take to the streets in numbers and destroy everything in sight - all because a football coach you blindly worshiped seems to have little to no problem with pedophilia. Who couldn't get behind a cause like that?

Well... ME. Then again, I didn't go to college, don't watch a lot of football and generally disapprove of grown men rodgering little boys. Maybe that's why I can't fathom why Penn State students would riot over the professional demise of an athletic coach - a coach! And riot they did, eventually toppling the very live truck that was unmistakeably the culprit in all this unrest. You know, at least the mob that tore Kadhaffi apart had decades of murderous subjugation to blame for their bloodlust. What do Penn State students have - less of a reason to tailgate this Saturday? Now, I've covered enough protests to recognize the extraordinary madness of crowds, but even this one baffles me. It pisses me off, too. I got friends who work in that market and I can only hope and pray that none were injured in this, the world's stupidest melee. Way to go, Penn State! You've forever sullied the name of a once great university, struck a blow in the name of perversion and made the very worst of the Occupy Wall Street crowd seem quite reasonable by comparison. I just didn't think that was possible. 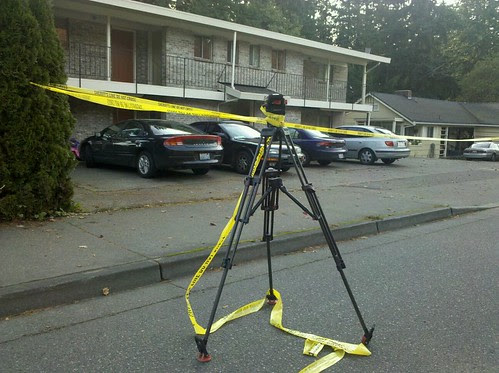 I've watched cops wrap crime tape around many different things: dumpsters, stop signs, dozing hobos. But an innocent set of sticks? It just seems so wrong - like a news shooter interviewing a Senator against a plate glass window 'cause he just don't give a damn. In fact, I wouldn't have thought such banner abuse was even possible, had this photo by KING-TV's Randy Eng not surfaced on the interwebs. Okay, it's no double rainbow, but what does it mean? WHAT DOES IT MEAN?


"A KIRO-TV photographer ran off to interview a person possibly involved with a shooting. Not long after he left, the officer (whose car the tape was tied to) had to leave. The officer was in a hurry, so he wrapped the tape around the closest object and sped away. It was a good thing the officer didn't wait: the tripod wasn't reclaimed until almost an hour later!"

Oh. I was hoping for something more... serpentine - like a photog went rogue, got cuffed and stuffed and pissed off the PO-leece so bad they charged his tripod with inciting a riot. Or maybe a news shooter clicked his heels and just disappeared, leaving authorities so confused they draped his camera stand in commemorative yellow. As it stands (get it?), it just sounds like a lazy cop - which is cool and all, as long as they don't try to arrest any news shooters when they find a squad car covered in extension cord. That'll show them.
Posted by Lenslinger at 7:13 AM 1 comment: