Sling and a Prayer

There's a lot to love about Lost in Shangri-La, Mitchell Zuckoff's epic telling of the World War II sightseeing flight that went down in the middle of New Guinea. Only three of the twenty-four Army personnel survived the plane crash: a strapping lieutenant, a reticent tech sergeant and a beautiful young corporal from The Women's Army Corps. Soon the wounded trio find themselves surrounded by stone-age tribesmen as they await rescue from the impenetrable jungle. For three hundred some pages, the survivors wrangle with the natives as military planners hatch a harebrained scheme to return them to civilization. Cross-cultural assumptions, mutual hubris and a sexy heroine: this forgotten yet true episode of the Greatest Generation has it all. But for my money, the bestseller peaks only when a photog drops onto the scene. Literally.

Alexander Cann was a B-movie actor, a failed jewel thief and an accredited war correspondent with the Australian and the Americans Armies. When he heard about the American fliers trapped in the valley known as 'Shangri-La', he did what any rogue journalist would do in the face of a sensational story. He dove right in. Imagine the survivors (and their rescuers') shock when a supply plane passed over the valley and spat out a flaccid figure under an open parachute. The man under the canopy looked to be unconscious. As he floated towards the jungle floor, his soon-to-be hosts yelled instructions to soften his landing. Alex Cann never responded. Instead he landed spread-eagle in the tall grass soem distance away. Those already on the ground rushed to the spot, where the first person to reach Cann made a not so startling discovery.


"Captain...this man is drunk!"
When he sobered up, the filmmaker admitted drinking a fifth of gin before embarking on his first parachute jump. When asked why he would get drunk before leaping out of an airplane, Alexander Cann replied, "I didn't want to hesitate." Of course, hesitation was never his strong suit. Cann stayed with the survivors and the tribe for eleven days, filming odd interaction between the civilized and the primitive before capping off the 5,000 feet of 16 mm film with footage of a most unlikely rescue. Gripping, stilted and dripping with then modern sensibilities, Rescue from Shangri-La brought this collision of cultures to a wider audience before the earth-shattering news of Hiroshima's fate pushed this novelty into the dustbin of history. Zuckoff's engaging new book corrects that oversight, but decades earlier a certain soused cameraman jumped all over the story of a lifetime and, like everything else he tackled in his legendary career, had a damn good time doing it. 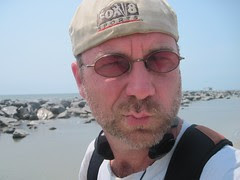 Do forgive me if I've been a little quiet this week, but for once I have a pretty good reason. No, it isn't existential meltdown number eleventy. I've simply been on vacation. Or to be more specific, I've been living in a rented beach house with an understanding woman and four, count 'em, four teenagers. Why, it's enough togetherness to make an off-duty cameraman wish for an overturned two-ton turnip truck to go rush off to. Not that I've fantasized about such a thing. Much. Seriously, I made a sand diorama of this one scenario that required me to be away from the cottage a good three hours. Okay, maybe I didn't but the fact of the mattter is this sabbatical couldn't come soon enough. June marks the start of Swamp-Ass Season in the Southern states. What better way to usher it in than by donning a pair of day-glo swimtrunks and hauling half your living room to the ocean floor? I've covered horder conventions using fewer accoutrements.

Actually, my portage to the shore has become less cumbersome since my girls aged out of Barbie sandcastles. These days, those two stop just shy of a restraining order assure i don't appear with them in public, to whcih I say "Fine. Drag your own chair over the sand dunes!". As to their reluctance to be seen with me, I just don't get it. I even asked another Dad I met on the beach what he thought of this attitude. He pushed back the pith-helmet back on his balding head, picked some fuzz of his see-through v-neck t-shirt and said it was a mystery to him.

Don't get me wrong: I love my family. And if asked by an angry state trooper or grinning game show host, my family would readily admit they love me too. But a man's got to know his limitations. And every Dad needs an escape hatch. For some men, it's a sports car, a golf game or a girlfriend. For me, it's a beach bike, a rather rusty box-store model I cherish one week every summer and pretty much neglect every other day of the year. Yes, astride this gritty steed, I slip the surly bonds of Fatherhood, rocketing down the coastline as fast as a pair of sunburned photog legs can carry me. Lately, I've been rising early and hammering the sand before the stupefying heat commences with the brain cell melting. Most mornings, I end up by the rock pier. It's there a few of us fathers collect by the jetty, soak our bones in the tidal pools and trade stories of gift shop abandoenemnt ans string bikini payback. Sadly, some of the Dads don't want to leave their seaside sanctuary. Yesterday, I sat beside one guy for like six hours and he never once made a motion to move.

How pathetic is THAT?
Posted by Lenslinger at 9:28 PM 2 comments:

I don't know why this brings me so much joy, but it do. Maybe it's because I'm far away from this fracas, even though it's going down in my hometown. Maybe it's because I've shared air with all three of these men and, well, it's just good to see the fellas together again. Whatever the reason, it's more than simple schadenfreude. John Edwards, it seems, is going down in flames. Now facing six felonies for falsifying campaign finance reports to cover up his mistress, the former presidential candidate is (inexplicably) grinning all the way to the courthouse as his lawyers do everything they can to avoid a speedy resolution. His next hearing is scheduled for late July and I'd be shocked if I didn't find myself in the middle of it, or at least on the very edge with fourteen hundred of my closest camera-wielding competitors. For now, however, I'll huddle by the shore and try not to tee-hee at the sight of a certain horndog millionaire being hounded by two working-class weisenheimer buddies of mine - both who just happen to be fine, upstanding family men.

Funny thing, life.
Posted by Lenslinger at 11:32 AM No comments: