Pay no attention to the man behind the van. He's only doin' time. Okay, so a twenty year gig in local television ISN'T a prison sentence; those of us with numbers under our necks just like to pretend it is. See, I'm a lifer. I staggered into this silly business two decades ago and haven't worked up enough momentum to stagger out. I'm okay with that. Sure, I've seen many inmates plot their own escape - even helped a few clear the wall. Back in 1993, I myself even bailed. Fed up with being a one-man-band in a thankless bureau, I ignored my gut instinct and took a job pumping out commercial dreck for the man. I hated it and it hated me. So I followed some of the smartest folks I knew to a place called El Ocho. There I found a home where I could write, shoot and edit for a daily wage. Yeah - I thought my news bosses would take one look at my coterie of skills and insist I go back On Air. It did not happen. And as my hair's grown thinner and my glasses thicker, even I've grown less enchanted with my own reflection. So here I stand, a medium market television news photog who's pushing 44. Gimme a minute, will ya? I got to go breathe into a paper sack...

Okay, I'm back. Now, where was I? Oh yeah, teetering on the edge of a corporate stepladder. Honestly, it's a view I'm used to. Why, from way up here I can see the future of TV News and it's a broken, plastic landscape littered with the bones of poor souls like me, who never wised up enough to seek a new horizon. Or maybe that's the past. Truth is, no one knows what local TV news will look like a few years from now. Loyal viewers are dropping like overstuffed houseflies, new gadgets and fewer escudos are taking the team out of team coverage and everywhere you look, people are staring at hand-held screens, chortling at what some neighbor just out on their taco platter. I suppose we gargoyles of the Fourth Estate should continue to squint, cast scary shadows across the land as we fly away, the remains of our once beloved institution crumbling under our stony claws. Well, as my esteemed Father would say, "piss on that."

Honestly, I'm optimistic about the future of TV News. Sure, it's about to shrink, ripple, and remold itself into something new, but can you name another industry more overripe for reform? I can't, but then again, my eyes are a little off from staring at life through a tube all these many moons. But new bifocals aside, I'd say my vision's pretty clear. And what I see is a whole lot less people. Already, studios and newsrooms have found ways to do without half their staffs. There's more (or less) where that came from, for sure. And while I only wish joblessness on a precious few, no one can say they haven't been warned. Really, it's been in all the trades, not to mention that new thing the kids call the internet. Fewer producers, smaller anchor teams, less techies underfoot... it's all a bit of a drag. Unless of course you're a competent shooter who can write, edit, shuck and jive. Then you might be tempted to think the future is kind of bright, for once we get rid of the pretty people and pretenders, all that's left will be the likes of ME.

Take a moment to let that soak in. Feel free to lunge for the remote if you must.

Just don't get me wrong. I'm not celebrating the extinction of long-held jobs. Nor am I predicting any of this will make for a better viewing experience there at home. Quite the opposite, actually, for over the next five to ten years, broadcast news is going to get even uglier than it is today. But it's my utmost hope and half-held belief that whatever form local television news takes, it will be grittier, harder to watch, finally free of most of its hokum. I for one can't wait, for if local TV news stayed the same, I'd be even less inclined to show my lifer card in public. As it is, I'm still a bit hesitant. Too many talented people have let the fold already. Perhaps if I had more exciting options, I'd consider it too. As it is, I'm stuck under glass, biding my time, watching and waiting in hopes new opportunities will crop up before I resign myself to pumping out reruns. Am I kidding myself? Perhaps, but nowhere near as much as the spunky new reporter chick who's counting on a posse of underlings to do her heavy lifting. Who knows, I might even get out from behind this van...

Probably not, though.
Posted by Lenslinger at 10:12 PM 3 comments:

Legends of the Scrum 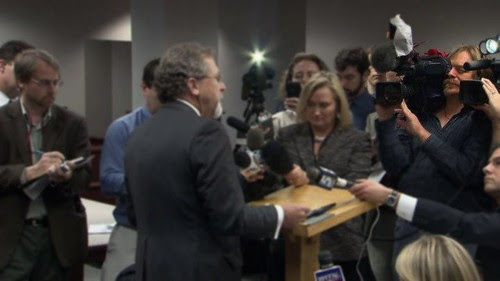 Attention Rookies: Beware the dude looking totally chill in the middle of a shit-storm. He's about to block your shot. It's nothing personal. He's just been here before. He knows the podium and the players, his sat truck is perfectly parked just outside the door and he already knows what he's having for lunch. Don't hate him. He used to be you. But the rub of ten thousand newscasts has left him more than sore. It's left him strangely centered, gifted with a sense of Zen so implacable you'd be ill-advised to jack with it. Give him room. Know that he's made every mistake in the book, including a few he invented himself. So do yourself a favor. Be nice. He'll be nice back, for if decades of dealing with drifters, incumbents and news directors has taught him anything, it's that you don't HAVE to be an asshole just because you can.

Oh, and remember this: his time is more precious than yours. The suits know full well the powers he's honed. They expect him to bend space and twist time without getting his mullet in an uproar. If he came in one day able to levitate, his bosses would shrug, say it's about time and immediately assign him a three part series on Teaching Anchors to Fly. He'd do it too - not because he believes in the project, but because he refuses to put anything but his best on the air. How else could he stay so smitten with such a limited field of view? Don't answer, plebe. Just know that with enough fortitude, time and grit, you too can emit the vibe of a lifer.

Who knows, you could even rock one of those Three Musketeer mustaches the ladies love so much.
Posted by Lenslinger at 8:54 PM 3 comments:

Cecil and The Beast 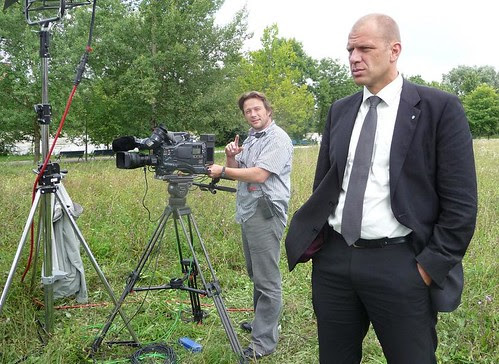 With TV news crews increasingly coming under attack, a few shooters are taking matters into their own calloused hands. Take Cecil, for instance. Dude got himself a bodyguard. And not some ex-bouncer oaf either, but a straight-up Eastern European killa. I first saw the guy outside the courthouse, smoking a clove cigarette next to Cecil's live truck. None if us camera schlubs thought much if it - until Vinnie walked over to bum a nine volt. Man in Black bent his fingers back. Now everyone's afraid to so much as brush up against Cecil in the scrum, lest his new bestie gouge a fella's focus out. A stringer I know swears he saw the same guy working security every time The Scorpions blow through the coliseum. Says his name is Vlad and that he smells like cabbage. All I know is my pal's new goon is killin' the vibe down by the crime tape. I can't even remember the last we all swapped war stories, traded stroke tapes or even hazed a newbie. Funny thing is, Cecil's a real pussycat. No one can figure out why he's blowing his own coin on a heavy. Hmmm. Maybe he got jacked by some elementary kids at one of those career days shoots. 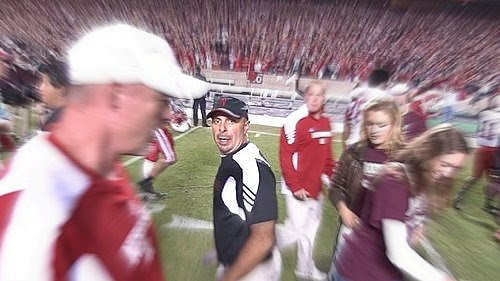 Audio be damned, I'm calling this one on looks alone. I mean, really, get a load of this guy! The beady eyes, the glowering scowl, that overly bowed-up posture... who wants to bet he's got a shiny Corvette waiting for him in the parking lot? But that's not fair... I don't even know the dude. Until now. For when Nebraska Defensive Coordinator Carl Pelini honed in on TexAgs.com photog Brandon Jones, he clearly appeared on the Lenslinger Institute's internal radar and earned himself the right to be called a Schmuck on and off the field. Even if the evidence isn't entirely conclusive...

It happened Saturday, moments after Texas A&M handed Nebraska their cornhusked ass. The score was 9-6, but judging from judging from some folks' reaction, it was a crippling defeat. Not for Brandon Jones, though. He took to the field with a fancycam of sorts. As co-owner of TexAgs.com, he was out to capture all the post-game action for his website. Boy, did he! No sonner had he made it about mid-field, Jones captured footage of little man Carl Pelini seemingly berating a man. I say 'seemingly' because Mr. Jones neglected to attach the microphone before running onto the field. Thus, everything he recorded from then on out was devoid of noise. Silent. Nada audio. Hey, it happens.

What followed is a classic case of pantomimed testosterone. Little Carl notices the opponent's camera pointing his way. Turning on the proverbial dime, the Defensive Coordinator makes a bee-line for the lens, with straight up offense in his eyes. At this point, cameraman Jones makes another tactical error: He lowers the camera to his side. Thus, the alleged attack was not properly documented. All we see is a jostling as the frame goes out of focus. According to Jones, though, what happened next was clearly uncool.

“There’s this awkward moment where we’re eye-to-eye with each other,” Jones told me. “And I say, ‘What are you doing?’
It was then Jones claimed the diminutive coach tried to wrestle the camera from his grip. Not able to best the absent-minded cameraman, Lil Carl then breaks the eyepiece in several pieces, throws them into the surrounding crowd and storms off (no doubt to berate the nearest waterboy for some imagined slight). The viedo - while strikingly quiet - is avail;able on the web in glorious slow-mo.

I've watched it several times now and have come away rather convinced it happened just the way Brandon Jones said it did. There's simply no other explanation. Neither is there any good reason for an almost fully-grown man in a polyester uniform to act like such a child. A pox on you, Carl Pelini. You took a simple loss on the gridiron and turned it into a showcase of your own shortcomings. Is that what you teach all those corn-fed youth? No wonder you lost.