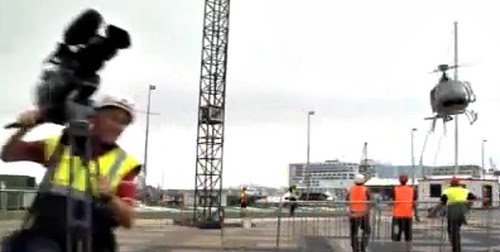 If you're like me, you've watched the mid-air dismantling of that New Zealand helicopter about a dozen hundred times now. Then again, maybe you're not as into ogling found footage as I. Odd, that... Anyway, let's review: It happened on the Auckland waterfront as workers and journalists watched a helicopter hoisting portions of a fiber optic framing. It was "probably the simplest lift we had ever done", according to pilot Greg Gribble. But shit got complicated quick when a main rotor blade apparently struck a wire, triggering a seizure of sorts. In the space of three seconds the unwieldy bird shimmies, sheds its tail and flips. Rivets unravel and turbines scream as the B2 Squirrel Eurocopter proceeds to come undone. Strapped in and stunned, pilot Greg Gribble goes along for the ride, not remembering much when asked about the impact later. Long before the dust settled, workers rushed the downed chopper, pulled out the pilot and counted hardhats before realizing everyone had survived.

But that's not what I logged in to talk about.

Rather, I'm interested in the unforgiving rub of happenstance, that roll of the newsroom dice that determines if the next mad dash will be mine. You follow? If, say, a fellow photog gets caught up in some groundbreaking swell and can't make his very next mission ... that particular foray could fall to on me. Or suppose a body pops up in founder's fountain and I'm foolish to answer the phone? Next thing I know I'm down there bobbing for hobos as a once distant and reserved edit bay gets all loose with some other shooter. Of course, it ain't all about me. Strike that. Of course it is! Isn't your life about you? From my tripod spot, life occurs slightly off center. That's the way I like it, mind you. I'm quite pleased to be perched on the periphery, provided karma and a news car took me there, not some convoluted set of missteps that sends me stumbling in front of a homicidal ostrich, free falling wrecking ball or some citizen turned media critic.

But I digress. Back to the crash scene...

No more than five seconds before the chopper's blade caught the cable, an unidentified cameraman grabs his rig by the shoulders and hustles it a few feet away. It was a fortuitous move, for even before he fully replanted his sticks, said vessel began shedding metal. Chunks of the chopper were found hundred meters away and while its impossible to say whether Auckland's finest photog would have absorbed that shrapnel had he stayed put, speculating on such a thing is the very lifeblood of this blog. Sooo, did our hero count himself lucky for dodging hot projectiles? Or does he still rue the day he turned away just as God dropped his best eggbeater? I hope not, for a camera(man) can go crazy focusing on the past. Me, I can't remember everything I shot last week, though I can close my eyes and feel the blast of an angry ocean from damn near two decades back.

A Job To Do 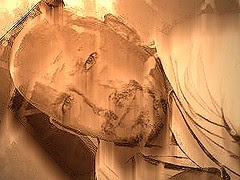 On this Thanksgiving Day, I'm grateful that my old friend Rick Portier is writing again. Then again, I suspect the artist formerly known as Turdpolisher never stopped writing - he simply stopped sharing as much. But when personal loss collides with professional pride, you just gotta get if your chest. That's exactly what the Louisiana lenslinger does below and the result is a few potent paragraphs that should stick to the roof of your subconscious long after the tryptophan wears off...


I hadn’t seen Tim in six months. It was at a graduation party. As always, he was loud and brash, and after making enough small-talk about the kids, football, and politics, I looked for an opening to ditch him. It’s not like we were fishing buddies or anything. We bought a house from Tim and his wife Natalie fourteen years ago. His old neighbors became our new neighbors, and by default, we began running in the same social circles. Tim, a bear of a man with salt-and-pepper hair and a Chicago accent, liked being the center of attention, Natalie, shied away from the gossip at the women's table and looked after their kids.

I had just set my camera on its tripod. It wasn’t the kind of street corner that usually attracts news crews. Ranch-style homes with freshly manicured lawns awaited guests for Thanksgiving dinner. Neighbors huddled in their doorways and kept to themselves occasionally pointing at the interloper with the lens pointed at the house across the street.

“Show some respect, will ya?” The voice blasted through an open car window.

I guess it’s a normal reaction when vultures perch on the street sign outside your home. I learned a long time ago not to argue the first amendment with grieving son. “I’ll try. But I’ve got a job to do.” I’m sure the expression on my face and the tone of my voice weren’t exactly comforting. This was my second murder scene of the day, and it was barely noon.

He sped away disgusted, and I was happy to see him go.

I kept my distance from the family as I always do in situations like this. They had enough to contend with without a hack with a telephoto lens exposing their every raw nerve to the entire region. But I did my job. A wide shot of the house circled by a thin yellow ribbon, Crime Scene DO NOT ENTER. A medium shot of deputies clustered near the garage. A crime scene technician snapping on latex gloves.

Family members clung to one another behind a beat-up van. I spun my camera at them and kept the shot wide and tried to pretend I wasn't looking at them. I told myself it was better than zooming in on a private moment. I still didn’t know what was happening, but scanner chatter told me there were two bodies inside.

Any anchor worth his can of AquaNet could whore this up in to a lead story, so I sat and waited for a captain who could give me the details. After a few minutes, the captain stepped out of the house, her face sickly and pale. She stepped before the camera, notepad in hand. She prattled through the details: time of the call, time of arrival, two dead inside – husband and wife. And names.

My knees buckled. “Whoa-whoa-whoa!” I couldn’t breathe. I stepped away from my camera and paced back and forth while the other crews on the scene just stared at me. I shook my head, tried to breathe, and stepped back behind my camera. I had a job to do.

The captain continued. “It looks like Natalie asked Tim for a divorce, and he shot her in the chest, then turned the gun on himself.”

I did what I had been taught. I called the desk and asked to be removed from the story. It would be forty-five minutes before another crew could relieve me. I aimed my lens at the front door and waited for the bodies to roll out, all the while making excuses: "It's not like we were super-close." "I always knew something was wrong between them." "Better for the family that it's me and not another crew that wouldn't keep its distance." But I did my job.

When does a story cease to be a story and become someone’s life? It’s a question I came to grips with early on in my career.

Today, all I can think about is when did it become a job.

Posted by Lenslinger at 9:23 AM No comments:

Riders on the Storm 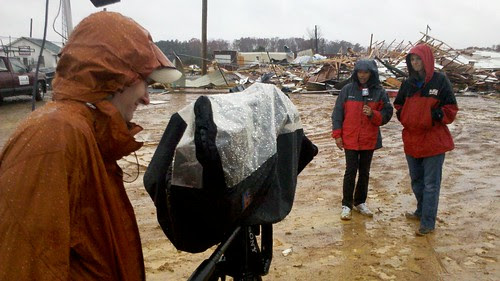 Plunder the rubble of fresh calamity and you won't find any answers. Just ask anyone who's watched a widow pick through her broken home or seen a senior citizen call a soggy cot home for more than a fortnight. No doubt about it, that Mother Nature's a real bitch. Why else would she push a trailer up a tree, toss a car across the yard and make everyone think of freight trains? Don't ask me. I've slept-walked through more debris fields than I can list and the only thing I ever came away with was an appreciation for the absurd. It happened again just last week, as I followed the wake of another tornado and found that I can still be struck by sticks and stones. But I was not alone in my journey of selfish discovery. I had my friends, right there beside me...

You might know them as jackals, carnivorous and loping. In fact, they are a weathered set of action figures who aren't nearly as ditzy or villainous as filmmakers would have you believe. Well, most of us anyway. The fact that we gather in packs probably doesn't help, but when a fickle tempest lays waste to a wide spot in the road, we're gonna crowd the parking lot like stoners jonesing at a Dead show. That's us, stringing lights across still wet wreckage, grilling would-be victim and trying to decide which handful of shattered dream would make for the very best set prop.  No one ever said it was noble, especially those of us with splinters in our minds' eye. That's how I've come to think of the shards of memory that surface whenever familiar vistas pass through my glass.

Call it deja vu, reflected echo or lenslinger's dementia. Fact of the matter is I can free associate other people's darkest days like some soul-eroding parlor trick. There's the stunned youngster from a decade back, searching his parent's property for what he knew to be an immovable object. There's the grizzled war vet picking dishes out of thickets and repeating his poodle's name. There's the grown-up tom boy balling up her fist and turning away, lest her tears end up on the evening news. I can't say I'm haunted by these people, but they pop up in m subconscious at the oddest moments and I find myself hoping I did not do them wrong. It's so hard to know sometimes when you show up like some dreaded specter, scour the vicinity for bits of narrative and vanish before the victims even realize what you've done.

Now go do no harm.
Posted by Lenslinger at 12:13 AM No comments: