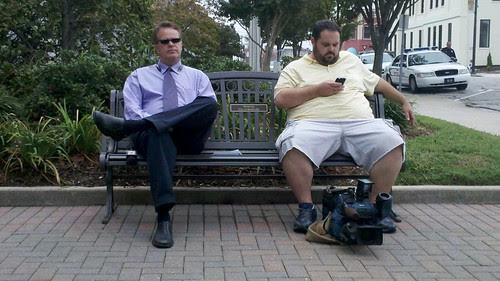 If you believe the promos, we news crews spend all of our time popping out of live trucks, rushing up courthouse steps and, inexorably, pointing. In truth, we sit down on the job quite regularly. Take Bill and Phil. Together (and separately), they live under constant deadline, scrambling from one county to the next in a never ending quest to fill the approaching news-hole. Such was the case last week when I caught up with the pair in Reidsville, where the lot of us were conspiring to elongate the Civil War with less than inflammatory updates on a fallen Confederate soldier statue (l-o-o-o-o-n-g story).

But even feigned controversy doesn't happen without pockets of downtime and as seasoned professionals, Bill and Phil know when to point their news unit toward the horizon and when to chill until the City Manager realizes his path to lunch is clogged with camera crews. That's what's happening here; nothing more nothing less. Note the wireless microphone at Bill's knees, the headphones around his neck, the quizzical look on his face as he notices I'm pointing my Droid at him. Phil, meanwhile, is oblivious to it all; his posture slackened as he closes in on one last angry bird.

Seconds later, this moment of repose dissolved. The City Manager emerged from his office and we jumped on him like the jonesing vultures we are. When the dust settled, I turned to show Bill and Phil this picture, but they were already gone. A day later, I caught up with Bill again, in a different county, with a different shooter, on a different story. Twenty four hours had passed, I'd forgotten about the photo and besides, I had a face full of viewfinder and a desk monkey on my back. That's okay. There'll be another day, another county, another park bench.

Is this how Forrest Gump got started?
Posted by Lenslinger at 7:11 AM No comments: