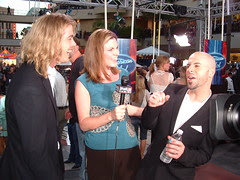 On a lighter note, how about that Chris Daughtry? At last check, his debut CD had gone double-dog platinum, a mean feat for anybody these days - let alone some dude who was scribbling service orders at the local Honda dealership a year or so ago. But that was before American Idol made him a household name - a not always pleasant process we documented in sardonic detail last year here at Lenslinger Central. I have many memories of Chris from that twisted ordeal, but my favorite involves this picture I snapped in Hollywood last May. Some spastic lounge singer by the name of Hicks had just been coronated 2006's American Idol and young Mr. Turbo-Throat couldn't have been giddier. At the time I thought he was just super-stoked to be done with the Great American Cheesefest, but I realize now he was already plotting his world domination - or at least one hell of a run on VH-1's Top Twenty Countdown.

So, why am I bringing all this up now? Other than the fact that any mention of Chris Daughtry sends my site meter spinning? Simple - he'll be here in a week! In a most ambitious attempt to raise its Tourney Town profile, Chris' alleged hometown is hosting one mother of a free concert, smack-dab in downtown Greensboro. Having stolen a peek at the set-up and the plans, I hereby predict incredible success or ab-so-lute bedlam. Either way, it'll be a Friday night to remember as South Elm Street explodes with Soccer Moms, crackpipe owners and a host of poseurs in black sequined peacocks t-shirts. Best(?) of all, I'll be there - shooting Chris, the crowd and avoiding any impromptu beer-showers that might come my way. Who knows how much of the show I'll actually see, but I do hope to witness the mob's reaction to a video I'm putting together for the montage intro on the JumboTron. But don't feel left out if you choose not to attend (trust me - choose not to attend!), I hope to post clear photos and blurry impressions of the inevitable melee.

Until then, I'll be practicing my Metal God falsetto, should the recalcitrant rocker decide to skip town at the last moment. Can't say I'd blame him...

Check out my UPDATE!
Posted by Lenslinger at 8:08 PM 8 comments:

No sooner had I pinned my microphone on the park ranger than he whipped out that damn hat. You know - the kind Sergeant Carter wore in those priceless old Gomer Pyle episodes? These days, you usually see these face-light deprivers wedged on the heads of robotic State Troopers, equatorial brims cloaking their every expression in official silhouette. That may match the Sergio Leone movie playing inside your head, Ociffer - but in looks damn silly on the evening news. Still, the Highway Patrol must like it, since they apparently train every recruit to jam it down to their earlobes at the first sight of an approaching TV camera.

But today’s Smokey Bear headwear encounter didn’t for once involve twisted sheet metal. Instead of clinging to a ditch-bank while a highwayman waxes pragmatic, I was gathering sleepy soundbite on a copperhead scare at the Military Park. Not one to intentionally put crap on-the-air, I fiddled with my sticks until my hefty-cam was perched oh so precariously high. Reaching up, I stabilized my shot (and my piece of high-dollar gear I’d willingly catch with my face) until three quarters of the uniformed historian’s weathered face was appropriately sunlit. As unfocused squirrels frolicked in the background, I asked my first question secretly proud I’d conquered the elements for all of what would be an eight second shot.

That’s when the air-conditioning unit outside the Visitor’s Center kicked on, obliterating most of whatever Ranger Bear said.
Posted by Lenslinger at 7:46 PM No comments:

We Interrupt This Delay... 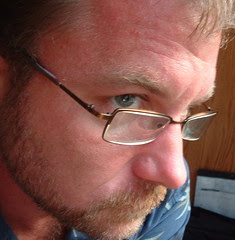 Forgive me dear reader, for I have fallen a bit behind on the blog as of late. I could blame my kids; those two have an itinerary that would out-flank most Secret Service agents. The only way I can keep up with them is to run beside the car and yell instructions into my sleeve, which oddly enough the pre-teen set finds embarassing. I've also been immersed in an off-line project: the assembly and tweakage of my long-delayed self-published anthology. I'd like to report great progress, but then I really would be delving into the world of fiction. Lastly, I've spent w-a-y too much time debating the state of on-line video with the Ornery Ink Brigade. Vitriol aside, I think we're making progress, but - should I go missing - check the dumpster behind every local newspaper in America. Avenge Me!
Posted by Lenslinger at 7:18 AM No comments: