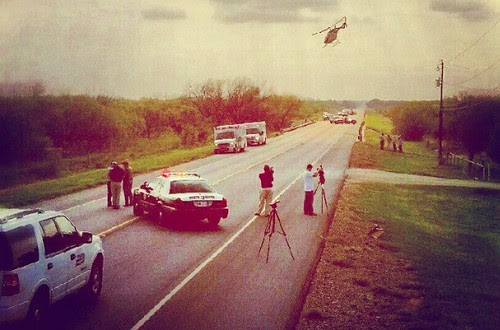 If you've ever wanted to delay an emergency medical airlift until the light is j-u-s-t right, you may very well be a photog.

If you've ever sat in the corner of a late-day committee meeting and prayed for a pistol-grip and/or the apocalypse, you may very well be a photog.

If you've ever bitched about how long a lake dredging takes, you may very well be a photog.

If you've ever fractured the time-space continuum so video of a lone road sign could grace the screens of a million living rooms, you may very well be a photog.

If you've ever cursed the darkness of a crashing laptop while helicopter spotlights danced over a nearby debris field, you may very well be a photog.

If you've ever turned a jumble of screenshots into something safe for consumption all while choking on the taste of hairspray, you may very well be a photog.

If you've ever watched handheld footage of a unicorn being born and thought "I could do better', you may very well be a photog.

If you've ever grimaced at the sight of a fat shaft of daylight flooding through a conference room window, you may very well be a photog.

If you've ever watched red blotches form on a lunch lady's neck as she told your tube how tasty Tater-Tots are, you may very well be a photog.

If you've made it to the end of this insipid list without glancing at the stack of head-shots you keep on hand for passing fans, you may very well be a photog.

Don't worry, though. Modern medical science is improving all the time.

(Many thanks to Jake VanDonge for the inspiring Instagram!)
Posted by Lenslinger at 10:58 PM 3 comments:

There Are Worse Things I Could Do… 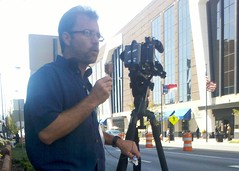 Unlicensed gynecologist Todd Akin may be an expert on ‘legitimate’ rape, but me, all I know is television. Local television, to be exact, the kind your parents used to plan their meals around. These days, the newscast that once mesmerized millions is losing viewers, shedding relevancy and circling the drain of mainstream media. Why, it’s enough to make a wordy camera nerd look around for other ways to spend his days! But what on God’s half-paved Earth could a guy who’s dedicated his life to late-breaking updates do in a world without live shots? I can think of but a few…

TSA AGENT - I’m not much for rifling through suitcases, but I can profile me some peoples! Twenty years of panhandling for soundbites in Wal-Mart parking lots can do that to a fellow. Hell, I’ll even wear the goofy uniform! As long as I get to hang by the metal detector and groove on the crush. THERE - that chick with the dreadlocks, overcoat and crippling twitch…let her through. But HIM - with the shiny suit and flag pin on his lapel. Looks like a County Commissioner or somethin’. You know what that means… Cavity Search!

PRO BOWLER - Sure, the last time I hit the lanes, a guy named Whitey was leaving town, but that doesn’t mean I can’t pummel the pins from a respectable distance. Okay I got as much business bowling as a leper selling Avon, but Dammit, I’m willing to learn! Already I got bad taste in shoes, an affinity for air conditioning, an endless thirst for bottomless nacho platters and more tacky, polyester shirts than Charlie Sheen’s old dressing room. Don’t believe me? BAM!

DIPLOMAT - Okay, so geography ain’t my strong suit, but two decades of abiding nonsense in the name of news has dulled my tongue and sharpened my senses. Why, within the course of a single workday I can corner a Coroner, salute a captain of industry and bum-rush a junkie - without ever letting either of them know I think they're complete douche-bags. Just don’t ask me to consort with consultants. A (camera)man’s got to know his limitations.

RESTAURANT CRITIC - With a deep vocabulary and shallow gag-reflex, I’m a shoo-in for a ‘mystery diner’ gig. Already I can identify seventy-six restaurant chains by their building silhouettes alone. I’m also well-versed in greasy spoon etiquette, metaphor mangling and the fine art of drinking straw spitballs. Give me a few weeks and I’ll even brush up on higher end dining. Why, just the other day, I hoarked down an entire Taco Supreme value meal while camped out in the back of a satellite truck. Some dill-weed photog mistook my Big Gulp for a spit cup so I washed down my South of the border order with a nice Chianti. FFFTTT-FFFTTT-FFFTTT!

SECURITY GUARD - Some might call it poetic justice that a TV News cameraman end up working as a rent-a-cop. But look past the irony! With my insider knowledge, lackadaisical gait and thousand yard glare, I’d be THE perfect person to guard your food court. (Kind of like when the CIA hires a master safecracker to pull a bank job. Or is that just in those silly Oceans 11 movies?) I’m even willing to go deep undercover, dive through dumpsters and subsist on nothing but old granola, cold coffee and No-Doze. How do you think we news crews get through hurricanes?

Soo, there you have it…just a handful of career paths I’ll consider should the wheels come off my favorite affiliate. But would any other job be as fulfilling as propping up correspondents? Baby-sitting train wrecks? Interviewing degenerates?