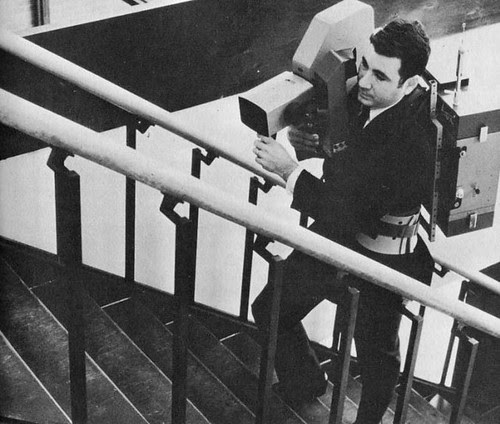 This is either a publicity still from a Twilight Zone episode I've never seen or it's a rare photo of a Plumbicon "Creepie-Peepie" - an early 'mini-cam' thought to be responsible for more bulging discs than any other recording device of its day. Capable of transmitting pictures without a cable, this truly was a futuristic rig, albeit one with a hideous nickname. (Creepie-Peepie? Who names your cameras? Paul Lynde?) Of course with fifty pounds of sharp edges and hot coils strapped to your back, 'creeping' is about all you're gonna do. That battery girdle alone would slow down most men; it'd got enough chafing power to drop a Navy Seal. I just hope no spot news break out. Otherwise Sherman here's gonna tip over, trigger the jetpack rockets or rips the shit out of Rod Serling's suit...

You're traveling through another dimension, a dimension not only of sight and sound but of incredible lower back pain; a middle ground between key-light and shadow, live shot and deadline, journalism and hernia. There's a stairwell up ahead, a staggered vortex where only man's imagination - and core body strength - limits his visit to another dimension... Next stop - well, you get the idea.

Thanks as always, Amanda Emily.
Posted by Lenslinger at 7:13 PM 2 comments: 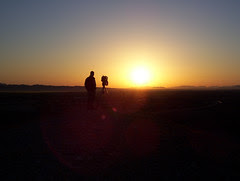 See, the thing about shooting TV news is, there's never any closure. You can crank out ninety second epics until your lens goes limp and know about the only thing you've done is prop up a bunch of Viagra commercials. Don't get me wrong: I like my job! But if a feeling of satisfaction ever lasted for more than four hours, I'd do more than call my Doctor. I'd run outside and make sure there were still call letters on the wall. Maybe then I'd know if the alternate universe I somehow stumbled into still offered a bi-weekly stipend, for that and a shelf full of chrome-plated figurines can buy you about ten minutes of respect in this business. But I'm not complaining! I'm simply coming to terms (again) with what I have to look forward to, should that whole pampered gadfly thing never work out. I'm guessing it won't - and while the idea of a slower, balder, fatter me dozing off at ribbon-cuttings makes my current temples throb - I gotta get a handle on where this, ahem, 'career' isn't taking me.

It's different in the beginning. At least it was for me. In my early twenties and courting failure, I took to the not so noble pursuit of slingin' lenses with evangelical zeal. Back then, there was nothing I wouldn't do in the name of news. Wanna drop me into a prison yard with antique gear and a red-hot intern? I'm game! Need someone to grab fresh sound at the horsefly convention? Giddy-Up! Everyone else refusing to follow those beekeeper-preachers into the hood? I'M your huckleberry... Yes, for me the Dawn of the Nineties was a time of self-discovery. Who knew my lead-foot, attention deficit disorder and cat-like reflexes could provide me with a lifetime of wrinkled press-passes and floorboard ketchup packets? (Well, there was that one guy in the dingy fishing vest, but HE won't talkin'). No doubt about it, learning about life through a logo'd tube was a mind-beding way to spend my Twenties... At (nearly) 43, not so much.

Is that because I'm wiser? Wider? Whinier? Perhaps. But part of why I no longer hold any illusions when it comes to news is the vacuous nature of broadcasting itself. Simply put, it pays NOT to pay attention. That way you won't notice you've been repeating yourself since the Clinton Administration. It won't bother you that all your blood, sweat and fears fade into the ether quicker than a golf course fart. Hell, you won't even mind that the intern you once taught to edit now decides how you'll spend your day. Denial ... beats a lobotomy! Maybe I'd feel different about my chosen field were there more opportunities for advancement, instead of a corporate stepladder covered in gaffer's tape and tobacco spit. Probably not though... Now for the disclaimer: I really do dig what I do (in theory). The days I work alone I'm in nothing less than a trance and I go home on those evenings grateful to have used my limited skills for good instead of evil. The only real question is: Will I one day look up from my wheelchair at the Old Photog's Home and regret wearing the stripes of a lifer?

Glass at the Impasse 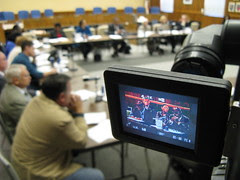 Of all the places my fancycam has dragged me, perhaps the most perilous is the governmental meeting. Sure, there's more danger down at the Sheriff's sally port, what with all those shackled crackheads and bad cop mustaches. And the highway can be hazardous when you're passing gas in the breakdown lane. And don't get me started on the zoo! That alligator may be hibernating but he's probably dreaming of cameraman crotch. But of all those exotic locales, nothing strikes dread in this 'slinger's spleen more than the fluorescent confines of a county owned conference room. Which is why today's assignment was so very dire, as I perched above a room full of constipated wonks and waited for the shite to take flight...

It. Never did. Oh, there was tension. You can't trap this many overdressed politicos in an enclosed space without kick-starting the drama-thon. I mean, these are important people! They've got tailors and constituents, preferred parking and a DVR bursting with their favorite newscast cameos. Most of them even mean well! They can't help it if the come across as third rate James Bond villains. It comes with the scenery (which, incidentally, usually includes some cameraman or another muttering about housecats, batteries and traffic). But for all the ill will generated by these warring factions, the people of Guilford County should be proud of these less than civil servants... No ultimatums thundered down. Gang-signs did not appear. Why, nary a switchblade was even pulled! That makes for a higher level of discourse, certainly, but it can be damn boring to document...

So I let my mind wander. Like a prison inmate who manages a flower shop in his head, I fired up the synapses just to see where they'd take me. I stared at the ceiling tiles and wondered if they'd hold me, should I seek higher ground. For the longest time I tried to move a nearby paperweight with my mind, but when that didn't work I checked my iPod Touch for the thirteenth time - just in case a wicked cloud of wi-fi passed by... When none did I turned my attention back to my fellow photogs - but they were all embarked on their own catatonic journey. I admired their powers of concentration for a moment before scanning the crowd for any signs of toupee. When no particular rug jumped up to be noticed I began reciting old Rush lyrics - until my fevered falsetto scared the lady from District Six. Finally, I centered myself, stared out the window and wondered if all this inactivity might make for a half-decent blog post...

Told ya it was risky.
Posted by Lenslinger at 9:30 PM 2 comments:

I did not know John Billingsley, but by all accounts the 27 year old Rutherford County native was a funny and enthusiastic member of the news-gathering community. His sudden death in Charlotte this weekend has left his colleagues at WLOS reeling from the loss of someone so young and they've honored John's legacy with the kind of tributes once saved for only anchors. Of those living memorials, my favorite is the one pieced together by his fellow photogs. It speaks not only to the spirit of their young friend but also to the reasons anyone would want such an odd job as ours in the first place. Rest In Peace, John Billingsley.
Posted by Lenslinger at 12:09 AM 5 comments:

Some Settling May Occur... 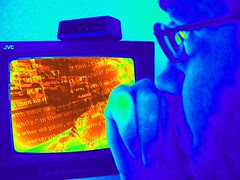 No matter where my fancycam takes me, I spend a good portion of each afternoon locked in a box. Okay, it's officially an 'edit bay' and I'm not even sure you can lock it, but it hardly matters for when your reporter of the moment writes you into a corner, then you Sir or Ma'am are trapped. Throw in a digital clock and a few goofy phone calls and you have the makings of a 24 episode in which Jack Bauer spends the entire time hunched over a candy-colored keyboard. Sound dull? You've never dragged and clicked your way across a still-forming time-line as gaping chasms of black threatened to collapse your very narrative... Why last week they dragged one guy out in a straight-jacket after he overdosed on excruciatingly slow dissolves! Then there was the lady who locked herself in with a bunch of sick celeb obituary scripts and a stack of file tapes. It was six days before they even found her body!

Yes, when it comes to the perils of news-gathering, I'd put the daily edit sesh right up there with the inner city stand-off - not because there's any gun play in those little broadcast closets, but because there's so many other ways to poke your eyes out. Take the underdeveloped but over-imagined documentary piece - you know, the one you got six shots of ketchup packets with which to flesh out a three minute report on climate change! If that won't make you gouge out your cornea, there's always that intern who wants to sit in so he can tell you how he would have cut it on his Dad's iMac. Me, I can stand that particular intruder, but so help me if that reporter insist on hovering over my shoulder so he can orally debate my every slice, I'm gonna commit some kind of journalistic fratricide! A-hem. Sorry to get all worked up like that, but too many people think the edit bay is a bathroom stall or a snack bar or a ballot box in need of stuffing. To those folks, I say LEAVE ME THE HELL ALONE!

Hmm? Was I shouting? A thousand apologies, but I get a little cagey after that kind of extended sequestration. Normally a bag of Funyuns and a lap around the weather center does the trick but today I spent much of my stretch trapped behind a stack of archive tapes. What are those exactly? Oh, just jumbo cassette recordings of every ribbon cutting, ride-along and rape accusation El Ocho has showcased in the last decade or so. Honest to God all I need are a few fleeting shots of Chinese people smoking cigarettes - you know, just the kind of thing a domestic television station collect in abundance. To be fair, I found what I was looking for - or rather Bob Buckley did - but only because I threatened to flesh out his thoughtful treatise on the tobacco trade with leftover sequences from Pee-Wee's Playhouse. That I got reams of, collected from a time when hallucinogenics and randy hand-puppets were thought to be the keys to a more universal understanding of our heartless orb. But I don't want really wanna talk about my senior thesis - I'd much rather discuss how you plan to get us out of the stifling little cube before that bean burrito I had for lunch melts the Windex residue off these TV monitors...