Noyz in the Hood

It was stupefyingly hot on Wednesday so of course I spent it outside. After all it’s part of the Photog Credo: “Neither rain, nor sleet nor oven door heat will stop me from venturing out in the names of news.” Seriously, I covered some spot news in the inner city that felt like a scene from Cool Hand Luke: everyone sitting around trading bromides while glistening in sweat. In this case however, it wasn’t an egg eating contest at the center of attention. It was a gas leak. Not one of those foisted on family members by a flatulent fourteen year old either, but an unauthorized dispersal of natural gas. Seems the copper tubing at the bottom of an abandoned house was too much for the crackheads to ignore, so they shimmied underneath in the middle of the night and made off with the metalwork. One wonders if they smelled the gas as they took apart the tubing. Neighbors surely did. By daybreak, the fumes were overpowering along Bessemer Street. Someone called the PO-leece, who called he fire department, who made so much noise about it on the scanner that a certain grizzled lenslinger was torn away from his morning cup of joe and told to beat feet toot sweet.

If years of violating personal space with a TV camera has taught me anything, it’s how to approach people with a microphone and a smile. Seriously, if I’d been as successful at engaging strangers during my short-lived car selling career, I’d still be pushing Volvos, Jeeps and Beemers. But where I was never all that great at convincing people to drop coin on a pricey ragtop they didn’t need, I’m a certified Closer when it comes to bagging sound. “You there - with the housecoat and lump of snuff in your lip! I know you were forced out of your home at four in the morning, but wouldn’t you like to step in front of my lens and tell the Greater Piedmont Googolplex what it feels like to be displaced by some overly-jonesing yutz with a crescent wrench? No? how about your friend there with the tattooed torso and visible shakes? He looks like a talker!” Okay, so I wasn’t that brazen. More than anything I was nice and nonchalant in that southern kind of way that big city actors never quite master on screen. But I wasn’t just collecting quotes, I was making friends!

I mean that. For every drug-addled young plumber making unauthorized house-calls, there’s half dozen sweet grandmas shaking the heads at the gall of today’s kids. Not ALL of them will talk on camera, but unless you’re a monumental dick a few of them surely will. Of course it helps that whenever a marquee crime lights up the shady side of town, residents pour onto the street with lawn chairs, hand fans and I-told-you-so’s. Gas leak, homicide, alien spaceships on the horizon... it all draws a crowd in the ghetto. And while the very term “ghetto” is probably not politically correct, it’s what the good people I interviewed yesterday called their hood. “Hey Mr. news man! What brings you to the ghetto?” Upon hearing that, I made a beeline for the three hundred pound lady who wanted to know, for one of the first rules of soundbite acquisition is to quiz the curious. Example: you just pulled up to a drive-by shooting scene and while a few felons ducked their herads at your arrival, others are doping backflips to get your attention. Those are the folks you start with, for if a guy’s gonna stand on his buddy’s shoulders and hurl one-liners your way, there’s an excellent chance he’ll climb down ling enough to weigh in on whatever tragedy is at hand. Call it profiling if you will. But, please, let me start rolling first so you can say it on camera. For if I don’t capture it on tape, it never happened and courtroom sketch artists don’t ride along with us news types at midnight. 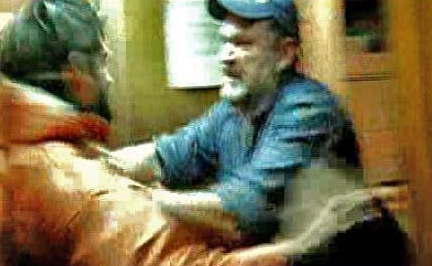 As a raving fan of The Deadliest Catch, I want to like Captain Keith Colburn. He's in business with his brother, takes advice from his adorable little girl and owns a kick-ass crab boat. But time and time again, this skipper had proven himself to be a dill-weed of the highest order. Those who watch the show know what I mean. The only thing more predictable than a shot of some greenhorn deckhand losing his lunch are extended sequences of Captain Keith losing his shit. I suppose it makes for good TV. After all, several (edited) minutes after launching into one of his nearly incoherent tirades, Cap'n Keith can be counted on to repent. Seriously, this guy delivers more sobbing apologies than he does King Crab. And it works! Just when you want to write him off as a psalty psychopath, he says he's sorry, all while reminding everyone within earshot what a tough gig he's got. As a viewer, I've cut him a blank check more times than I can remember. Yeah yeah... killer waves, bad crab, some dude sticking a lens in your face when you're trying to drive... it can't be easy! No matter that all those other captains seem to manage the same thing without berating their crew to the point of mutiny - he's just an emotional guy!

Well, this week a clip from an upcoming show surfaced that has forever erased any slack I may have granted this seafaring putz. In the video, Keith is seen lamenting his fate as a successful businessman when the wheelhouse telephone rings. It's a Discovery Channel cameraman asking for a co-worker. This is apparently against the Wizard's policy, as the commanding officer of said vessel promptly storms below deck to confront the offending lenslinger. What follows is an exercise in absolute gas-baggery. Keith hurls (irrelevant) insults, throws in a few threats for good measure and when the cameraman doesn't back down, frog-marches the two of them from stem to stern before crashing into a distant bulkhead. Even with Keith's history of hissies, it is an embarrassing display of a captain come undone. Of course a crab boat passageway isn't a board room and behavior deemed unacceptable on dry carpet is simply the price of business out to sea. But, Keith, really? Is Discovery putting a little something extra in your check if you promise to go mental every fifteen minutes? I guess it makes up for a lack of crab action, but you're establishing yourself as a villain on a show that really didn't need one.

Worse yet, you came dangerously close to incurring the first ever waterborne Schmuck Alert! Had their been an actual camera in that cameraman's hand, I would have had no choice but to throw the secret switch here at the Lenslinger Institute and bring shame to your entire fishing village. And really, what good is owning your own fishing vessel, appearing regularly on cable TV and starring in your own Sears commercial if much of the nation and every living TV photog considers you an utter tool? Something to think about the next time you're about to 'show your ass' on camera. Just look what it did to David Caruso...
Posted by Lenslinger at 9:02 PM 3 comments: