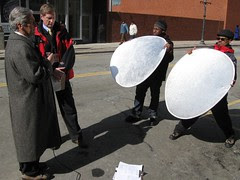 Youthful exuberance: it's powered more local live shots than an acre of camera batteries. I should know; I entered this business young, dumb and full of enthusiasm. Why just being near the antiquated gadgets that populated my first TV station electrified me -- and that was without sticking my tongue on the cart machine's power plug. But as intoxicating as I found my first affiliate's interior, I couldn't wait to get outside. That, I thought, is where the ACTION is. One look down the hall at the fellows with the dusty cameras and the seen-it-all expressions and I knew what I wanted to be: Lenslinger. (Actually it would be years before that name came to me; years after a college kid took a friend of mine hostage and thrust me onto the scene of unplanned calamity.) From there I insinuated myself behind a news kind of lens; one that would take wherever I wanted and a few places I didn't. But they were very few. Yes, back then I'd repeatedly suggest I ride on TOP of the police car if I thought it made for a funkier shot. It often did and I'd rush back to an edit bay with my bounty; eager to chop, slice and stretch the sights and sounds I'd collected in the name of news. It was nothing short of revelation and every two weeks they even paid me! Sort of. 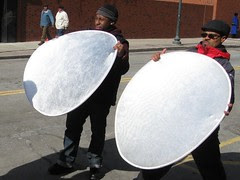 That, of course, was some time ago. In the years that followed I bounced around a bit, shot every kind of news story there was at least twice while pretending to be cynical. And then it took! No longer faking my thousand yard stare, I decided I knew it all and didn't like any of it - all because I'd televised a few midnight drive-by's. In fact I might have become completely unfeeling had I not fathered two girls. See, driveway hugs and playroom Barbie towns will soften even the crustiest of cameramen. Eventually, I came around and while being a Dad didn't make my job any easier, it sure as hell put it into perspective. No longer jazzed over the cop-shop beat, I followed my instincts and Kuralt-like aspirations into the back half of the newscasts. There I could be creative and alone, unfettered by toothy reporters and glowering deputies. What followed was a decade or so of B-Block fodder and when I looked up from my umpteenth Easter Egg epic, it struck me I was no longer cool. 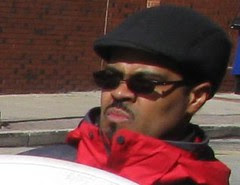 These days, I'm counted among the elders - a not so washed-up used-to-be, age 43. That's 106 in photog years - dead to you and me. And while I'm not yet ready for that pine box out back I readily admit I'm not the immortal lenslinger of newscasts past... I'm that dude who'd just as soon be left alone... I promise my package will be among the best in your show - if only you get the eff out my way....So why am I dredging this up again? Simple. I glimpsed the guy I used to be outside the Civil Rights Museum the other day. His name is Brian White and I pass him in the halls. But the other day, this production assistant joined us out in the open for a full day's clot of gratuitous live shots. His help was needed and we greatly appreciate it. But what I've come to savor the most was the random snapshot Weaver took around lunchtime, for the determined satisfaction on young Brian's face as he manned a reflector took me back to a simpler time, when every live shot felt like a shuttle launch, cell phones came with their own leather shoebox and all-knowing anchors burped the word of God...

Pace yourself, kid.
Posted by Lenslinger at 9:52 PM 1 comment:

Our Man in Miami 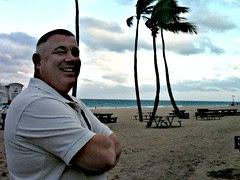 While I wade through week old snow here in the Piedmont, 'Colonel' Ken Corn is sticking his toes into the sands of South Beach. Okay, so mostly the Charlotte photog is stuck in a sat truck; one of the many mobile newsrooms currently camped out around Miami. Seems there's some sort of religious event involving pig's skin down there this weekend and the good Colonel's got orders to report on its many sycophants. Of those, there are plenty. Athletes, gasbags, flunkies and pundits - all converging on a city not known for its subtleties for a celebration so staged, so garish, so deeply American it can only be called 'Super'. But it's not all fun and games for the embedded journamalists. First, there's there's the not so wintry weather...

Well, I got one word that will strike fear into every photog’s heart, HUMIDITY. Yea, it wreaked havoc on me today. The first time I fired up the tape machines in my satellite truck this morning, they refused to work. Both editors gave me an ERROR-1 HUMIDITY. I had to run the A/C for an hour with the decks open before they would cut tape. Next was the blasted camera. Because I ran the A/C so hard, when I took my camera out for a live shot, it rolled over and died. The lens is full of fog and the tape will not roll. I got it to do the live shot, but other than that, it’s just a fancy boat anchor. So I had to have the A/C cranked for the decks, but it screwed my camera. I can’t win. I should put my camera in the cab of the truck from now on to keep it acclimated. Speaking of the satellite truck, well, without getting too technical, let’s just say I had a few problems there as well. But, all my shots made air, even if one of them was the wrong aspect ratio. Isn’t everyone 16 x 9 now? I thought the sports guy looked like he lost a lot of weight.

Weather and technology notwithstanding, there's a chance to kibitz with the rich and gifted during Media Week - provided you make your 18 daily deadlines...

Media types like me get to mingle with the players. Some players have their own booth as if they are on display at a convention or something. The “lesser known players” (yea, I heard a reporter actually call them that in a live shot) just walk around hoping for a cameraman to stick his glass in their face. So, did I get to meet Payton or Drew? No. I was out in the parking lot setting up the satellite truck. Truck operators don’t actually get to participate in the events they cover. Instead of hob-knobbing with famous NFL stars, I walked over to the Wal-Mart next door and found a killer deal on Hawaiian shirts. Slinger will be proud of the orange shirt with yellow flowers I picked up for eight bucks!

Proud I am, Colonel - if only because I know you'll still be wearing it the next time we break bread in the path of a hurricane. For now, though tell me 'bout those hot Miami nights...

Also, I’ve got to tell you about the Media Party the NFL put on out at Miami Beach (also a city not part of the metropolitan area of Miami) late in the evening. The party was on the beach! They had a live band with dancers dressed up like cheerleaders. They provided free food and free booze. The NFL puts on a kicking party. The dancers/cheerleaders started a line dance and we all joined in. Later, I saw my co-workers walking away from the bar with a beer in each hand and two more tucked up under their arm pits. Yee Haw!

I'm sure what the colonel meant to say was that he and his fellow professionals will continue crafting coverage of this blessed event into the wee hours of the evening, whereupon they'll pause for quiet reflection before turning in feeling old, sober and alone. After all, this isn't some silly game they're down there covering...

(Click here for Colonel Ken Corn's complete debriefing of Media Week in Miami. And know that Florida is bursting at the borders with photogs and sports dorks. Our very own Chris Weaver just rolled up in Daytona and will soon file reports from the cradle of Nascar civilization. Me - I'll be at home waxing my snow shovel...)

Posted by Lenslinger at 3:33 PM No comments: 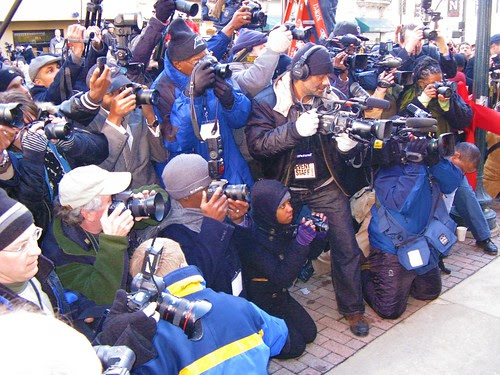 Whew! Here I was wondering how I was gonna describe what it was like to cover the opening of the International Civil Rights Museum and damn if I didn't capture the feeling in a single frame. How'd that happen? Oh yeah, I clubbed an old lady in the face to protect my portion of the swarm. Okay, not really - but had this long-awaited ribbon cutting lasted more than twelve seconds, Granny would have gone DOWN. Scrums are dumb that way. One moment you're leaning against a tripod spreading lies and the next you're planting an elbow in the chest of your closest competitor. Take the above photo for example: half a minute before I snapped it these combatants were engaged in idle chit-chat. But let Jesse Jackson and pals grab a pair of giant scissors and shit goes all slow-mo like those scenes from The Matrix. I myself was holding up a wall across the street when I saw the distant nucleus form. With the kind of fluid motion reserved only for 43 year olds, I lunged toward the doorway - just as hundreds of spectators did the same. It was only my sensible shoes and utter lack of shame that enabled me to get within arms' length of the history being made outside the old Woolworth's building.... 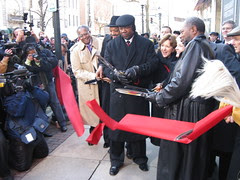 As fascinating as the sight of grown men hacking away at a red ribbon is, my eye was drawn to the rabid pack of lenses to my immediate left. Though I knew many faces in the crowd, their identities blurred as they formed an impenetrable wall. That's when the good folk behind me decided no damn cameraman was block their entrance to the new museum. What followed was a flurry of flashes and press passes, thanks to some caffeinated activists, six saints in the making and a few confirmed assholes. Luckily I was able to hold my ground, but only because I learned how to mosh in Hollywood - where grown women willed themselves into seizures every time Simon Cowell passed gas (which was often!). Yes, compared to an American Idol audition, today's collision of lenses and citizens was incredibly chill - and it featured a lot less body glitter! 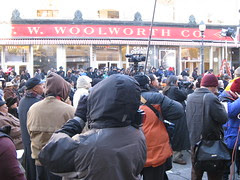 Me - I'm just glad it's over. The International Civil Rights Museum - located in the very same five and dime where four black college kids changed the world by demanding service and respect - is long overdue. Regional media outlets have been planning for months how best to cover today's dedication. Most went with total team smotherage - as a result I saw a lot of friends today. And though I never did get to go inside the museum, I hope to do so soon in the company of my kids - preferably on a day I don't have to body-check some senior citizen to get near the door. Now, that would be civil!
Posted by Lenslinger at 9:16 PM 2 comments: