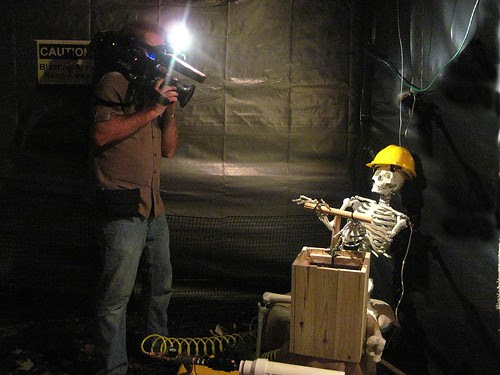 ...Other times it's a twisted adventure. Even when it's somewhere in between, it's a deep enough kick to prevent me from taking up something more noble - like taxidermy. Actually, after two decades of climbing the corporate foot-stool that is local television, I can honestly say I'm as close to content as someone as melancholy as me can be. Trouble is, my children are starting to figure out what Daddy really does for a living. Just last week, my oldest daughter accompanied me to a homespun haunted house and popped off a few shots of Dad in action. I appreciate it, but after watching me shuck and jive my way through a rather feeble feature, she''ll never again buy that line about me being a stockbroker.

I just hope she'll break it easy to her sister...
Posted by Lenslinger at 8:50 AM No comments:

Contrary to what my neighbors think, I don't hang on my station's every update. Fact is, I watch precious little local news, a habit I picked up from my children back when their idea of a good time centered around a bucket full of Barbies. These days, I'm far more apt to crack open a hardback than willingly flip over and see what the hair-do's are sellin'. It's not that I don't wanna stay informed. But at almost 44 years of age, I got but so much cranium space to devote to jokers I don't know. Besides, as a practicing cameramanthropologist, I don't have time to keep up with each and every outrage. Not when I'm a phone call away from thethickofit.

"Hey guy, know that lady they say mowed down that cop? No? Well, she's scheduled to exit a courthouse door in thirty minutes. Be there."

Okay, so maybe that's NOT how Texas news shooter Michael Humphries ended up dead center in this photograph by Helen L. Montoya of the San Antonio Express-News. For all I know, he's absorbed every detail surrounding alleged drunk driver Sandra Coy Briggs. Or maybe he's like me and lives a full life without ingesting pixelated chit-chat. That way, he was unburdened with needling details and just joined in for the love of the hunt. Hmmm? What's that?

Maybe so, Mr. Humphries, but it didn't stop you from nailing the subject at hand. See, I've studied the resulting report and it has all the markings of a professional hit. The way you navigated that narrow walkway, flipped your filter wheel every time the light source changed and avoided taking out the radio guy with his over-sized microphone flag and electric blue i-Thingie. Not to mention your positioning! Pivot, spin or parry, you found a way to be where the camera demanded and as a result you bagged the perpetrator's dirtiest of looks! Hey, that's not just a felonious scowl; it's the kind of facial expression that launches a dozen updates. So while you may harbor a distaste for the chase, you didn't let it stop you from bagging your limit -- and you did it all with the kind of facial expression most often found on the faces of seasoned correctional officers. The mark of a pro, indeed.

Now if you'll excuse me, the guy who lives beside me wants to talk about the local moratorium on anteater farms and I gotta find a way to tell him I don't even know what that means...
Posted by Lenslinger at 8:25 PM 1 comment: 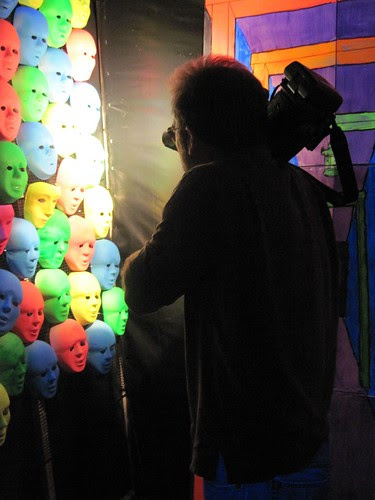 You meet a lot of people in my business. Reprobates, scholars, rock stars. But the encounters are forced or fleeting; there's never time to know the soul behind the soundbite. After awhile, you kind of lose track. That's when the countenances blur; the victors and the vanquished all meld into one creepy set of features that haunt the one inch screen hovering over your mind's eye. Pretty soon, you cease to care as the faces keep coming at an infuriating clip. Before you now it, your stumbling through some ungodly portal, trying your best to wrestle control of the next high-def expressions to demand your own splintered attention... Then you realize you're not having a mental breakdown at all. You're touring a haunted house -- and a chintzy one at that! So you back away slowly, crack a bad joke about black lights and flashbacks, all while drawing attention away fromyour little freak-out back there at the mask montage. Hey, happens to the best of us...
Posted by Lenslinger at 6:47 PM No comments:

...I don't gleefully drive into the teeth of a shit-storm. Weaver does; that's his Droid spewing live radar all over the the spotless interior of Unit 15. If I know Weave, he was racing toward the red zone while manning the scanners while popping off the occasional snapshot. Don't worry, though. Dude's like a trained professional. Plus, he's seen like every episode of Dukes of Hazzard there is - even that crappy half-season when they replaced Bo and Luke with weirdly inverted doppelgangers. But I digress - something you'll never see Chris Weaver do, as he usually bum-rushes the fecal spray without a safety goggle in sight. Me, I'm a bit more reticent.

In fact, when Chris and countless other camera-nerds were out chasing rainmakers, I was ensconced in a dry edit bay, smoothing out less than linear transitions and sorting Peanut M&M's. Hey, it wasn't like I was hiding! Rather, I was fleshing out an update on a grim hit and run. Mother Luck stuck me with a reporter today and while we hunkered over source material inside, the rest of the world was unraveling. Or so it seemed when I wandered into the newsroom... Scanners crackled, managers shouted and reporters read out loud... why it took me twenty minutes to slow-crawl out of there! Once I got back to my tucked-away edit bay, I considered sealing the door cracks with leftover bits of duct tape - in hopes of blocking any runaway light from catching the eye of a passing assignment editor. Nobody in here but us chickens!

Weaver, meanwhile, was triangulating cloud patterns with dispatcher accents, hoping like hell to pierce the thrum of the front so he could shoot some wicked cool footage and obtain videographer immortality. If it sounds like I'm mocking him, I'm not. Okay, so maybe just a little but the truth of the matter is I got mad respect for Weave and anyone else who voluntarily plunges into the Great Unknown. That, of course, is where memories are made; highly stimulating visual situations so deeply imprinted they'll be making your eyelids twitch long after you've been relegated to some rest home hallway. I got mine. So too does Weaver, but unlike so many others of his particular vintage, he's retained an insatiable taste for the uncomfortable chase FAR PAST the normal news career spoil date.

I really respect that - even if my own idea of proper rain-gear simply involves staying the hell inside.
Posted by Lenslinger at 10:19 PM 1 comment: 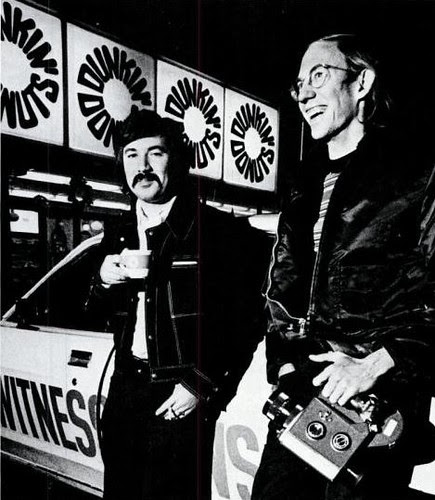 Jean jackets, muscle cars, an unabashed doughnut addiction... it appears I have a couple of new heroes. Meet Ronnie James and David Robinson, two period lenslingers whose gritty days and grittier nights come alive on the pages of a 35 year old magazine. Many thanks to archivist extraordinaire Amanda Emily for tipping me off to said treasure. Somehow, Amanda always knows when I'm running out of steam. the pictures, articles and books she sends my way are a constant reminder that a captivating cameraman's account is not only possible - but has already been done time and time again by cats a helluva lot cooler than me. ..

But you knew that.
Posted by Lenslinger at 9:07 PM 1 comment: 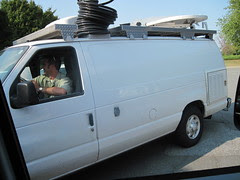 I've absolutely no idea how I'll be spending tomorrow, which is just the way I like it. What I do know is some time between nine and ten a.m., a clutch of co-workers will disperse from a crowded room and with no small amount of snark tell me just what they'd like to see shoved into my news-hole come five o clock. Okay, so it could be at six as well, but the fact of the matter is there's about ninety seconds of dead air with my name on it each day and simply filling it becomes my manifest destiny well before the Seventh Circle of Hell takes shape, er I mean, well before Hoda and Kathie Lee take over the Today Show. Did I mention it never gets old? 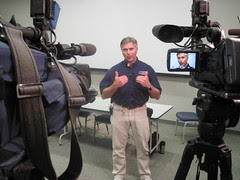 Because it does. All jobs do. In fact, I'm pretty sure that's why they pay you in the first place. In my particular case, it's less than a King's ransom. Hell, it falls short of a court jester's clothing allowance - but what's few bells hanging from you hoodie when you're busy living your dream? Don't answer that; just know that my dreams have kinda changed since I worshiped at the feet of that Lou Grant Spin-off. You know, the one where Lou leaves the Mary Tyler Moore universe for a crack at running a city paper? It probably wasn't very good TV, but it sure as hell rung my eleven year old bell. Ever since, I've been infatuated with telling stories under less than stellar conditions. Hmmm? The Suits want a nat sound piece on the sign-language academy? Not a problem... 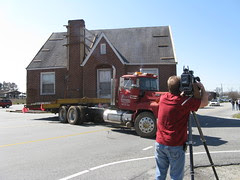 After all, I'm a photog. Though lacking any official sheepskin, I got a Ph.D. in Making Shit Happen. I also operate under the delusion that I've seen it ALL before - which technically isn't true. Still, it's a mindset that comes in damn handy when you're standing in the middle of the road and some family's beloved homestead is heading your way. It's the kind of assignment that's really pretty stimulating the first dozen time you do it. After that, you start to grouse a little when the hardhats start to dawdle. "Hurry up! I'm On Deadline here!", you want to scream but never do because not so deep down inside you know that the world doesn't operate on your schedule and even if it did, you'd find another highly creative way to bitch about it.

After all, you're a Photog.
Posted by Lenslinger at 1:12 PM No comments: