Where IS John Wilkes Booth? That was the question gripping the nation seconds after the dastardly actor publicly executed Abraham Lincoln. In fact, the .44-caliber ball had barely scrambled the Great Emancipator's brain before Booth staged a hasty and, as always, theatric escape. Dropping from Lincoln's box to the stage, the famed tragedian wheeled on the ankle he'd just broken, declared 'death to all tyrants', and hobbled away to a waiting horse. In his wake, the stunned patrons of Ford's Theater could only reel at this unrehearsed climax - for no American audience had ever before witnessed a Presidential hit. This was more than the deranged act of a famous thespian turned slavery sympathizer, this was assassination as performance art.

Of course, the events of April 14th, 1865 are well known to anyone whose eyes have glazed over in history class. What James L. Swanson does in his book Manhunt: The 12 Day Chase for Lincoln's Killer, is follow the erudite actor on his speedy journey South - an unplanned trek into the wilderness in which the crippled and cosmopolitan actor was horribly miscast. Swanson paints a vivid picture of Booth and his accomplice ensconsed in the Pine thickets of Maryland as Union Troops thunder past. Later, we watch as the vain dramatist reads pilfered newspapers and recoils at his disastrous reviews. Instead of propelling him to Secessionist superstardom, his murderous deed earns him the hatred of a nation and forever cements Lincoln's status as beloved martyr and liberator.

With 'Manhunt', Swanson provides illuminating details to a story many of us think we know well, probing not only Booth's distorted psyche but also the motivations of those Southerners who chose to help him elude authorities. In the end of course, the asssassin's fellow rebels turn on him, tiring of his pompous demands and promptly locking him in an old tobacco barn. When the cavalry arrives soon after, the results are a farcical back-and-forth round of 19th century negotiations, followed by an impromptu arson and a fatal shot to the head. Defiant, delusional and debonair to the end, John Wilkes booth died like common rabble nonetheless, a grisly fate far removed from the Southern glory he so envisioned for himself. Read 'Manhunt' for the thrill ride, but also for the hundred and forty year old reminder that truth has always been stranger than fiction.
Posted by Lenslinger at 8:11 PM No comments:

The Places I've Been 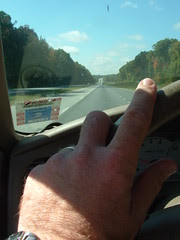 From cat-napping in a gold mine to stealing a ride on the Good Year blimp, the press pass around my neck has afforded me access to a life of stilted intrigue. But like the copier salesman who dreams of being a dashing day-trader, I have chased cadaver dogs in the rain while fantasizing about a nine to five desk job. The grass is always greener of course, but when a jostling Sony is riding shotgun on your shoulder and the deadlines are gaining ground, the opposing turf is downright iridescent. Luckily though, I usually find time to reflect before doing anything rash, lest I foolishly remove my self from the chase. True, my years of adrenaline abuse have crystallized into chronic detachment - but even I can get juiced about some of the places I’ve been…

Ever pulled up to a fresh plane crash in a dusty live truck, only to be yelled at by men in windbreakers for driving across the debris field? My Bad!

Ever started a near riot at a middle school pep rally, just by walking across the gymnasium floor? Personally, I’d have killed for that power back in the 7th grade.

Ever waded through an angry crowd outside a midnight murder scene and acted like you belonged there? It’s all in how you carry the tripod.

Ever tried to keep up with a screeching platoon of cleavage and baby strollers as they raced toward a shimmering mirage of desert camouflage? Don’t get caught in the middle...

Ever made elevator small talk with a handcuffed evangelist facing federal charges and widespread scorn? Try to avoid the touchier subjects - like God, politics and reasonable sideburn grooming..

Ever shadowed a prize patrol of corporate cheeseballs they bestowed trailer park residents with fabulous cash and prizes? Watch out for the crush of relatives pouring out of back rooms.

Ever tried like hell to avoid hitting the co-pilot controls with your big lens as the guy in the aviator glasses to your left looks for a place to ’set her down’? Man, I hate when that happens!

Ever jammed a finger in one ear and your cell phone in the other as the packed courtroom around you erupts in unexpected verdict fury? Trust me, spent vengeance has no volume control.

Ever hunkered over an upturned viewfinder as blue-haired college kids walked all around you, waving manifestos on homemade poles while they cursed the cabal behind your logo? Lousy punks.

Ever hid behind your camera as a couch-bound zombie described the loss of a recently-slain loved one? Do yourself a favor - skip that one...
Posted by Lenslinger at 11:44 PM 2 comments: 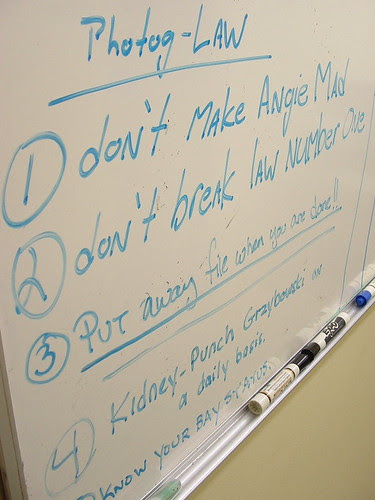 Back during Sweeps, Weaver thought a dry-erase board posted outside the edit bays would come in handy. It did, but now that the ratings period is over, our message center has devolved into the usual scribbled taunts and intra-office ridicule. Most recently, we've used the board to issue the kind of decrees normally found in corporate beer commercials. Personally, I love the idea of 'Photog Law' and plan to wrap my noodle around the concept as soon as I stop spending every evening at some holiday recital/program/concert. Until then, I leave you with Law #1, an important piece of legislation that anyone inside El Ocho would highly recommend. As I've explained before, the lady's a menace!
Posted by Lenslinger at 9:43 PM No comments:

Stiff in the Wind

Hey, is that a stiff hanging from your tower or are you just glad to see me? Turns out, it was neither. Instead, some poor delusional mannequin climbed up this TV tower in Milwaukee and leapt to that great display window in the sky. That, or someone with w-a-y too little to do scaled the 1,200 foot antennae, affixed said dummy to broadcast noose and climbed down to enjoy all the lofty hijinks. That's alot of effort for a simple prank, but authorities are pursuing that lead and totally ignoring my theory of suicidal store dummies. Oh well, at least they'll have no problem spotting the culprit - as anyone who scales such a broadcast tower will suck up some seriously unhealthy radiation. With that in mind, Milwaukee police are scouring area frat houses for the Beavis or Butthead with the purplish complexion and nifty new forehead eyeball. Wouldn't it have been easier just to roll the station in toilet paper?
Posted by Lenslinger at 9:44 PM 3 comments: