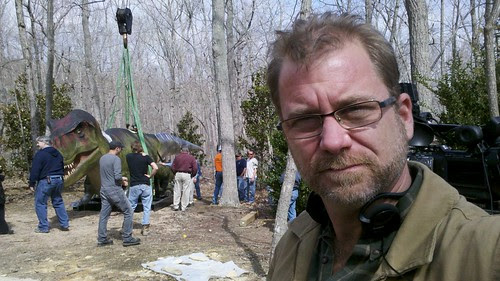 Okay, so it's no radioactive spleen, but there ARE occupational hazards to long term lenslinging. I'm not talking ham hocks and eyeballs either. You can throw out your shoulder or screw up your vision earning all kinds of paychecks. No, I'm more interested in what unfettered access to the good, the bad and the ludicrous does to your noodle. Take your sense of wonder. While you're at it, look for mine. I haven't been bowled over in the line of duty since a sinister semi tried to flatten us. (Not that I'm complaining.) But every once in a while, I do worry about my deep-seeded aversion to being in awe. It's not that I've seen it ALL. But having processed an awful lot of broadcast operas, I fear it's ruined my ear. These days, I wander from shoot to shoot with a certain insouciance, an urgent apathy borne of a million deadlines met. It's not my prettiest feature.

But please, don't take that lack of surprise in my eyes as a sign of cynicism. That I keep in another coat. What I bring with me every day is a heavily concealed appreciation of the absurd. I keep it buried in my run-bag, right next to the spare nine volts and Homer Simpson Pez dispenser. That way I'll have to dig for it the next time something insipid this way comes. I found doing so leads to the most unlikely exchanges...

"They're erecting animatronic dinosaurs all around the Zoo? Will there be refreshments?"

"The forest service is dropping flammable ping-pong balls onto bone-dry woodland? Do I get to wear a funny hat?"

"Bigfoot got caught in a prostitution sting and is asking for me? Those pills aren't mine, Officer."

Anyway, I'm not particularly proud of my prosaic state of mind. Twenty years ago, I'd get excited at the sight of color bars. These days, a space alien could appear hovering over my bed one night and what I'd wanna do the most is sit him down for a triple-lit interview, maybe get a few shots of him and the other grays as they prep whatever anal probe they brought along for me. Only after I woke up three days later with little memory and no underwear would I allow myself to be surprised. Even then I'd squelch my alarm until I got a good look at whatever footage I captured. If I got a lot, I'm bum-rushing the set with a carousel of color slides. But if I came away from a close encounter with no media  to speak of, I'd most likely keep my mashed potato sculpture to myself - for every good photog knows if you didn't capture at least part of it on video, it simply did not happen. But that's a story for another day. I'll tell you all about it sometime, but when I do, please ---

Posted by Lenslinger at 10:02 PM No comments: 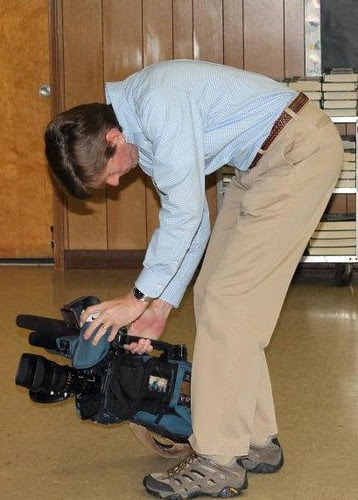 Seen here in its natural environment, the Lenslingamus Maturicus is known for contorting its form to feed itself and others. Note that sensible hoof covering, the belted thorax, the dime store wristwatch ... all signs of a fully grown photogopod. But don't let the everyday markings fool you. This species is a cold blooded killer, no matter how feeble or bitter they may appear in advanced stages. The undomesticated news shooter can stun its enemy with a panoply of offensive maneuvers... the overhanded lens launch, the spinning microphone drop-kick and, most grotesquely, the Darth Vader duck walk (pictured above). Considered the most vile member of the broadcast stratum, the seasoned slinger can project a noxious bile from damn near thirty yards, stun its prey with rambling war stories and assemble cogent timeline even when fully hibernated. Most lose their distinctive markings as they mature, but just because a 'Freebird' t-shirt has been replaced by a bland, blue button-down doesn't mean you should approach this most ornery of scavengers unarmed. Known for their odorous hides high tolerance to pharmaceuticals and general disdain for meaningful human interaction, black-market tranquilizer darts have been sanctioned by governing bodies in all fifty states.

Approach with caution, if at all...
Posted by Lenslinger at 10:35 PM 3 comments: 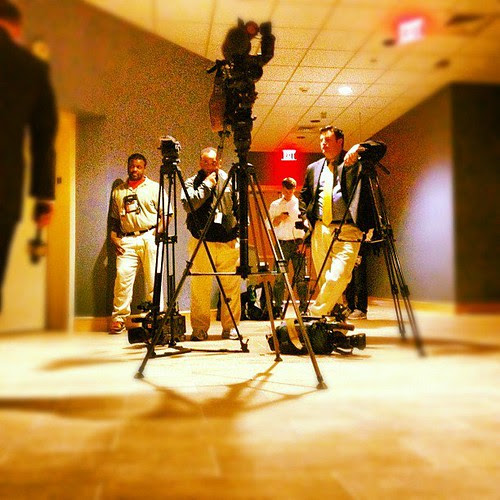 Doesn't matter what it is: draft pick, nervous jury verdict, new sherbert flavor. When camera crews collect in corridors waiting for something solid to be said, one can almost taste the inquietude. Hey, you'd get antsy too if the only thing standing between you and a late breaking live report is a constipated bailiff or weak-ass wi-fi or some other such obstacle about to derail your deadline. Why it's enough to make you punctuate your displeasure with microphone jabs or at the very least look up from your game of Angry Birds and ask when the hell we're gonna light this candle. Me, I stick to fidgeting, 'til my verbal tic surfaces and I begin using thirty dollar words when any old utterance would do.


"These miscreants don't grasp the concernment of my dispatch!" I'll blurt out to no one in particular.
That's usually when someone rolls their eyes or suggests I go wait by the urinals until word comes down from the town elders as to where they're gonna build that new moratorium. It's a mental rash no ointment can quell and one nicely crystallized by Lenslinger Institute graduate Geoffrey Levine. When I asked him what the hubbub was all about he mentioned something about UNC officials facing sanctions from the NCAA. I dunno, must be some kind of code talk. Guess that's how they do it in Capital City. Now if you'll excuse me, I have to tie my competitor's shoelaces to his tripod. Otherwise he won't tuck and curl properly when I push him down that stairwell we're gonna pass in the mad dash to the satellite trucks. Hey, ALL'S FAIR in love and journalism, right?

Right?
Posted by Lenslinger at 10:13 PM No comments: 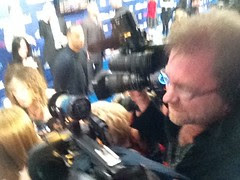 Ahh, Hollywood. You can backpedal down a spiral staircase with a fresh death-row inmate and four photogs you don't even like and STILL not suffer the concussion that is a red carpet event. I knew that going into my latest American Idol mission and aside from stopping to buy a protective cup, it didn't really slow me down. Maybe I'm a masochist. Maybe I just like the view there on the rim of eminence, where farm girls twirl and crooners moon until celebrity judges nudge each other and ogle another ingenue. Maybe I'm too old for this shit. That's what I was thinking last week, anyway, as Shannon Smith and I wedged our way into an unforgiving wall of glass. A strip of masking tape marked our spot inside the rented tent perched atop that parking deck, but with dozens of other camera crews vying for a similar view, it was all I could to hold my ground. But hold it I did, thanks to grit, fortitude and a handy step-stool I'd brought along. This ain't my first rodeo - or even my first red carpet. Idol taught me The Way of the Rug long ago. Hell, I was there the night Hasselhoff cried. But that's not important right now. What is important is that someone pry that microphone cube out of my spleen, 'else I'm gonna climb down from this wobbly perch and choke a certain dandy. LOOK OUT! 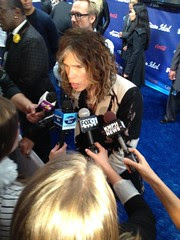 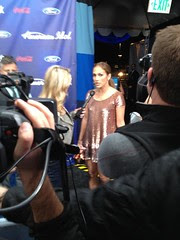 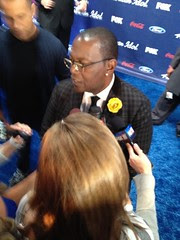 Oh, it's just the judges. From the way those print photographers started yelling, I figured a cloud of anthrax just blew in. That, or somebody knocked over a box of rattlesnakes. Hey, I'm no apologist for the pretty people, but you've never felt bad for a movie star until you've watched a guy who looks like he slept in a urinal click his camera and yell "J-LO!" forty-seven hundred times. It's enough to make Celebrity Rehab seem appealing. Or even American Idol. Fact is, the faces have changed since I last rode the red (blue) carpet. Not behind the camera, though. For all its global reach, Idol seems to be staffed by the same six people. There - that dude pushing Randy Jackson into place, wasn't he the one  with the bullhorn in Atlanta? I'm pretty sure I remember him hurling frozen water bottles at a coliseum full of caterwauling wannabes. Anyway, back to the talent. That Jennifer Lopez sure is pretty. We were just about to go LIVE(!) when she stepped into the tent. Both Shannon and I wanted badly to include Jenny from the Block in our little remote, but it was not to be. A competing crew ensnared Lopez moments before our hit and, despite a variety of hand gestures, I was unable to free her in time. I'm sure it's not the first time J-Lo's watched camera crews fight over her. Nor the last.

Hmm? What's that? WHO am I wearing? Uhh, at last check, it was an entertainment reporter from Tulsa. She's been digging her heels into my shin ever since Seacrest entered the tent. By the time he gets over here, I figure she'll have climbed me altogether. Where does an overly made-up mother of two with jet lag get that kind of energy? And is that really her cameraman's pancreas hanging from her key-chain? Man, those aging anchor ladies sure know how to unpack an elbow. If she digs one more body part into my sternum, someone's gonna have to change their last name. I just hope I can write off a week of chiropractic visits on my expense report... but enough about me.

Let's talk about him. Steven Tyler, that's who! Despite the presence of J-Lo's famous, uh, entourage, the lead singer of Aerosmith was by far the biggest spectacle on the carpet that night. 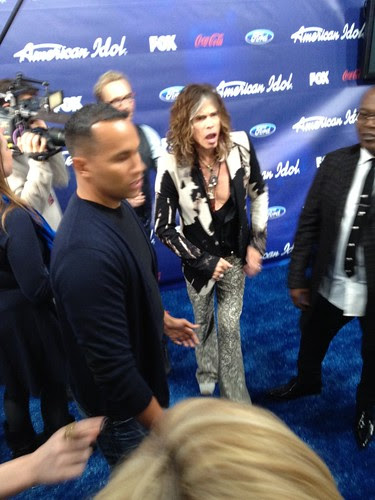 Now, I can't vouch for what he told Lara Logan, but during our time together, Tyler was gracious, patient, almost lucid! He may be lacking a few synapses, but, hey, who here isn't? Yes, before his handler could pry him away, the better half of the Toxic Twins mused on this year's contestants, serenaded some reporter chick's little girl and remained wholly appropriate. Only twice did he cock his head to the side and listen, as if a radio station only he could her just dropped the needle on 'Sweet Emotion'. Truth is, Tyler could have started making shadow puppets and I'd hold my lighter up high. Dude's an American Bad-Ass. Sure, his band mates balked when he signed on for American Idol, but when's the last time Tom Hamilton puts asses in the seats, eh? The way I see it, Tyler's not only aging gracefully, he's giving a few folks the middle finger along the way. How Rock and Roll is that? Like I telling my 4th grade classmates, Aerosmith's way better than those morons in KISS! They dropped 'Big Ten Inch (Record)' on an unsuspecting planet, helped bridge the rock to rap gap in the early 80's, even pulled off one of the finest Beatles covers ever! Yes, for all the gasbags that passed through my glass that evening, I was happy to share the rarefied air with this living legend. Besides, for a guy who still dresses like Doug Henning's mushroom dealer, he seems to feel intrinsically hip.

Who am I to hate on THAT?