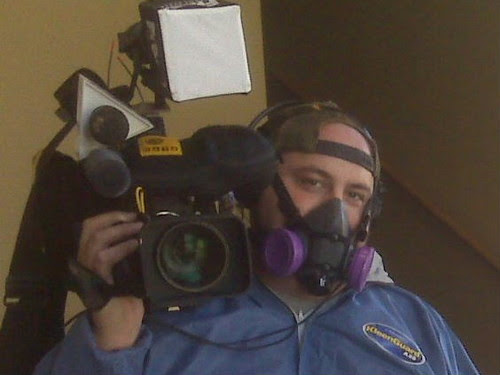 You know, I'd wondered what happened to my old pal Steve Kiggins - ever since he fled the Piedmont for the faster traffic jams of Atlanta back in 2006. Now, photographic evidence has surfaced that leads me to a few conclusions. Clearly he's been assimilated. That, or sucked into some doomsday cult where they hang multiple microphones off their fancycams and walk around all dead-eyed. Or maybe that's how you have to dress in a city where every other street is named Peachtree. Either way, it's a damn shame, for this masked mutant was once the jolliest of photogs. Now it seems he's a cyborg or a survivalist or, judging from that backwards hat, a charter member of Hootie and the Blowfish. It's probably just as well; dude used to me run me ragged trying to keep up with him at news scenes.
Posted by Lenslinger at 7:44 PM No comments:

The Return of Daughtry 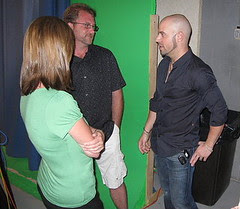 No, I didn't DISCOVER Chris Daughtry - but I did meet him days before he sang for Randy, Simon and the animatronic nutbag known as Paula Abdul. By then Shannon Smith and I were grizzled veterans of the American Idol audition circuit; we'd interviewed hundred of hopeful vocalists and tried not to cringe as one by one, they caterwauled into our microphone. Chris was different. First, he didn't seem at all insane. Second, dude could wail. When he first opened his throat for us in a downtown Greensboro parking lot, Shannon and I were flabbergasted with what came out. She was sure he'd win the judges over. I figured he'd have a fine career singing Alice in Chains cover tunes. Neither of us knew he'd breathe new life into the world's cheesiest talent show, let alone sell five mee-llion copies of his debut CD. Perhaps you've heard of him...

Anyhoo, Daughtry's been kind of busy since Shannon and I last sat down with him in Los Angeles. A tour with Bon Jovi, a handful of American Music Awards, hogging the top spot on VH1's Top Twenty Countdown: these things can keep a fella pretty occupied. But Chris did a funny thing on his way to world domination. He threw down roots right here in the Piedmont, the same region he called home when no one knew his name. That officially makes him 'a local boy' - albeit one who regularly jets to the West Coast to hang with the music industry elite. Lately though, Daughtry's been busy in the studio, crafting the follow-up to his initial release. Now that it's completed, he's kickin' back for a bit before 'Leave This Town' drops in mid-July.

Which is why it was so cool of him to drop by El Ocho - even if he did so a full 24 hours before we expected him. Originally tasked with helming the interview shoot, I was uncharacteristically out of pocket when Chris rang up Shannon and said he was on the way. A great scramble ensued, one in which managers spoke in tongues, studio techs were torn from their post-show coma and a cat by the name of Weaver stepped in and stepped UP. When all was said and shot, they did quite fine without me - though I couldn't resist dropping by with the wife for an after-camera chat. If this kind of thing interests you, go check out Weaver's backstage account, peruse the exhaustive photo gallery or simply watch the first in a series of breathless reports. After all, I still had to edit the damn thing... 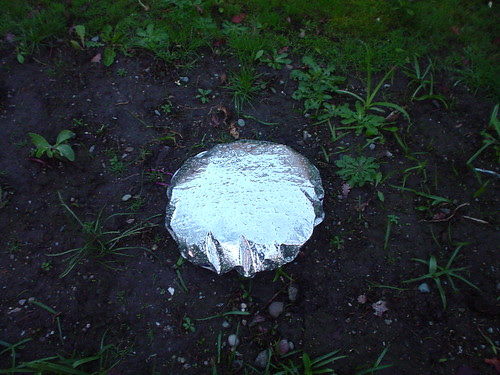 G. Lee grimaced, but only for an instant. After that he realized the producer was right. His repo-man friend wasn’t going to call back - not in time for him to shoot the tow truck in action and get it back by six. That’s what time the newscast he was assigned to started and if something interesting didn’t happen soon, it would feature 100 seconds of dead air. G, Lee couldn’t let that happen - even if it meant robbing the night crew of a perfectly good follow up. Besides, he was the one who’d rolled out of bed early that morning, who’d fought with a road map through most of Cornwell County ’til he found the low bridge with the underbrush all bent, who’d looked and looked for skid marks but found none, who’d settled for bits of windshield glistening at the bottom of a twenty foot drop.….Why shouldn’t he be he one to hang a face on it? G. Lee could think of a dozen reasons why not, but all told they didn’t add up to a hundred seconds. So he grabbed his keys and left the newsroom.

This time the bridge was easy to spot. No sooner had G. Lee crested the hill than a twinkle of light led his eye to the troubling abutment. There, a single Mylar balloon twisted in the afternoon breeze, catching sunlight and sending it skittering across the quiet valley. It hadn’t been there earlier, this beacon of grief, but he wasn’t the least bit surprised to see it now. Not with Cromwell High two short miles away. Not with one of its promising Juniors now lying on a city slab. G. Lee blew threw his teeth as he coasted past the little bridge. A tenth of a mile later he turned onto the same dirt road he parked on earlier, but this time he drove further down the path until the tree branches totally obscured his news unit’s garish logos.

Hopping out, he raised the back lid and fished around in back for what he needed. Camera, tripod, run-bag: he gathered them all together and closed the lid, leaving his feelings safely inside. A few minutes later, G. Lee settled into the shadows of the forest overlooking the bridge - far enough in to be missed at first glance, out in the open enough not to be accused of hiding. Overhead, a family of small brown birds looked down in judgment as he plucked at a few blades of grass, dickered with his cell phone and glanced at his watch. 3:05. Closing his eyes, he drifted and almost convinced himself he heard a bell ringing. G. Lee thought he knew what was about to happen. He only hoped they’d be on time.

They were. First a pick-up truck, then an old Volvo approached; their young drivers parking on the narrow shoulder of the road before abandoning them altogether. Then more cars rolled up until both sides of the asphalt were lined with vehicles sporting Cromwell High parking stickers. As the engines crackled and cooled the cars’ passengers disembarked. Cheerleaders, cross-country runners, Goth kids and teenagers of little description gathered around the little bridge. Some cursed, many cried, a few smoked. All grieved the inconceivable absence of their classmate, a young man of seventeen who’d managed to kill himself with little more than bravado and momentum. From his perch, G. Lee watched it all in tiny black and white, rolling on the makeshift memorial in the making. But the bosses would want more than distant distress. They’d want tears, up close and in focus. G. Lee knew what he had to do. He collapsed the tripod with a single latch release, slung his camera over an opposite shoulder and turned his wireless microphone on. Spotting a young girl sobbing over a opened yearbook, he began making his way down the hill, even before the competition’s news car pulled up and greatly quickened his descent.

It bothered him sometime, how it didn’t bother him anymore.
Posted by Lenslinger at 5:19 PM 2 comments: 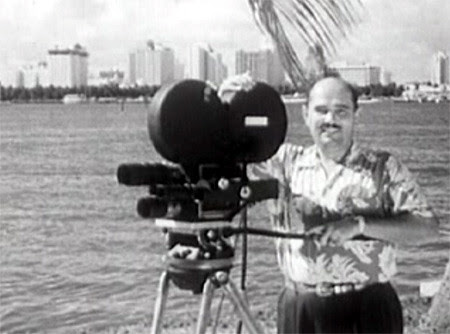 (Via Amanda Emily) Long before he dedicated his life to protecting toilet tissue, Mr. Whipple enjoyed an invigorating career as a Miami news man... Okay, so it's actually Warner-Pathe News photographer Cliff Poland back in the autumn of 1950. Back then, things were different: news organizations shot on film, no one left home without a wristwatch and grown men ALWAYS tucked in their shirttails. And what a shirt! I think I have that same floral print in the bottom of a drawer somewhere, though even on my least wrinkled day, I never rocked it quite like this Über Photog. But he wasn't just fashion forward. Poland was a storied lenslinger; he was even aboard the USS Missouri when General MacArthur and a couple of dozen Japanese ended a little thing called World War II. Ever the stickler for protocol, MacArthur didn't want a bunch of newsman jamming microphones in his face during the surrender. So Poland fabricated a curved stand that would place the mics in front of the general, but below his ornery eye level. The ceremony got underway, a temporary peace fell over the globe and a press conference practice was born. Not bad for a guy in a tropical top...
Posted by Lenslinger at 6:05 AM 1 comment: