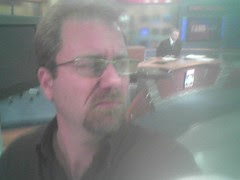 Fake holograms seem to be all the rage in newscasts lately, so last night Weaver and I hooked a few car batteries up to our fancycams and beamed my tired ass into the studio. It was all pretty cool at first - until the floor director got spooked by the weirdly shimmering lenslinger in the corner and tripped the fire alarm sprinkler system. I'll spare you the soggy details, but let's just say I'm not allowed anywhere near that part of the building whenever the ON AIR light is on. That and I gotta somehow reimburse a region full of forecast fans for muckin' up the '3 Degree Guarantee'.

...Okay, so I merely wandered through the set during a show and whipped out my cell-phone cam, but the fact remains I'm still haunting these overlit shrines - nearly two decades since I weaseled my way into my first affiliate nearly two decades ago. You know the story: Young man with a mullet cons his way into local TV station, only to find his special purpose. As parables go it's kind of lame, but it's all I got - so I'm milking it for yet another blog-post. Back then you could smoke in the studio, the teleprompter was a conveyor belt with a hand crank and the floor was so warped the cameras would often roll away under their own power. It was GREAT! Of course it only took a year or so of zooming in on air before I ditched the headphones and began my lifelong pursuit of news. What can I say? I was young and full of wanderlust; certain that I'd achieve nirvana if only I could shoulder one of those manly-cams. Turns out I was only half right and while I don't regret abandoning the set for the rush and squalor of a marked news unit, part of my heart will always reside in the studio.

Then again, I studied under the greats: John Spence, the late great Jim Woods and that vested legend known region-wide as Slim Short. In the beginning I was amazed these household names would even give a shaggy young bon vivant like me the time of day, but that was before I realized they were just glad the latest stagehand kept showing up on time. And did I! Unlike every other career attempt I'd flubbed, running studio-cam on 'Carolina Today' made me feel like somebody. It didn't matter that I was making minimum wage. Nor did it matter that my then-girlfriend had to sit behind the wheel of my dilapidated Toyota and steer while I pushed it down the hill in hopes the damn thing would crank. 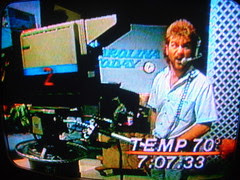 Most (early) mornings it did and I'd happily jump in the driver's seat and motor off to what felt like the greatest crappy job in the world. Yes, those were the good ole days and the memories made back then almost made up for the dark times that would follow, when I found myself rolling out a barrell full of contest entries in hopes Marv the Weatherman wouldn't mangle whatever name he'd draw after each evening's five day forecast. Almost.

Now if you'll excuse me, I have to go towel-dry the weather wall. Seems the water blotches made by the sprinkler system are showing up on the chromakey and sparking a run on umbrellas across the greater Piedmont Googaplex. Like that's MY fault!
Posted by Lenslinger at 12:05 AM 3 comments:

Normally, I keep my schmuckometer focused on the contiguous U.S., but an egregious case of lens abuse has forced me to go international...


Dateline: Guiyu, China. A 60 Minutes crew working on a story about the mishandling of electronic waste found conditions more perilous than an Andy Rooney shoot when hired goons tried to make off with their hardware. The attackers, presumably men working for the toxic e-waste operation, were unable to rip the cameras from the crew's grip - but in their attempt they provided CBS producers with invaluable promotional material. Fronted by Scott Pelley, the results of the investigation will air this Sunday night at 7. It reportedly implicates a domestic business or two - along with the aforementioned Far East henchmen. I, for one, will be watching and not just because it precedes The Amazing Race. Until then, I'll be thumbing through my pocket translator in search of the Chinese word for schmuck.

View to a Thrill

Think YOU had a good view of Obama's acceptance speech? Check out the vantage enjoyed by one Wes Barrett - ex El Ocho photog, now citizen of the world. I don't know exactly how Wes found himself twenty yards from the President-Elect last night, but I'll chalk it up to his newfound credentials as a D.C. insider. That, or he bumrushed Candy Crowley for a press-pass upgrade. Either way, the man who once shared a Norman, Oklahoma dorm room with your friendly lenslinger truly witnessed history last night, and gorged on eye candy he'll no doubt share with his descendants. That, generous visitor, is the essence of why we labor so behind the lens: not for the lack of glamour we endure, but for the chance to see the world from the oddest of angles. That's heady stuff for the most jaundiced of globetrotters. Imagine what it felt like to a former farm boy like the Barrett in question. So take heart,a ll you cornfield dreamers out there: You too can traverse the hemisphere with a Sony in tow. All you gotta do is work hard and act like you've been there before.

Back with the Flash 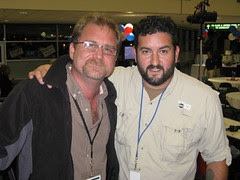 Though I spent much of the evening transfixed by my windshield wipers, I did come in from the rain long enough to visit some constituents. Joe Avary was among the many lensers loitering on the camera riser at Kay Hagan's pre-victory bash and when I arrived we engaged in a little photog fellowship. Longtime readers of Viewfinder BLUES will remember Avary as Joey Flash, that quirky nomad who spent a year under our tutelage at El Ocho. It was there he transformed himself from all around cameradude to full-fledged photojournalist. Certainly others assisted in his ascent, but I always felt a special kinship to this exuberant oddfellow - as he too savored the feeling of working solo. These days, Joey Flash is plying his wares in the rarefied air of Asheville - that bohemian mountain hamlet that fits him to a wrinkled, unwashed T. As we're both shameless self-promoters, we happily paused for the above snapshot - after which I castigated him for letting his own blog rot. As fleeting an encounter as it was, it was a personal highlight of an otherwise historic evening. Now if you'll excuse me, I have to go fill ninety seconds of TV newscast. I guess some things DON'T change.
Posted by Lenslinger at 8:43 AM No comments:

It’s Election Eve and your local news photog ain’t lookin’ forward to tomorrow. Why would we? Long lines, crowded ballrooms, crushed supplicants, the occasional dangling chad ... it may be Democracy in action, but it can make for lousy television. Don’t get me wrong: I’m as eager as anyone to see Dubya go back to brush-clearing in Crawford (instead of wiping his ass with the Constitution), but the whole way we go about tallying the votes is a bit much for your above average lenslinger…

You ever jostled for oxygen on an overstuffed camera riser - just to get the same shot as the next grumpy cameraman? Ever sopped up grease from a fast food bag while old ladies picked at rubber chicken plates? Ever backpedaled with one eye open before a crestfallen incumbent? Ever dodged the glares and daggers of inebriated supporters as their hero made his concession speech? Ever stayed up all night cutting update after update after update for the next morning’s newscast? I have and it never fails to suck.

Even the winner’s camp can be a stone cold drag. Whether the new Governor gained office by the thinnest of margins or the Senator-to-be faces a mandate not to foul things up as much as her predecessor, count on their acceptance speech to be pushed back to j-u-s-t past the last possible second. I know, I know, there’s political theater to be staged, but explain that to the producer in my ear - the one who’s been mainlining Red Bull since the afternoon editorial meeting. He’s got a show to stack and nothing short of an alien abduction is going to convince him you’re not screwing him on purpose.

Then again, I’m a feature guy at heart. I’d rather cover a rubber duck race of one than point a camera at the new leader of the free world - much less the guy who just won the right to scrape up roadkill. I’m sure there are photogs out there who live and breathe this stuff. I just ain’t met him (or her) yet. So while you’re at home Tuesday night, wrapped up in your afghan and praising or cursing the President-Elect, know the photog nation is still hard at work, their feet are killing them and no matter who wins the keys to the liquor cabinet on Air Force One, they’re due back in their respective newsrooms shortly after breakfast - where a half dozen needless follow-ups await.