Condensing distant events without much video can make for difficult television. But one of the benefits of working solo, (besides listening to your own music in the car) is near total control of your product. In the case of Lost Ring Found, I arrived on scene to find another news crew fully engorged. Luckily, they were friends of mine and we stayed out of each others' shot. But a crowded palette and Friday-itis convinced me to quit shooting long before I should have. Thus, this story isn't all that it should be, but the sweet Southern people at its center more than make up for my lack of effort. Good to know the News Gods can still smile down upon me. Almost absolves all those thunderbolts.

It's been nearly a month now since the suits slapped stickers on my unmarked news car and I'm STILL trying to get used to it. Don't get me wrong; I steered a succession of rolling billboards across the open newscape for many, many moons. But for the past few years, I've been the pilot of a quieter ride: an off-white hatchback with only a few scratches to distinguish it from a million other Mommy mobiles. It. Was. Liberating. No longer hassled in traffic, I could roll up on office buildings and imbroglios without ever letting anyone know a jackal of the Fourth Estate was chewing on the scenery. No more. Now, my once forgettable Ford has enough excitable adjectives etched onto its surface to qualify it for the pole at Pocono. So much for being aloof. Still, I've (re)learned a thing or two in my time behind the decorated wheel, mainly that volunteer firefighters bearing oversized flashlights are far more impressed with embossed lettering than they ever were at my encyclopedic knowledge of old Bullwinkle episodes.There are a few OTHER things to consider.

I'm not so much a reckless driver as I am an emotional one. Twenty years of running down deadlines with a genetic lead-foot will do that to a fella. Couple that with the fact that two high-speed interstates tattoo my home market and you get a pretty good idea why I prefer motoring about incognito. Now that a certain set of call letters adorn my every car door, I've tried to drive more like a gentleman and less like an escaped prisoner. Why, just the other day I edged off the eighty mile per hour mark when I realized the letters of my logos were sliding off the side panels.

Whether it's Metallica's Kill 'em All, some Kool Moe Dee or simply that new Katrina and the Waves track, you'd be wise to hold down the volume at red lights when your station's web address is splayed out in patriotic colors across your hood. Otherwise, you may have to explain to your superior why a news shooter who looks a lot like you was spotted singing along to The Phantom and the Opera soundtrack in mid-town traffic. And don't dare claim to be part of some cross-cultural music exchange program. My boss didn't buy that at all.

Now, I would NEVER pull my news unit under a shade tree and sack out on company time - especially now that it's wrapped in day-glo promises. But a station vehicle is more than a company car. It's a home on wheels. I have personally changed clothes, nodded off, dissected equipment and even held a seance or two in a news car - ALL in the line of duty. Okay, the seances were really just spontaneous events borne of tedium at hostage stand-offs. Whatever the case, I sure won't be as eager to host any mobile AVON parties now that the outside of my ride screams 'look over here!'.

It's human nature; you pull up to an idling news car at a stoplight and look over to see if a local celebrity is behind the wheel. Instead, you see me: a furry faced father of two hoarking down a burrito. This is good marketing? Yeah, it probably is. But I gotta tell ya, nothing will bring you out of a post-taco stupor like six set of eyes boring down on you from a primer-gray Chrysler idling beside you. And no matter how guilty I feel for not being that cute weather bunny everyone wants to see in public, I'm just not willing to cross-dress. 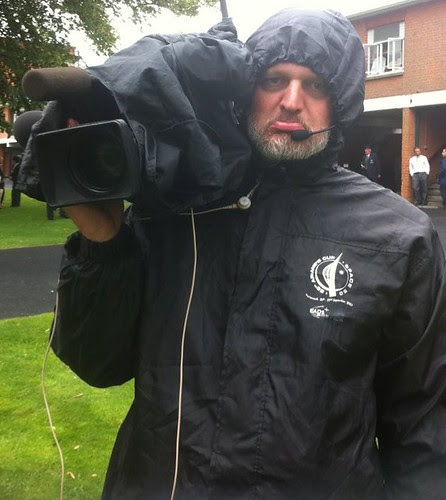 Say what you will about the British: they take to the rain like a new intern takes to an empty news cubicle. Just ask Paul Martin, freelance photog and waterlogged friend of the blog. When not rounding up pictures for the telly, Sir Paul can be found handing out soggy crumpets to his drunken countrymen, frolicking on the still wet lawns of Hampshire, or simply cradling his very own electronics as the liquid sunshine of an English summer rolls down the crack of his ascot! Okay, so he mostly just stands around and glowers at tourists, but with a mug like that, he ain't exactly gonna edge out any Beckhams off the cover of a tabloid, eh? Eh? Anyway, I find strength in his lack of resolve, for it reminds me that dripping skivvies and fogged-up eyepieces are a drag no matter what side of the pond you call home. Besides, closer examination reveals my continental doppelganger uses the exact same facial muscles I employ at Independence Day parades, mythical flash-floods and most any story involving crime tape and lens condensation between the months of, oh, February and November. Yes, with universal truths like this being being bandied about, it is any wonder I wanna move the Lenslinger Institute to Fleet Street? I just might, too - once I wrap my brain around the mother tongue. Speaking of which, does anyone know of a derisive broadcast term that rhymes with 'wanker'? 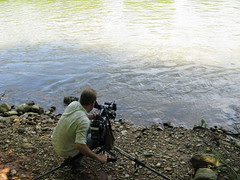 What’s a local TV news photog do once his week off has ended? Find a slightly less wrinkled pair of shorts to wear into work. Hey, every day on the clock isn’t a stroll on the beach, but I’d be suffering from sunstroke if I didn’t recognize how closely my chosen - ahem - profession resembles some kind of vacation. Think about it: Every morning I load a couple of cameras into a hatchback, take a stab at my GPS and drive to a strange location. Once there, I drag out all kinds of baggage, ask a few stupid questions and stick my lenses where I damn well please. Then I go eat something greasy, most often behind the wheel. Okay, so it’s no luxury cruise, but I’m betting there’s a claim processor somewhere who’d trade his eight hours of fluorescent light for a chance to point a reflector at a squirming news bunny. Certainly it was this semblance of adventure that first drew me out of the studio, but a rather unfunny thing happened on my way to a million newscasts...

I forgot what a bitchin’ gig this was supposed to be.

My friends outside the business didn’t. They still ask about my job with the kind of excitement I haven’t used on the job since I made deadlines in an acid-washed jean jacket. To hear them tell it, every TV news shift ends in the anchor-team gang fight scene in Anchorman. I haven’t the heart to tell them I spent four hours wishing for death the other day while some overpaid wonk prattled on about city sewage sub-laws. Nor could I being myself to divulge how grumpy I was at that battered woman’s shelter dedication the other week (The nerve of those ladies - making me wait outside like that!). They simply wouldn’t understand how incredibly stressful it is to roll up late to a ribbon cutting and distill the whole damn thing to a single clip... Okay so when I type it out like that, it sounds pretty simple, but the fact of the matter is pixelating trivia requires nerves of steel and shoulders of Jell-O. I mean, it’s not like some prom queen with a camcorder can do it!

Better yet, proceed as usual. I’ll catch up, just as soon as I get the wide angle on my perspective tweaked. Maybe then I can get a better look at the long-view, remind myself why I do what I do what I do. Oh yeah - I failed at everything else first. THAT more than anything convinces me I’m still where I’m in a pretty good place, for shouldn’t someone with my qualifications be mopping up a spill on aisle five right about now - instead of trying to decide how boring I find debris fields and backstage passes... You know, twenty years ago I would have strapped my glass to a police cruiser if it mean a new angle on the day. Now, I could probably doze off at a spaceship landing if the pod doors didn’t open quick enough. That’s not something I’m particularly proud of, for my least favorite people in the business (besides those who take themselves so very seriously) are those who swear they’ve seen it all and most of it sucks. That ain’t me.  In an effort to never forget that, I’m reminded of a string of wise words told to me by an old cowboy...

“Ride around, take pictures all day...you ain’t got NOTHIN’ to do…”

How come it seems so much more complicated than that?
Posted by Lenslinger at 11:35 PM 1 comment: