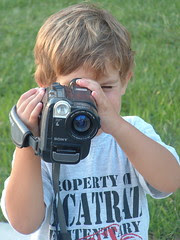 I'm worried about the neighbor's kid. The last couple of times I've seen him he's had his Mom's old Sony pressed to his face, tracking his little brother's latest attempt at a daredevil career. Having grown up worshiping at the church of Evel Knievel, I'm all for ill-advised backflips in the cul-de-sac. But I gotta tell ya, Jack's fixation with the glass concerns me. It's just the kind of proclivity that can lead a lad to a life of wobbly lightstands and drive-thru lunches. Not the kind of career plan I'd lay out for the boy. But, that's his parents' business. I swear, though - if I see him twisting knobs on the car radio too hard, or rockin' a tropical shirt - I'm staging a drive-way intervention.

I...cried at work today. No, I didn’t break down behind the wheel, didn’t bawl my eyes out over a tricky edit, didn’t sob uncontrollably at the thought of another unjust deadline. But my eyes did emit liquid while squinting through the lens at the intimacies of others. It happened quick, and early. Before the sun even rose, I prowled the floor of the local airport, grumbling under my breath at the very idea of a pre-dawn shoot as I scanned the cavernous room for something significant to document. It wasn’t difficult. Square-jawed men in crisp desert cammos, weepy spouses clutching crumpled tissues and fidgety three year olds, teenage boys wiping their eyes when they thought no one was looking - the straggling formation of stoic soldiers and their red-eyed families made for a target-rich environment. So I went to work, setting my camera atop its tripod at the far end of the hall and using every bit of my glass to eavesdrop. Hey, it’s what I do.

Nor was I the only one doing it. A burly news shooter from another station sized up the room for himself before joining me at my isolated perch. There, beside the oversized pot of artificial plants, we chatted about new cameras and old light kits, occasionally breaking off in mid-sentence to zoom in on shots that deserved it. They were everywhere. A large mother in a wrinkled track suit sat and sobbed as her son tightened the straps on his duffel bag. A small brown woman in too-tight jeans babbled into a cell phone, her words blurting out between hitching, painful breaths. A red headed couple held each other tightly, their carrot topped infant swaddled between them. The child stared at the flashing lights of the departure grid, unable to comprehend a place called Iraq.

“Man, this’ll break your heart,” said the big bear of a man beside me. “It’s heavy shit,” I answered, never taking my eyes off my viewfinder. On screen, a Hispanic man in starched camouflage drew his family close. Glancing at my red tally light, I made sure I was indeed recording as the young soldier wrapped his uniformed arms around his wife and two small daughters. For a few long moments, they all huddled together, heads down, silent. Then, with an incredibly tender touch, the soldier kissed each of his girls on the forehead before releasing them from his final grip. That’s when he stepped back and hoisted a green bag the size of a dormitory fridge onto his back. Backing up slowly, he flashed his ladies a carefree grin and winked at them before turning and walking down the tunnel toward the waiting aircraft. By the time he schlepped out of sight, there wasn’t a dry eye on the concourse.

Mine included.
Posted by Lenslinger at 8:21 PM 9 comments:

As a TV News Photojournalist, you never know where you'll find yourself: hanging out of a chopper above a toxic floodzone, peering out of an unmarked van on a dangerous stakeout or hunched under a towel in a co-worker's shower(?) But before you call the police on my friend Kevin Wrenn, relax. I'm pretty sure he's just shooting a showerhead gadget for an upcoming consumer piece. That, or he's doing freelance work for a most unsavory website. Either way, this veteran of NFL sidelines, hurricane encampements and about a million ribbon cuttings will give it his all, knowing no trick-shot goes down without a little bit of back pain. Now pass me the soap, would ya?
Posted by Lenslinger at 12:36 PM No comments:

Via the aptly-named Turd Polisher...

25 seconds of why I don't shoot football (that, and men in tights bore me senseless). Derron Dequano does, though. He was on sideline patrol at last Sunday's Saints/Packers game when a freight train by the name of Deuce McAllister jumped the tracks and flattened the freelance photog. Hey, is that a shoulder-pad in your face or did you just decide to eat your lens? Either way Dequano was sent sprawling, his camera losing a few vital gizmos in the process. O-u-c-h. I can only hope the NFL did something nice for him, but chances are they only berated him for helping to televise their global commodity. Schmucks!
Posted by Lenslinger at 6:52 AM 3 comments:

Scenes from the Scrum 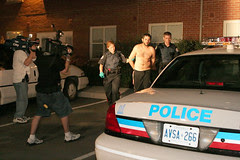 When it comes to digital cameras, I'm an amateur. For ample proof, graze the acre of frames I've uploaded for free to the internets. There, you'll find the visual underpinning of this very site, some of which are actually in focus! Or, check out the efforts of my 'Flickr Peeps' - a random scrum of like-eyed shooters who juggle their lenses far better than I. We start somewhere in Ontario, where a photog known as Canuckcam brings us this walkdown shot, proving that, North of the border or South of the Mason Dixon line, handcuffs and man-nipples go great together! 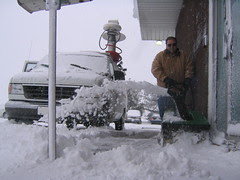 But enough fashion - let's talk logistics. This frigid still from Cadencefilm is of undetermined origin, but the snowy tundra contained within reminds me of my own adventures behind the wheel of an half-frozen live truck. See, I hail from the coastal plains of the Old North State. When I moved inland nearly a decade ago, I had to learn to drive in icier climes - and fast! What better way to do so than in a top heavy transmitter truck under tight deadline? More than once a big-stick maxivan like this nearly left me ditchbound, but when a region full of Southerners are freakin' out over a half-inch freeze, somebody has to go live from the bread and milk aisle. 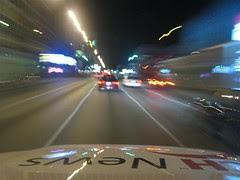 But then again, getting there is always half the fun - especially when a desk full of warm and cozy colleagues are trying to map out your every move. Funny how folk who never leave their cubicle are the first to bark out drive-times like cross-country truckers. Help like that is enough to make your average lenslinger long for the open road. I can only guess it's that kind of driver seat delusion is what led HamCam to bag this deliciously surreal shot. I just hope he squeegee'd his glass before he shot any of that evening's footage. Otherwise, there's a ten o clock producer with a roadmap, a bottle of Windex and a raging case of lens-envy. Watch your bacon, Hambone... 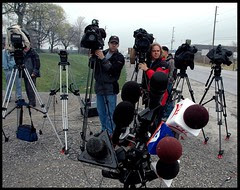 Because as we both know, all roads lead to the next press conference. Whether it's a tense clutch of squinty-eyed law enforcement types or a giddy gathering of the Friends of the Aardvarks local chapter, these impromptu assemblies are the bane of news crews everywhere - who know every time that schlub behind the podium clears his throat, a thousand housewives lunge for the remote control. In this case, Gadflypro stepped behind the microphones to capture all that televised tedium. Of course, we still shoot the damn things, just in case Mr. SpokesDork coughs up a detail we'd otherwise miss. Besides, occasionally they serve refreshments afterwards. Have you had a doughnut dipped in parking lot fumes and political rhetoric? Simply the best...
Posted by Lenslinger at 8:26 AM 2 comments: