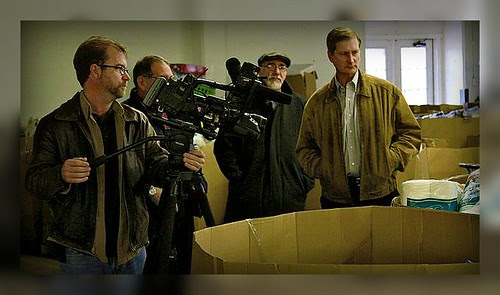 Tonight on CSI:Somewhere, a pox falls over the Greater Metro's Upper Heartland as a routine news story about an old warehouse leads to grisly discovery. Someone’s offing city officials and unless ‘Slinger and the Brain soon find out who, the next three months of newscasts will run OUT of groundbreakings, ribbon-cuttings and the occasional closed door kerfuffle. Can the surly duo put their differences aside and catch the killer? Or will wisecracking producers have to log off their Facebook accounts long enough to re-write their b-blocks? Car lot spots hang in the balance as the market’s third most popular news crew chase a mysterious figure up a rickety transmitter tire, only to watch him plummet to his death. Did he slip? Was he pushed? Or did the killer simply give up after a certain photog, enraged after missing a week of lunch breaks, berated him with the kind of language normally reserved for prison yards, warships and journalistic circles? Listener Discretion Advised.
Posted by Lenslinger at 12:24 AM 1 comment: 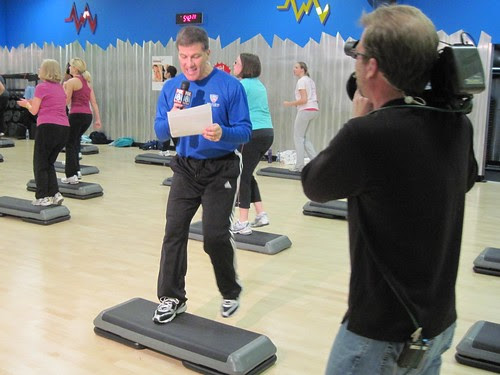 Okay, so there was this monkey, see, and for the longest time he enjoyed a quiet life of captivity up in Rock County. But the poor primate's luck took a nosedive just a couple of days ago when he bit his sitter - a lady friend of the owner's grandson who presumably just wanted to go through life without being gnawed on by some damn monkey. Well, the gnawing occurred nonetheless, 911 was dialed and a police report detailing the unlikely attack was put forth in the public record. Not too much later, the people who make it their business to read police reports noticed this juicy tidbit and before you can say "Bedtime for Bonzo", news crews were flocking to Rock County to interview the bitten monkey-sitter. Soon the Piedmont's airwaves were bristling with tales of Primates Gone Wild and among the many consumers of such pseudo-news were people in authority to do something about this semi-menacing simian.

Well, no more than 12 more hours pass before The State decrees that such a reckless pet cannot be allowed to dine on the citizenry and before anyone can so much as check their spelling, it is announced the little fellow should meet his maker and the sooner the better. You heard me, state officials were gonna put that monkey down in front of God and everybody and no amount of fawning news coverage was going to stop them. That announcement sent journalists into a frenzy and soon scribes of every stripe are making a beeline for the front porch cage the monkey calls home. One news crew in particular had been on the scene all morning and was just wrapping up when their cell phones began to melt. 'Stay there!' they were told, "we're sending a sat truck your way." So they waited while the photog who was scheduled to help a sports guy launch a fitness campaign instead headed for the hinterlands...

All of which is a roundabout way of explaining how I came to be pointing a camera at one panting Danny Harnden as he did his best to keep up with an aerobic instructor's commands while delivering his entire sportscast into a sweaty, handheld microphone. What can I tell ya, it's sweeps. Besides, an assignment hasn't got to make sense; it's just got to make deadline. Trying to work through the elements that conspired to bring you on scene is pointless. You may as well guess which pixel shines brightest in your TV screen. If you're smart, you'll realize that a sweaty sports guy makes just as mush sense as some doomed monkey and even though that pounding music is splitting your skull, it surely beats waiting for the Grim Reaper to do in some poor exotic pet in a sequence of shots that will never make air anyway. I only wish someone had explained this to all these fine folks in spandex who one by one danced up beside me to find out why I was slinging glass around their aerobics class...