Most people think of 'The Media' as a bunch of heartless bastards and quite often I'm inclined to agree. But an incident outside the John Edwards trial today reminded me of just how compassionate the Fourth Estate can be. It happened just after lunch. Inside the federal courthouse, jury members were busy trading digits, er, deliberating while a sweaty collection of photogs, scribblers and recordists simmered outside. Suddenly, families of varying ethnicity began showing up. At first, they seemed confused at the rows of cameras flanking the courthouse door but after some encouragement they made their way inside and upstairs. There, out of reach of our many lenses, a naturalization ceremony was taking place. You know - that final part of the immigration process where said newcomers raise their right hands and swear allegiance to this wonderful country of ours? It's a wonderful thing to witness and I've put several such ceremonies on the news. But cameras are banned from federal courthouses, so the many news crews perched outside could only continue their marathon of tall tales and dick jokes while inside, Democracy itself unfurled.

A little while later, our nation's newest citizens began dribbling out, many clutching flags and wearing grins. That's when the damnedest thing happened: members of the press, camped out in lawn chairs and awaiting John Edwards, began to clap. The first time it was spontaneous. By the third time a new American family bounded down those steps, it was tradition. I myself was busy on the periphery, but even my crusty, shriveled heart swelled with pride if not good cheer as a much maligned sector of American society welcomed our newest neighbors into citizenship. Will we dive through a dumpster to see if you're swindling old ladies? With pleasure. Will we crawl up a fresh widow's porch and ask for a better picture of the departed? In a skinny minute. Will we sleep in our cars if it means snagging a shot of a Senator's mistress with a baby in her hip? With pleasure and considerable flair. But we'll also champion the underdog, comfort the afflicted and celebrate all the good our country represents - when we're not shining a much-needed light on the bad and the ugly.

Just don't tell anyone, would ya? People will start to think we're Human.


It's been four days since jurors began deliberating John Edwards' fate and the former Presidential candidate ain't the only one getting antsy. Outside, a growing gaggle of local, regional and network news crews are locked in mid-fidget as hour after hour passes without an awful lot of anything to report. Why, it's enough to make you interview each other, a scurrilous practice I try to avoid unless it's the only thing that will satisfy my bosses that day. That proved to be the case on Friday, a twelve hour shift that now seems so distant all I can remember is the hamburger I had for lunch. Oh wait, I had that same hamburger three days in a row. Or was it four? Whatever the case, know that I haven't forgotten you, dear reader. In fact, the only thing I want to do besides never climb another stepladder is to one day tell you all about it. At the moment though, I'm too sunburned, numb and sleep-deprived to do it justice so I leave you with friend of the blog Chuck Liddy's time-lapse of Edwards and his lawyers morning arrival. That's me - fifth from the left - dressed in light clothing and wishing I'd listened to my dear old Mom when she said I'd better put down that ratty paperback and focus on my studies. Now if you'll excuse me, I have to go sleep six hours and get up to do it all over again...
Posted by Lenslinger at 10:01 PM 3 comments:

Snide Goeth Before the Fall 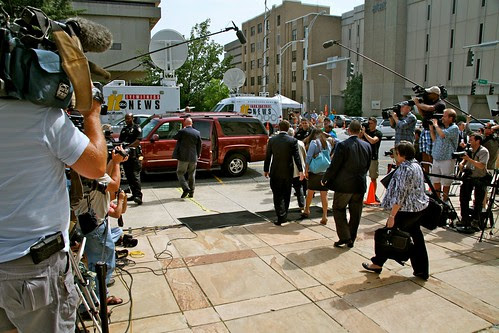 When John Edwards' federal trial kicked off a month or so back, I was more than prepared to loathe him. After all, the former Senator hastened his wife's demise with an unseemly affair, a surprise love child and more lies and alibis than his staff could categorize. He played a doddering old widow for every dollar he could get, financing his fling with ill-gotten dollars while hectoring America about its conscience and poverty. Did I mention the sex tape he made with a self-avowed videographer? Yes, there are many reasons to hate on this tarnished golden boy. Not that I have much malice on tap. That takes energy I ain't got, not after perching atop a step-ladder as the planet's most vilified widower shuffles to and from his date with justice. All I could really work up is a case of distaste and even that was rooted more in my aching back than any sense of chivalry misspent. But a funny thing happened on the way to the whipping post. I started feeling sorry for the dude. Not full-on pity mind you, just a gnawing feeling in the back of my brain that the philandering candidate is taking it on his telegenic chin.

It's a feeling I first got Friday afternoon. By then the jury had deliberated for only an hour, but to the throbbing mosh pit of photographers stationed outside, the verdict loomed barely out of reach. The pieces were certainly in place. A podium stood at the top of the steps, ready to prop up any displays of grace. With cables splayed this way and that, the fleet of sat trucks idled in anticipation. Public stoning or tearful atonement, whatever was about to go down would soar to the heavens in righteous hi-def. You can imagine our surprise when the Marshall charged out of the building, insinuating to many they might want to man their fancycams. Seconds later, the reasons became clear when who else but Johnny Edwards rounded the corner of the federal courthouse, jaw firmly set, eyes scouring the middle distance. Seems he'd tired of waiting for the jury inside, so he'd stepped out of the back door and found the feds in charge wouldn't let him back in. He had to walk around to the front, where a living, breathing gauntlet hardened in the midday sun. When suddenly he did appear, those walls of glass began to crack.

Though most of us stayed atop our stools, several shooters broke away and rushed the once viable Vee-Pee pick. Edwards didn't make sound as the lenses moved in, his jaw remained set as the rude questions rained down. I myself was among the throng, though mostly to prevent my chief from backpedaling into traffic. Before I broke away though, I got a good look in John Edwards and to my consternation, his gaze remained hollow. What must be going on in that carefully coiffed head, I thought. Dude did wrong, no doubt about that. But this plunge from grace is picking up speed and I can't help but wonder how that loss in altitude feels to a man so staggered by his own swagger. Will I set down my camera and try to hug it out? Not unless I want to taste pavement. But I can no longer pretend the man is pure evil, for the last time I checked, we all fall short of the glory. Should John Edwards do time for his distasteful behavior? I'll wait for the jury foreman to clear his throat. Meanwhile, let he who is without sin cast the first update. Me, I got my hands full.