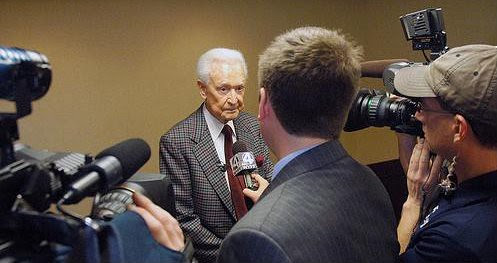 Thing is, he KNOWS you've seen it. What red blooded American news crew hasn't? After all, that scene where Bob Barker wipes the golf course with Adam Sandler is considered one of the greatest movie cameos of all time. So while that skinny microphone shtick may make it with the ladies on Aisle 5, this legendary game show host must realize that to a large swath of the population, he's that old cat who kicked Happy Gilmore's ass. Which is precisely why I wouldn't bring it up should he blow through my town. So far he hasn't. But he did drop in on a certain bohemian hamlet to my immediate West. While there's no official tally of how many pets he spayed and neutered with his bare hands, I'm told by my friends at Ashvegas that he didn't drop a single photog while he was in town. Phew! Clearly no one challenged him to fisticuffs, no one disrespected lovely Janice, no one stepped up and told him, "The Price is Wrong, b-”

Well, you get the idea. Celebrities are a prickly bunch. Sure, they may flirt and twinkle with TMZ, but when they wander far from Hollywood, they're best left unprovoked. Take it from me; I once asked Garth Brooks if he ever tired of singing that 'Achy Breaky Song". He laughed and I was emboldened. Several weeks later I jokingly told Richard Roundtree of Shaft fame to "Shut yo mouth!". He didn't, but he gave me a look that caused me to spend the rest of my time at that celebrity golf tournament wishing I'd shut mine. So the next time a showbiz legend, sports icon or washed up soap star finds themselves slumming in your zip code, tread light-ly. The only misconception you'll shatter will be your own and if any fans are tagging along, they'll rip your throat out at the first sign of anything but fawning respect.

Now if you'll excuse me, I believe I see Mr. Leno over there. Wait'll he hears these knock-kock jokes I wrote down in ketchup...
Posted by Lenslinger at 5:44 PM 2 comments:

From Messiah to Pariah 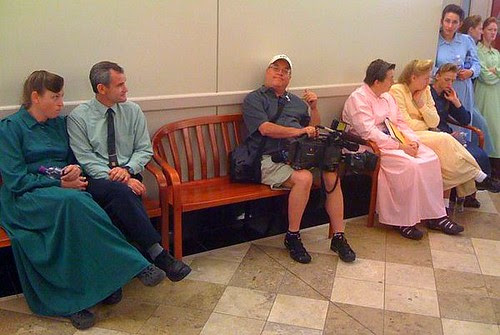 Sure, that fancycam feels good on your shoulder, but if you're going to carry it around for any length of time, you'll have to get used to uncomfortable situations. I'm not talkin' cop car cockpits either, (though two hours in a tricked out Crown Vic with a certain type of officer will leave permanent scarring). No, I'm talking about the derision heaped on any news shooter brave enough to wander away from the waterskiing squirrel convention and toward, say, the courthouse. That's where you and your lens will plunge to new depths of unpopularity, for few folks want to be on the tee-vee when they're facing charges. It's something every photographer gets used to. Depending on your location, you can go from rockstar to leper in the time it takes a rickety elevator to dump you outside Courtroom "C".

Why in my time under the glass, I've been heckled by hippies, threatened by meth-heads and spat at by shackled madmen. And that was just outside traffic court! Move a little higher up the judiciary scale and you'll find all kinds of open hostility. I once had a dentist who was accused of fondling his unconscious patients act like I was the lecherous perv. Murder suspects and their weeping mothers have unleashed the kind of bile on me you usually have to watch a Lifetime movie to witness. More times than not, you're powerless to retaliate but I have found that a shit-eating grin and the occasional 'Enjoy your jumpsuit!" will silence the especially testy defendant.

Yes, I dare say I'm impervious to the kind of hallway taunts our justice system has to offer. Until I saw the above photo, in which a stoic shooter sits center square while a whole bunch of scary polygamists people mumble turn-of-the-century curses at the filthy fornicator in their midst. That his buddy thought to pop off a shot of his pain only makes him one of us. Now if you'll excuse me I have to go to the restroom. Seems the lady in the beehive threw some kind of hex on my nether region and I have to go change my underpants.

One Hump or Two?

It doesn't take a lot of fancy book learnin' to note the similarities between the camel and the lowly photog. The sand-scoured hide, the lumpy silhouette, that whole thing with the spitting... Okay, so that's just me, but the fact of the matter is we camera-humps gotta stick together, After all, a great culling of the herd is upon us; if we're to survive at all we have to do more than carry harems across imaginary deadlines in the sand. We must (gulp!) evolve. Now, this isn't gonna be one of those breathless screeds in which I compare the post-modern photojournalist to crippled antelope or crushed flowers... Those were fun to write the first twenty times but by now everyone knows a reconjiguring of the Fourth Estate is well underway, right? Right?

Depends on where you sling that lens, I guess. Out in L.A., where the Dashing Dave Malkoff snapped the above photo of his partner for the day Scott Moultin, natural selection still seems to be the order of the day. Sure there's a new breed of news gatherer lurking around the edges, but if you're going to chase gangbangers or even Michael Jackson's brain, you better pack on the taxonomy. But here in the Carolinas we're a bit more fluid with our DNA. Reporters packin' glass, Photogs firing off questions, producers learning to Tweet between trip to the break room and their rundowns. What's next? Cats and dogs going LIVE together?

Don't answer, as I'm not sure I want to know. What I would like to find out is when all this evolution reaches its natural conclusion. I'm guessing 'never', for just as soon as we master the demands of the 24/7 news cycle, Apple or somebody will unleash a new iLid Flip-cam and even multi-tasking stevedores like me will be out of a specialized gig. Will the viewer benefit? Hardly matters. When the elders of news film were supplanted by youngsters with video-cameras back in the early 80's, no one stopped to ask whether the public wanted to watch their train wrecks in smeary beta-tape. They just did it and before you know it folks across this fine nation were watching ribbon cuttings, traffic jams and bake sales LIVE as they happened.

Was it progress? Who can tell? All I know is someone better slap a logo on that camel before it's replaced by an ostrich with a handycam strapped to its ass...
Posted by Lenslinger at 8:48 PM 1 comment: