Down in a Hole 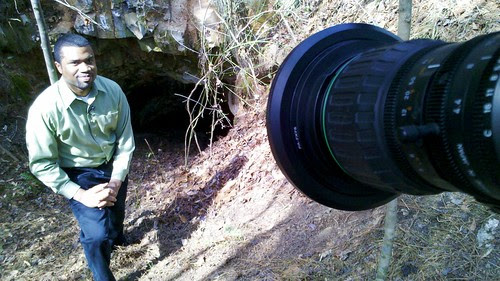 We were just outside Khaddaffi's hidey-hole when the laxatives kicked in... Okay, so that never happened but when you're humping gear under heavy deadline, you never know where you'll be forced to offload, er...upload. Which is why it's important to have a partner who can pull you up when you're stuck in the dumps. Take Charles Ewing - but don't think it'll be easy. Dude's a stone-cold prognosticator with a black belt in News-Fu. Sure, folks know him as their weekend weatherman, a genial bloke whose gravest hope is that you pack an extra pair of galoshes in your kid's lunch tomorrow. But come Monday, this mild-mannered meteorologist transforms into a tracked-package assassin, a cross-trained field operative who can break down a city council impasse in ninety seconds and tell you why it's gonna rain in five. That's a malleability I admire, which is why I never duck and cover when I see Chuck comin' with a crumpled piece of paper and a certain look in his eye. Many a morning he's dragged me out of the building and into some foolishness in the name of news. Does your weather guy do that?

Mine does, and though he might rather be holding down the green screen back at the shop, he's evolved into quite the safari partner. Why, just in our sporadic collaborations, we've drummed up conundrums, stared down rare scenarios and processed more oddities than most veteran detective teams. Call it a by-product of the grind, an accumulation of minutia so diverse it starts to wear away at your frontal lobe. Thus, my recall is less than total. I don't remember everything I shot last week, but I hold hazy frames of Charles in my head from half a decade back. There was the time we chased chatty hoarders around that Goodwill Store, posed as museum pieces at the Rosenblum Institute, turned day-old storm damage into breathless updates and fended off apoplectic residents of a most glowering inferno. Yes, the good Mr. Ewing and I have had many a misadventure and while this may read like some farewell piece, Charles and I ain't goin' anywhere. We're both fathers of two who count ourselves lucky to have a job we can rarely mail in. We may not chase down fire trucks unrequested, but when a subject matters gets in between us and our lunches, you'll not find a more focused predator than this brashly placid forecaster. Just don't mention the goldmine.
Posted by Lenslinger at 9:42 PM No comments: 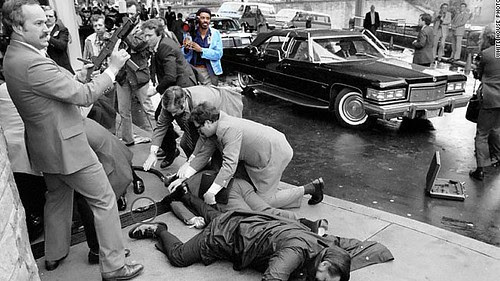 Hank Brown was there to spray the place, not witness a ripple in history. But that's exactly what he bagged on March 30, 1981, when a young John Hinckley reached down into a very dark place and pulled out a pistol. Brown was thirty two and a Vietnam vet the day ABC paid him to wait outside the Washington Hilton. He and the other lenslingers in attendance weren't expecting much more than a wave from the newly elected President. What they got was shot at immortality, though they couldn't have known then that the next few seconds would hiccup into infinity, looping back on itself forevermore on a distant invention called the web. When Hank Brown saw the bodies fall and the gunman crumple, he kept clear of his own trigger, letting the RECORD light shine in the corner of the screen as as chaos spilled onto the street. It wasn't easy...

"I had to keep telling myself, 'Hank, do your job. Keep rolling. If you do it, it will help ABC and the police..."

He was right. The evidence Brown (and others) provided helped a nation grasp the unimaginable and it set in motion the notion that America's fortieth President was made of more than flesh and bone. That's still being debated, but one thing's been certain for thirty years now. Hank Brown stepped up and stood history down. Will YOU be as ready?
Posted by Lenslinger at 3:09 PM 4 comments: 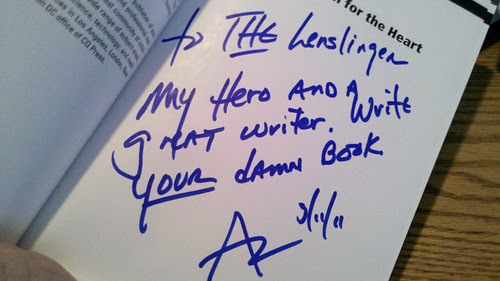 For the moment I'm low on overblown prose, so let me extend a simple word of thanks and be done with my day. Last week, my youngest handed me a package she found on our front step. I was in a bit of a cleaning frenzy at the time and didn't give it much thought, but when I tore into it later I was delighted to find not a voodoo doll with a camera on it shoulder, but a brand new book I already hold dear. The second edition of Al Tompkins' Aim for the Heart, to be exact - a tome I loan to anyone smart enough to notice it on my desk in the newsroom. Last year in Vegas, I sought and received counsel from the man behind Al's Morning Meeting. He and Les Rose were more than generous with their time and I walked away with a head full of advice and a belly full of beer. Nearly a year later, I haven't forgotten that encounter. But neither have I acted on their shared wisdom of two men who populate a plane of existence of which I too aspire. Now this: a bound reminder of what determination can do, a talisman suitable for shelving. But I didn't just toss Al's book aside. I opened it and there I found a dare. Both naked praise and blunt instruction, its message was written in a language this simple news shooter can grasp: "Write YOUR damn book."

Heh. I feel as if I already have. And while it takes more than stream of consciousness to craft something someone wants to buy, I KNOW it's within my ability. That hasn't always been the case, as just ten years ago I was telling my wife how I wanted to take an evening college course in creative writing. Well, true to form I never made it to class, choosing instead to hammer out my yammerings and post them on-line; first on industry message boards and then on that emerging platform known as the blogosphere. Aside from wooing my wife and siring pretty kids, it was the best unconscious decision I ever made. Okay, so at no time was I bathed in ethereal light. I just followed an old friend's advice on writing: Put Ass. In Chair. That I did, night after night, until my alluring wife threatened to torch my computer if I didn't come to bed and get some perspective. My postings leveled off and my marriage improved. Now, I come to you from the deepest reaches of the Lenslinger Institute, a cameraman in full. All I really need are six extra hours a day, a focus honed from years of perfecting my stare and perhaps a tonic for my thinning hair.

Yes, nearly six years into this silly site, I'm no closer to writing a book than I was back when I was deciding if Lenslinger should have two esses. I went with one of course and never looked back. Doing so has enhanced my life in more ways than you can imagine. No real dollar signs have followed, mind you, but if appreciative e-mail were the coin of the realm, I've be swimming in the bucks like Scrooge McDuck. As it is, I'm still a man without an empire, but the stars seem to be aligning as of late and I'm increasingly convinced that where ever the hell this obsession is taking me, I haven't yet reached the end. Whew! I was beginning to think I'd peaked back when I was fawning over some dude named Daughtry. Turns out, I'm still gathering steam, though I do reserve the right to become derailed every so often. You'll know it when it happens: my output wanes as I cloak myself in melancholy. Hey, I think Shakespeare said it best: Shit Happens. Now if you'll excuse me, the bride says it's bedtime.

Some orders you don't ignore.
Posted by Lenslinger at 7:10 AM 1 comment:

Hey, stations! Tired of buying those pesky video cameras? There’s an app for that! And those lippy schlubs who think portage is art form? Can the lot of ‘em! All your really is the iPad 2 and a pretty person to hold it. So finds the fine folk at WKRG, who recently sent web reporter Lauren Styler out to cover a story with little more than the trendy tablet. Okay, so she had a photog trailing her and the whole purpose of the shoot to see if it could be done, but you’ll understand if I’m a little put off by the casing of my replacement. I don’t want to say it’s a watershed moment, but I think I know how Ah-nuld felt when the newer Terminator poured in under the door. Obsolescence? You’re soaking in it... I just hope I’m (not) there when The Suits inform the photogs their services are no longer needed, now that a direct descendant of Merlin is riding high in some spokes-model's purse. It’ll be like telling a kitchen full of career firefighters they’re being replaced by six ashtrays and a George Foreman grill.

Don’t get me wrong. I’m a HUGE fan of Apple. They’re like the R&D department of the entire computer industry. But just because something is technically possible doesn’t mean it’s a good idea. (Snuggie, anyone?) And while most of my ire is pure writing device, I gotta ask: Is using a futuristic tool to shoot the same old song, dance and extended stand-up progress at all? Perhaps, but no amount of magical gadgetry will make up for a lack of imagination and we as an industry are as low on original vision as we’re about to be on fresh videotape. So you’ll excuse me if I remain unconvinced, for any report that ends with the line “Time will tell” is about as cutting edge as that Carpenters 8-track stashed in my attic. Besides, can an iPad 2 get you lost en route to the story, then make up for that lost time in the edit bay? Can it waltz through a crowded ballroom dressed like a roadie and not feel the lest bit self-conscious? Can an iPad 2 trade off-color remarks with its buddies at wholly inappropriate times?