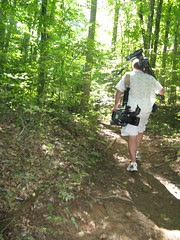 Note to Self: The next time a man in a Smokey Bear hat tells you the field trip kids are j-u-s-t down that trail, ask to see his credentials. Then remember park rangers don’t measure distances like normal people. Apparently, they estimate acreage by the number of woodchucks gestating in hollowed out oak stumps. That, or Ranger Rick wanted to watch the news crew suffer, because a half mile into schlepping my sticks, lens and self through the Piedmont’s newest state park, I’m pretty sure I felt binocular spots burning on my lower back. Soon after that, I lost consciousness altogether - a little trick I use whenever my camera strap tattoos the word ‘Porta-brace’ into my sternum while an aging tripod makes mincemeat out of what used to be my right shoulder. It’s a defensive mechanism I picked up during the great golf cart shortage of ’98 - when I was forced to traverse the entire North Carolina Zoo without so much as one of those six dollar Cokes they sell at the Pavilion. Today there were no great caged beasts to hurry me along my way, only spider webs waiting to wrap around my face once I began trudging uphill. 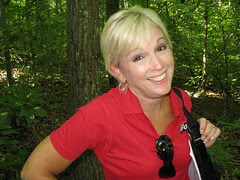 Not that I was alone. In fact, a local icon brought up the rear. Cindy Farmer, known to scores of viewers as Brad Jones' tee-vee wife, has anchored our morning news ever since I first branded myself with the El OCho logo. Before that she emoted on cue over at The Deuce, a protracted stint which more than established her as one of the Piedmont's primary sweethearts. These days, Cindy's a Southern fried Soccer Mom - not to mention the veteran of a thousand newsroom wars. She's also the kind of on-air talent that could host a telethon in her bathrobe and still engorge the toteboard with her goofy charm. If it sounds like we're particularly tight, we're not. But I've worked with her often enough over the years to establish an easy rapport. Yes, whether we're fighting our way through a mob of juiced-up third graders or tracking middle schoolers ever deeper into the Carolina jungle, Mrs. Loo-Hoo and I can usually do so without drawing too much blood.

Just don't ask her about her Alma Mater. There ain't enough trees in the forest...
Posted by Lenslinger at 9:49 PM No comments: 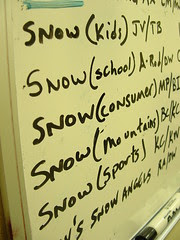 Ah, the morning meeting - where the denizens of your local newsroom gather to decide what will appear on the news that night. It’s fast-paced, wide-ranging and without a doubt, my least favorite part of the day. Why? Oh, I dunno - that feeling of utter helplessness as some former intern pitches his opinion of how I should spend my day…that trapped-gas sensation in my lower abdomen as some producer eyeballs me while recounting the wino revival she passed on the way to work …the rising bile in the back of my throat as an indifferent manager banishes me to twelve hours in a far flung live truck with the flick of his well-oiled Sharpie. Yeah, most days I’d rather take a two-by-four to the face than watch my immediate fate ricochet around a small conference room.

Neither am I alone in this opinion. Four out of five station employees with double A’s in their pockets would choose six hours of painful constipation over twenty minutes of editorial orgy. Thus, many lensers avoid the morning meeting altogether, choosing instead to gather batteries, check b-roll or trade dick jokes while their perceived superiors wax all philosophic-like about viewer benefit, ‘big sticks’ and show flow. Though I’ve never counted myself among these stoic hold-outs, I’ve always kind of envied their Zen. After all, sauntering into the newsroom and accepting your assignment without rebuttal, rhetoric or retort is The Mark of a Pro, a sign you can handle anything the desk throws at you without letting it make you crazy. That’s bad-ass, but it ain’t me.

No, I usually slink into the morning editorial meeting before most photogs have even made it in to work. There I stand in the back of the room like a professional gambler deciding to which table to play. I don’t count cards, but I do examine the odds. Are there more photogs on the board than reporters? Are all the live trucks up and running? Are they still looking for some schlub to cover that licorice enema convention on the edge of town? Am I a good enough actor to feign explosive diarrhea should they want me to follow up on that disturbing discovery down at the landfill. Naah, I’d never fake a malady just to get out of a story, a live shot or unsavory partner for the day. I will however, blink Morse Code to the person manning the dry-erase board- in hopes they’ll gather from my facial tics how very much I’d like to avoid covering the hillbillies picketing outside the sauerkraut plant. If that’s wrong, don’t look for me to be right.

Now, were I smarter, more industrious and a little less addled, I’d swagger into each morning meeting with a list of air-worthy stories I’d already cleared for take-off. But frankly, I don’t start thinking about the upcoming news day until I throw my pick-up in Park and walk past the satellite dishes. Otherwise, I could hardly call myself a photog, now could I? It’s all I can do most days to scan the list of story ideas for something visual, then try to be in the right place when the managing editor tires of the chit-chat and starts hurling thunderbolts around the room. Thankfully, the show producers seem to value my reporter-free productions enough to lobby for me to work alone whenever possible - provided it doesn’t tear them away from their first bagel of the day too much. Of course if I'm lucky, I avoid the morning summit altogether. By the time the suits have laid out their battle plans, I’m already out somewhere, lining up my Sony’s sights and pulling the trigger.

Then again, there are too many times I wander out of my daydream and into a newsroom battle-zone unarmed, whereupon I quickly catch a mortar-shell of a story to the chest.

"Hey guy, load up in Live 13! We need you and Sue McNewbie out the door! We gotta play catch-up on that meth-lab massacre up in Orifice County!"

And they say you never hear it coming...
Posted by Lenslinger at 9:21 PM 9 comments: 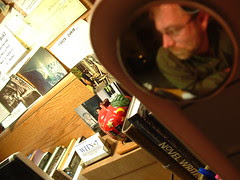 Those of you still visiting this humble site may have noticed I’ve slowed down a bit in recent weeks. Sorry, but the portion of my psyche that cranks out self-satisfied diatribes has been waning as of late. This vexes me more than it does you. See, I write this blog for my enjoyment - not yours. Sure, it’s nice to get comments and I do enjoy being approached by the occasional stranger - but I’d still etch dusty couplets on my unit’s windshield - even if I couldn’t share them with a couple hundred generous visitors every day. That so many of you have reached out over the years and expressed an interest in what I past here has been a delightful surprise. It’s encouraged me to keep trying, to ignore my total lack of formal training and plow forward as if were really a Wri-TOR - not just some photog with an adjective habit. But before you admonish me for selling myself short, know that much if it just an act. Mama taught me to be humble. Deep down inside, I’m often convinced I’m the smartest guy in the immediate vicinity. Being that I spend a portion of every afternoon in a TV station newsroom, that ain’t sayin’ an awful lot. Speaking of not saying a lot, that’s what I logged in to talk about, isn’t it?

I think it is. Truth is, I’m not really sure. All I do know is the words, ideas and opening lines haven’t come very easy lately. That’s a change from the norm. Having spent four years of weeknights brooding over a hot laptop, I’ve learned how to dictate from my head. ’Linear thinking’, Ernie Pyle called it: the ability to carry a notion from raw thought to a finished sentence without losing sight of everything else around you. I’m not sure I could do it amid the chaos of mechanized battle like Ernie did, but I’ve gotten pretty adept at planting myself in this godforsaken ’bonus room’ and conjuring up a trance. At times, it’s been so very easy: sit down with the vaguest of ideas and watch my fingertips flesh it out. Set the bar low enough and you too can succeed. I have, but then again I’ve always been good at intangible things like trivia, language appreciation and the Dewey Decimal system. You oughta see me arrange my personal library by genre, author and book size. I’m an animal.

Just the other night my bride and were watching ‘Castaway’ - that mildly serviceable Tom Hanks yarn in which he tap his inner Selkirk. Watching the everyman actor stumble around a deserted island, I found myself wondering how I’d fashion writing material out of all that saltwater and sand. Meanwhile, the wife drew out 3-D plans for a shelter that would make those Survivor yaks stab each other in their sleep. I love that woman - even if she does think I play Donkey King every night after she goes to bed. I try and tell her sometimes I‘m actually pouring my soul into a homemade website, but every time I do she threatens to be me a Wii and be done with it. I can’t afford that kind of distraction. Neither can I afford to stop posting parts of my brain here at this very web address. Professional therapy’s just too damn expensive and my sense of self-worth would surely plummet should I be forced back into off-camera seclusion. So bear with me dear reader; know that I’m as enthused about this little project as I’ve ever been. But much like the gifted Rick Portier, I’m making this shit up as I go.

Whadaya expect for nuthin’?
Posted by Lenslinger at 9:33 PM 4 comments:

Hands Off the Android! 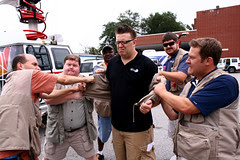 While I claw my way out of this malaise, check out the latest from a photog who never seems to get down. JL Watkins has worked his last day at WYFF. Seems the man-child known as Little Lost Robot is following his more conventional half to Houston where she'll helm another newsroom (when she's not busy explaining her kooky husband). Before he left however, Robot left us photographic evidence of just how they get down in the lesser of the Carolinas. Apparently, they "jump-out" the offending lenser, de-vesting the pooor bastard and very possibly driving him to the state line. Interesting. When someone leaves El Ocho we usually just take them to lunch, maybe give 'em a card. Then - when they're gone - we gather around their locker, talk maximum smack about their lack of shooting skills, then promptly pillage their gear. Not the 'bot. By now, he's probably rid himself of whatever Carolina accent he picked up and is busily reinventing himself. I can't wait to see what on Earth he'll resurface as. I'd be surprised if it were merely as a photog, though. Dude belongs in FRONT of the camera. Hell, he needs his own reality show.