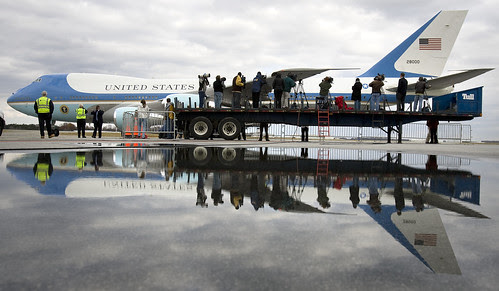 For all the words I used trying to describe my ride on Flatbed One, Jerry Wolford summed it up in a single frame. Actually, I bet the News & Record photographer popped off more than one shot as he lay in front of that puddle of standing water. I myself watched him recline there for a good ten minutes, before turning my attention back to the jumbo jet in question. While I transmitted pictures that dissipated on impact, he triggered an image that'll last forever. The nerve of that guy...
Posted by Lenslinger at 6:38 PM 6 comments:

His Cubicle a Kingdom

So here I sit, clicking around for something to blog about and the internet burps up John Brummett. No, I've never heard of him either, but apparently he's a very big deal in Arkansas. Why else would he weigh in on the efforts of a medium he considers so beneath him? Could it be he's a higher life form than the rest of us? Or just some deskbound gasbag who's not dealing very well with the death of his discipline? You decide, I'll report:

Our story begins in Little Rock, where local affiliate KATV 7 is trying out a new newsgathering tactic on their website. 'Choose Your News', they call it; an interactive feature that allows viewers to pick a two-minute news story from a pre-determined list. The story that scores the most votes will be covered on-air, via Twitter and anywhere else KATV sees fit to stick it. Is it revolutionary? Not really. Is it a little cheesy? Certainly - and for my liking, w-a-y too candy colored. But I'm guessing none of that bothers terminally cute Kristin Fisher who wrangles and fronts Choose Your News both on-line and on that magic box in your living room.

John Brummett, on the other hand, is stricken with indignation. Seems he's a Columnist/Reporter for some-thing called the Arkansas News Bureau and he doesn't cotton too well to the unwashed masses being in charge of their news line-up. I also have it on good authority that he's vehemently against ball-point pens as well, for they can't possibly compare to the old school etchings of a trusty No. 2 pencil. Okay, I made that last part up, but judging from Brummett's turgid dismissal of Choose Your News, I wouldn't be too shocked if he were anti-eraser as well. But enough of my derision; let the man speak for himself...

“I am so old that I remember when news professionals - trained news hounds who got called editors - beheld the contemporary landscape each day and decided with supposed professional and experience-seasoned expertise what to assign reporters to cover. We didn’t take a poll. We didn’t ask anonymous yahoos with laptops and BlackBerrys and other telephonic gadgetry to click on some icon and dictate our activities.”

Uh, John? Those 'yahoos with laptops' are/were your readers. They've got Twitter accounts and magic Crackberries, blue tooth gizmos wedged in their ears and cell phones that can launch space shuttles. They've got home computers that can replicate the output of some TV stations I've worked for and Tivo's that know which episodes of 'What Not To Wear' they've already seen. What they probably don't have is a newspaper subscription. Even if they do, I doubt they have a dying need for some troglodyte in a clip-on tie to tell them what the world (or even Arkansas) looks like. That three-masted vessel has sailed, my friend and it took my job security and your overly-developed sense of entitlement with it. Surely they printed something about in your paper. Go grab it out of the drive-way... I'll wait

Oh - and just so you don't think I'm some Millenial in a spangly t-shirt, a little disclosure: At almost 42, I'm closer to your age than that of Ms. Fisher. While I do work for one of those crass television stations, I consider myself something of an ex-patriate. I've many friends in the newspaper industry and while I consider them some of the smartest people I know, humility ain't their strong suit. Even those few, who - as you apparently do - consider all this new media just a passing fad, are smart enough to keep their beliefs off the opinion page. Why, your printed assertion is about as silly as us TV folk getting all worked up over this. It's a new world, John. Everyone in corporate media is feeling the rub, from the bloated columnist who considers his cubicle a kingdom to the overly verbose cameraman who sits up all night surfing around for inspiration.

Just try not to make us look so bad, would ya?
Posted by Lenslinger at 11:10 PM 4 comments: 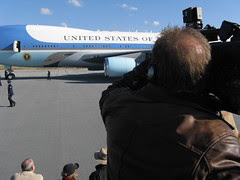 Say what you will about Dubya; the guy’s on time. He and Air Force One swooped down from the heavens right on schedule today, rolling to a stop in front of a camera platform filled with shivering press. I was but one among them, a flinty lenslinger squinting into the morning sun as jet fumes permeated my every pore. That’s right: I got sucked into the mix. What can I tell ya? One day I’m stalking housewives at a discount thrift store, the next I’m being felt up by a guy in camouflage while two of his buddies fondle their wands. Turnabout’s fair play, deputy- but unless there’s more in my pockets than a couple of half-dead Double A batteries, can we skip the orifice probe ... please? I am a married man. Hmm? Right - where was I? Oh yeah, freezing my tripod off in front of the Decider in Chief. Yeah, by the time he emerged from the depths of his most tricked-out ride, I’d been on scene for nearly three hours. But I hadn’t spent the time daydreaming... 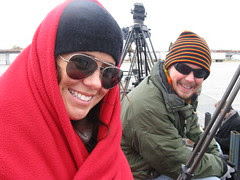 Instead I tore through my morning with Presidential zeal, deciphering the many conflicting edicts handed down by men with sunglasses and sour dispositions, grappling with testy electronics and - as always - carrying out the mission and whims of my perceived superiors. There were times this morning I feared my cell phone was going to burst into flames from sheer overuse Who gets dragged off to Guantanamo Bay if that happens - HMMMM? It won’t be the weather bunny. Anyway, let’s review: It was an early morning and quite the cold one. I presented my credentials and entered non-negotiations with the Secret Service on the matter of where we local folk might park our TV trucks. After more than a few furtive gestures, it was decided we could perch alongside the tarmac’s edge and thread our cable over the fence. This we accomplished quickly, despite a flurry of calls telling us A.) they’ll break into programming the moment the pilot throws that jumbo jet in Park, B.) the 5 and 6 o clock producers both want separate packages and C.) Can the chatter - we’re streaming this live to the web and that last knock-knock joke was borderline offensive! 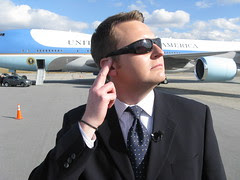 As for the President, he came, he waved, he went. Sure, he presented some elderly women with a service award, but the details of their exchange were lost to the echoes of the tarmac. From where I stood, she could have been Leslie Nielsen in a dress and a shawl, I dunno. What I do know is, no matter how I might gripe, I’m well equipped to ride this flatbed trailer bound for nowhere. The people beside me are cool - if not a bit smart-alecky and who really needs feeling in your face this early in December, anyway? Pointing a camera at an airplane doesn’t require too much skill and after a nice quiet Thanksgiving break, I’m just the man for the job. I just worry about Chad. All was going well with my reporter for the day until those civilians took one look at his sensible dark suit and mistook him a Secret Service Agent. At first he laughed it off, but now he’s talking into his shoe again.