I've been told I need to smile more in photographs. Piss on that. If I got any giddier, they'd kick me out of the news shooters union, for a thousand yard stare is simply the price of admission. In person, I'm almost jovial ... ya know, in a morose kind of way. More than anything, I'm a product of conditioning. And for the past two decades I've been conditioned to squint through things... windshields, lenses, Wendy's milkshake lids. Is it any wonder I wear a poker-face? You would too, had you waded into places where you either weren't welcomed or were fawned over to the point of kidnapping concerns. It ain't me, mind you. It's that Sony on my shoulder. People tend to genuflect in its presence. That, or they simply skulk out of the room. I have to chase them either way. Some run. Others stop, drop, pop and lock. One guy in shackles wanted to 'take me back to the double-wide to see if I bleed'. I declined - using the exact same facial muscles I employ to wave Goth kids off at the county fair.

Hey, YOU roll up to a City Council meeting or a crowded kindergarten class without your mask of apathy intact. They'll make you eat paste! And those little kids can hassle you too, though a room full of jacked up five year olds still pales in comparison to one low-level wonk in search of a constituency. Don't believe me? Lock eyes with an assistant city manager who wants to get his no-kill litterbug campaign off the ground. You'll wish you covered your face in Saran Wrap. Also, appearing vaguely constipated discourages looky-loo's from approaching the glass. 'You there, throwing devil horns and screaming 'Hey Mom". Your mom ain't here. She's tied up back in my live truck telling all your secrets. So if you don't want me spreading details of your chocolate bath habit across seven contiguous counties, you will back the fudge up.'  Now, I of course would never SAY anything so rude to the people who pay my bills, but if I scrunch my eyebrows together and channel Chuck Norris just right... 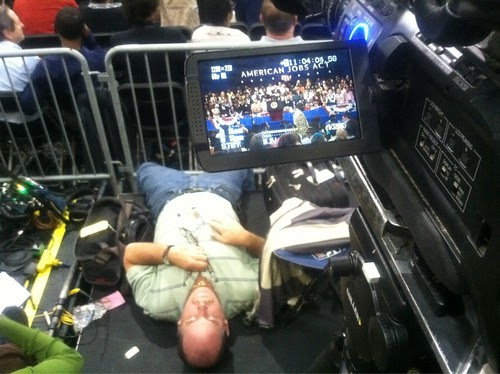 How do you tell the local news crews from the network guys at a Presidential Pit Stop? Simple. During the inevitable downtime before the leader of the free world takes the teleprompter, the locals will mingle and chat. Those jet setting network techs, meanwhile, will drop like soldiers coming off a three day hike and get some shut-eye in front of God and everybody. At least that's what fellow local Chris Weaver found today while he waited for President Obama to put out his smoke polish off that orange and speak to the people. By the time he did, I'm sure said soundie was in an upright position, for you don't hold onto a gig like that by lying down on the job. You do, however, earn the right to be pixelated on these very pages, for there's nothing like a supine audio technician to convince me I made the right call when I dodged the latest round of Obamathon. I'm sure he'll be back in no time, for North Carolina is shaping up once again to be a battleground state and you know what they say, " An Army travels on its back, er, belly, er, battery belt... Now if you'll excuse me, I gotta go stretch out on the floor and snore some more.

How else will I ever go network?
Posted by Lenslinger at 9:19 PM No comments: