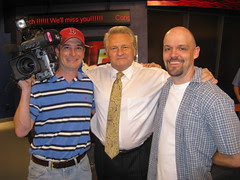 Much has been written about the passing of Rich Brenner and deservedly so. In his time on this planet, he defended freedom, inspired excellence and cut great swaths through mundanity. Most folks knew him as the consummate sportscaster, a commanding presence in the center of their TV screens. But he was so much more. An innate communicator, Rich Brenner's fierce intellect and oratory horsepower brought refreshing depth to a sometimes shallow field. There was simply no subject he couldn't speak to; just ask anyone who tried to pass him in the hall. Most of us however, were happy to stop and talk, or more often than not, listen. When I arrived at El Ocho nearly fifteen years ago, it struck me that Rich was the very heart and soul of the place. TV stations, by their very nature, attract a lot of wayward souls. Over the years, many of those souls looked to Rich for guidance and they got it in spades. He was a father figure to many of my friends and a tireless supporter of everyone he met. That's just how Rich Brenner rolled. Good luck keeping up.

He was known for stinging commentaries, powerful screeds in which he held the sports world to his own high standards. But he didn't engender loyalty among his young admirers with lofty speeches. He did it with comedy. Rich Brenner possessed the gravitas of the Marine Captain he once was, but he often displayed the giddiness of a nerdy school girl. Known station-wide for his encyclopedic recall of Seinfeld lines, Winston Churchill quotes and Austin Powers dialogue, Rich reveled in pop culture and wasn't afraid to express it. His spot-on impression of Dr. Evil will simmer in my brain pan forever. I didn't spend a lot of time in the Sports department. But my lack of acumen there didn't stop him from becoming MY friend. Someone must have told him early on that I was a history buff, for he always came to me with World War II trivia. He seemed impressed that I knew about the fall of Corregidor and we'd riff endlessly on the Pacific Theater. THAT was Rich; he'd find a way to connect with people and make them feel smarter in the process.

After Rich retired, he started popping up on local radio. It was a medium he was made for and his appearances often surpassed the people he was subbing for. I called into those shows whenever I could. He'd put me on the air and we'd talk television. When I'd said my piece, Rich would never fail to heap accolades upon me. It was often over the top and I think we both knew it. But it's awfully pleasant to have a local living legend sing your praises on the radio. In fact, one of the highest compliments I've ever received came from Rich OFF the air. He'd read a recent blog post of mine and went out of his way to tell me how much he liked it. "You're sure not afraid to tell it like it is," he said. High praise indeed from such a gifted commentator. Today, co-workers, friends and family gathered to pay final tribute to this larger than life figure. Outside of my own father's recent funeral, it was the most moving memorial service I've ever attended and I felt honored to be in that room. In fact, I left there feeling downright proud to be a broadcaster, something I didn't think was still possible.

So thanks, Rich, for that one last lesson. As for that higher standard of yours, mission accepted.
Posted by Lenslinger at 10:52 PM 2 comments: 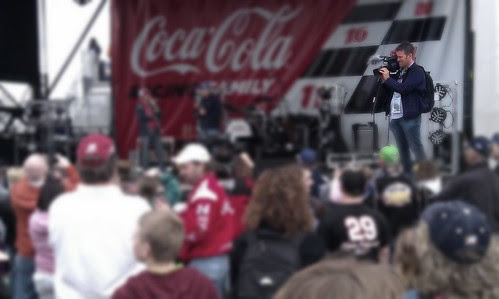 Rain, pestilence, blowed-up jet dryer trucks ... it was a seriously weird Daytona 500. Then again, when is a three hour high speed traffic jam NOT weird? Don't answer that; it was strictly rhetorical. Besides, any time I have questions about stock car racing (a pretty rare occurrence), I go straight to the source: The Weavinator. For damn near two weeks, my esteemed colleague has roamed the Daytona Speedway, camera in hand, backpack in place, blissful grin on his face. I haven't seen him this happy since Eastern Carolina Barbecue was declared its own food group. Still, all road trips must come to an end, so after Mother Nature took a whiz on Sunday's race, Weaver and the gang pointed their own vehicles North and came the hell on home. Some decompression is still needed, but I'm happy to report our old friends is back to speaking in complete sentences (though he does keep thanking the boys back in the shop). We here at Lenslinger Racing are glad the fellas made it back safely, though there's little time for a victory lap. You see...

Only for a couple of days, mind you, and not alone. Very soon, reporter Shannon Smith and I will fly to Los Angeles to work the American Idol red carpet. I know what you're thinking: "Again? Haven't you suffered enough covering that overwrought juggernaut?" Well... no. Yes. No. Truth is, I enjoy my backstage pass, for there's no better way to witness the pangs of adulation than to spend some time inside the soul-warping vortex that is American Idol. Just ask Clay Aiken, Fantasia, Chris Daughtry, Kellie Pickler and Scotty McCreery. They've all passed through my glass on the way to stardom and just trailing in their wake can wreck your perspective. This time it's a lovely young lady named Chelsea Sorrell who's made it into the Top 24 and later this week we'll be in Hollywood to see if she makes the Top 12...

So yeah, even lifer photogs need their diversions. Weaver's got grown men driving in circles, I got delusional ingenues channeling Whitney Houston. Don't judge us!
Posted by Lenslinger at 7:31 AM 1 comment: 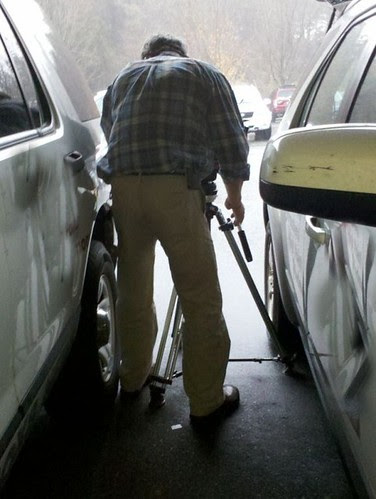 Is it just every shop I'VE worked at, or does a hard rain turn YOUR house cats into Chicken Little? It's like the fine folk who work inside TV stations have simply never witnessed precipitation. That, or they really enjoy thrusting  a co-worker into the suck. Take yesterday. There I was, trying my best to crawl up into the acoustic ceiling tiles, when a senior producer hit me with it. "Dude, it's really pouring outside... can you shoot it?" "S-u-u-u-r-e," I said, as I tried to wiggle through an opening in the overhead duct work, "I'd love to!"

It only took about forty five seconds to exit the building. I would have gotten out there even sooner, but first I wanted to offer a few of my colleagues to chance to take part in an exciting new television production. "Hey, the weather bunny finally pulled a knife on that sports intern! She's in the parking lot right now making him drink mud puddles!" I told a photog in mid-edit. He never even looked up from his timeline. "Yo! A Best Buy delivery truck flipped over in front of the station! There's broken Go-Pro parts as far as the eye can see!" No reaction from the two shooters molesting the drinking machine. "That chick from the Sports Illustrated cover is on the loading ramp! Says she's looking for a man with a fishing vest fetish!" Even the dude polishing his tripod didn't believe me.

Feeling defeated, I gave up on my charades and slunk outside. The producer was right. It WAS raining. In fact, it was coming down so hard I could barely see the outline of my news unit across the parking lot. ACROSS the parking lot! CODSWALLOP! Locked inside that distant Ford Explorer was the high dollar device I needed for the mission at hand (along with a bag of Funyuns I was really craving). Should I make a mad dash for it? Low crawl through the gutter?  Go back inside and cue up footage from the last time it rained? Slowly, I turned...

And that's when I saw him. The Chief. Wedged in between two news cars. Hunched over hot glass. Focused. Stoic. Possibly sleeping. I stood there for a moment, admiring his shot selection and sense of duty. No one probably even told him to shoot the rain. He just... did it. The nerve! Still, I found my own posture straightening, an involuntary response borne of respect and the death of the battery belt.  Should I offer to lend a hand? Begin a slow, steady golf clap? Or drop to my fingertips and low-crawl away before he spotted me?

I'll be washing up inside if you need me.
Posted by Lenslinger at 10:22 AM 1 comment: