Punch-Drunk from the Junket 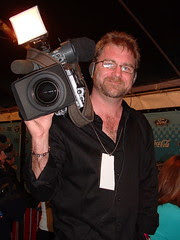 As much as I'm diggin' these trips to L.A., ping-ponging across time zones has left me a little fuzzy around the edges. Not that my kids care; they only know that Daddy's back home and he's a bit more unshaven that usual. So while I attend to their every need, check out the cavalcade of red carpet images I've uploaded and know that a full post is on the way. Meanwhile, I'll be shaking off the jet-lag, chauffering my offspring and sheathing everything I own in cardboard. Oy.
Posted by Lenslinger at 9:06 AM No comments:

Ode to the Road 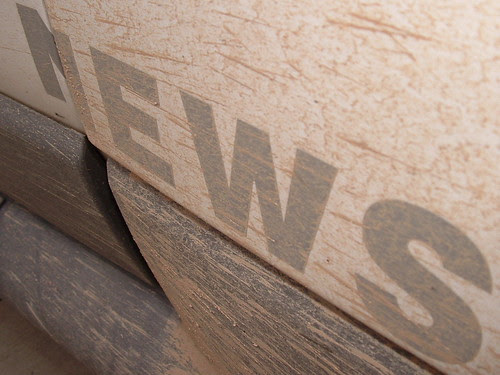 "News doesn't happen in the newsroom." I don't know who said that, but I'd like to buy him a drink in a low-lit dive far from any TV station. It's not that I harbor any disdain for cluttered cubicles bathed in flourescent light; I'd just rather make my broadcast bones in the Great Unkown. Besides, the newsroom's too damn dangerous. Lurk too long in an edit bay hallway and you'll soon find yourself running teleprompter for a jittery anchor candidate hopped up on shiny lip gloss and outsized ambition. No, I feel safest when traversing the region's perimeter, where only inclement weather, impossible deadlines and amped-up rent-a-cops pose any real hazard. Best yet, I'm never alone - as a tattered army of fellow news hunters roam the highways looking for a new point of view on recycled human drama.

So consider this your lenslinger's ode to the open road - the only place I feel in control, out of range and unencumbered. That said, I suppose I should wash my ride. A cross channel camera scrum could break out at any moment and I'd have to explain to my general assignment buddies why the American Idol hack's company car looks like it just came from covering a tri-county tractor pull. Now if you'll excuse me I have to catch a cross-country flight, and leave my mud-caked sled to bake in the sun. Anybody got a chisel?
Posted by Lenslinger at 8:42 PM 4 comments:

Some Days Are Better Than Others 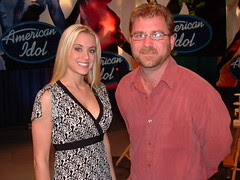 Usually when I'm called into work early, it's either because some jackhole shot his wife, rampant flames are redecorating a home or a parking lot is breaking out on I-40. Today however, I had to scramble into the studio because a statuesque blonde was demanding my lens' attention. I know, I know - tough gig. Five days after being eliminated from American Idol, Heather Cox dropped by El Ocho en route to her parents' Jonesville home. I was pleased to see the composed young lady I met in Hollywood last month was still sporting her winning grin and infectious energy. Heather may not be the American Idol, but she's received one hell of a kick-start on an on-camera career. With her looks and personality, I'm gonna go out on a limb and predict unlimited success. As for your friendly neighborhood lenslinger, remind me not to grumble so much the next time my pager goes off.
Posted by Lenslinger at 8:42 PM 3 comments:

Flee, Glee and the Rise of G. Lee

Despite a surplus of things on my mind, I come to you with precious little to say. It’s not that I haven’t set the stage: my feet are up, Robert Johnson’s on the CD player and I have so much of the wife’s good coffee on board I can feel the blood changing gears as it races through my veins. Still, the words won’t come. Perhaps it’s the myriad of unrelated issues that are ruling my every thought these days; disconnected incidents that are joining forces to form one mother of a blog-clot. Whatever the reason, I have sat here being taunted by a blinking cursor long enough to break down and just blab. I’ll understand if you bail now, for I can’t promise any reader satisfaction is in sight. However, if you’re really bored, settle back for a moment while I tap my inner Kerouac. But be warned, it may not be pretty.

We’re moving! Me and the fam, that is. It’s a long story, but let’s just say all public schools are not created equal. We’ve known we had to leave the immediate area for quite some time now but couldn’t very well do so until we off-loaded our current domicile. Now that the sign in the yard finally sports a fancy ’SOLD’ crown, Operation Cardboard Box is in full swing. A few weeks from now, I’ll load my every possession into a moving truck (or two) and set a Northeast trajectory. Fifteen or so miles later, I’ll reverse the operation, put things where my wife tells me and try to get used to a longer commute. One bright spot: my new home is less than a mile or so from ‘Owls Roost’, one tri-state killer of a mountain bike trail that will greatly assist me in removing the half-inflated spare tire that now connects my waist to my chest. I told you this would get ugly.

American Idol keeps occupying much of my working life. With three North Carolinians still in the nationwide cheese-off, I’ll continue playing caddy to A.I. correspondent Shannon Smith as she documents every facet of the hopeful vocalists’ former lives. Doing so has had had a weird side effect, however . Every day some burly male co-worker or another will corner me, quiz me on my insider opinion, then sheepishly admit they and their families are now watching the show religiously. I usually let ’em off easy by telling them it’s okay before swearing their less than manly secret is safe with me. Occasionally this backfires when their enthusiasm quadruples and all they want to talk about is Chris Daughtry, Buckie Covington and of course, the adorable Kellie Pickler. I don’t dare tell them I’m just days away from jetting back to Hollywood for a star-studded red carpet event, lest they begin to hyperventilate and lose any last vestige of heterosexuality.

Enough Idol, please! What’s far more important to me is the book I’m trying to write, or to be more exact, the book proposal. I’ll keep most of the particulars to myself, but just know this: 18 months or so of constant blogging is starting to pay off. Powerful and generous figures have contacted your lowly lenslinger and convinced him that an anthology of short stories is indeed a marketable possibility - if only he’ll hammer the work into shape and promise to stop referring to himself in third person. He - sorry - I have started to do just that, though I gotta tell ya - re-writing sucks! I’d much rather pound out my thoughts in a rush of creativity and hit the ever so therapeutic ’Publish’ button, than sit and groom my words for maximum coherency. Still, I’m doing it and can honestly look you in the monitor and say, “It’s going to happen.” That’s a bold statement for an underachieving pessimist like myself.

Speaking of thwarted literary ambitions, I’m doing my best to fulfill them all. A few posts back, I unveiled a fictional character that has lived inside my head for a very long time. Garrett Lee Whitaker, or “G. Lee” as I’ve come to think of him, is an alter ego’s alter ego. Through him, I seek to illustrate the sketchy world of street-level broadcast journalism I love to loathe. By fictionalizing some of my misadventures, I can amalgamate my myriad of experiences in a way that won’t get me in the kind of superheated H20 that beleaguered memoirist James Frey now finds himself in. Look for G. Lee to pop up every now and then to add a little color when the real world goes gray. Otherwise, consider him the main character in a long line of exciting novels I’ll probably never get around to writing.

Three of a Find

This past Friday was devoid of any sweeping themes, unless you count the inherent schizophrenia of general news...

I kicked off the first of my three brief stops in the Blue Room of the Guilford County Courthouse, loitering by my tripod as representatives from five different architectural firms tried to convince the assembled wonks they should be the ones to build the new County Jail. Despite a number of eyebrow maneuvers on my part, I could not break the poker-face of Sheriff B.J. Barnes - who was either deeply engrossed in the monotone sales pitches, or merely sleeping with fake eyeballs painted on his lids.

A half hour later I found myself shivering by a dilapidated mailbox as a few of Sheriff Barnes' deputies and a dozen other sworn officers paced outside a non-descript home. The assignment desk hadn't been sure just what was going on when they dispatched me, only that a small army of police and firefighters were descending on the unremarkable address. Fifteen minutes on scene, I was none the wiser, but the way the grim faced first responders kept gesturing toward an overgrown path beside the home told me they weren't there to compare badge numbers. But there wasn't much time to investigate, as impatient lunch-buddies were idling in their own news units at a pre-determined locale.

Too bad I never made it to them. Before I could fulfill my culinary rendezvous, higher forces colluded to send me elsewhere. Which is how I wound up standing in my sock feet in the middle of a crowded mosque while a couple of hundred Muslims bowed in deep reverence to Allah. Through my viewfinder, I zoomed in on the turban-wearing speaker who was railing against the local newspaper's choice of cartoon. As the heavily bearded man worked the faithful into a quiet frenzy, I thought about competiing religions, global politics and a the heavily accented call for tolerance. Well, that's not entirely true. I was still pretty much focused on lunch.