Rock the Sure Shot 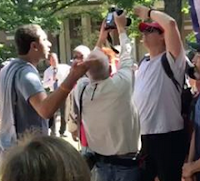 What's with all these protestors blocking photographers' shots lately? That's like sticking up 'Garage Sale' signs all over your neighborhood, then getting pissed when folks show up in your driveway wanting to buy your old toaster.


I don't get it. I've been covering protests of varying degrees since the first Bush administration and I've seen a lot of goofy things in the name of dissent. But a pack of hacks raising a ruckus on public property and demanding the media look away? That's a new one.

In the fall of 2016, angry mobs flooded the streets of uptown Charlotte to protest the police shooting of Keith Scott. I was there among the crush of cops, clergy and anarchists one night when one protestor in particular produced of all things, a bathroom mirror. "The media needs to look at itself!", he screamed as he jammed the mirror into my lens. 'Clever', I thought, as I twisted my torso to turn away from him. But the pack of jackals around me was so tight I couldn't escape the reflective heckler and he succeeded in blocking my shot for several minutes. Luckily, I had a 'security detail' with me that night, which simply meant that a few paces behind me was an underemployed bar bouncer being paid to make sure I made my deadline unmolested. After a few inelegant gestures on my part, I got his attention and he quickly shoo'd Mr. Mirror away.

What's my point? Don't know that I have one, other than to suggest that people who protest in public should fully expect, perhaps even want, to make a headline. Otherwise, might I suggest your organization launch a letter writing campaign, or perhaps a bake sale... just don't be surprised when camera crews show up. See, this sidewalk happens to be our office and we're all under heavy deadline. We may not give one thin shit about your issue, but we care deeply about documenting whatever is about to go down. So, to quote the Beastie Boys, don't come with the rhymes that you just half-baked. And whatever you do, don't try to hide from us.

You won't like how it looks on the evening news.
Posted by Lenslinger at 8:32 AM 9 comments: